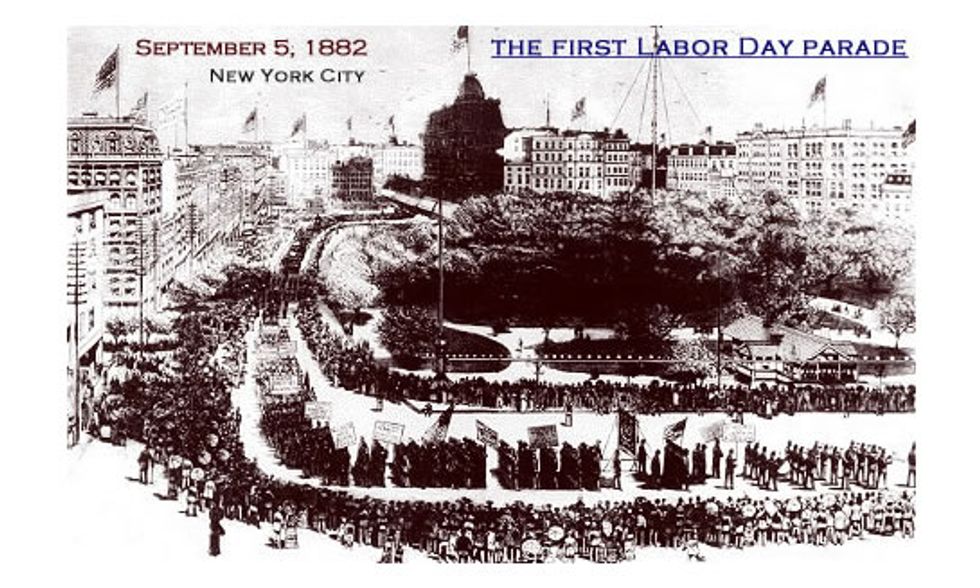 Remember when parades were a thing?

Look at that -- turns out Labor Day is about a bunch of crying babies after all. Let’s wonksplain.

When America was founded by Jesus H. Christ on the third day when he rose from the dead, there were no such things as a 9-5 workday or weekend. Working was fucking awful -- way awfuler than even jobs like blogging where you are confined to your mom's basement until your overlord Kaili is satisfied that you have hit your quota of dick jokes. History.com describes it like this:

“[T]he average American worked 12-hour days and seven-day weeks in order to eke out a basic living. Despite restrictions in some states, children as young as 5 or 6 toiled in mills, factories and mines across the country, earning a fraction of their adult counterparts’ wages. People of all ages, particularly the very poor and recent immigrants, often faced extremely unsafe working conditions, with insufficient access to fresh air, sanitary facilities and breaks.”

Sidenote: If the worst kind of working conditions you face is lifting a pen and signing a piece of paper so that two dudes can be married, maybe you should SHUT THE FUCK UP YOU BIGOTED ASSCLOWN WANNABE MARTYR.

Despite the fact that commie hero Lizzy Warren had yet to be born, some people had the idea that maybe, just maybe, the average worker deserved a little bit more.

In 1894, workers at the Pullman company (a railroad company) decided to go on strike. Why? Because they refused to be thankful for low wages and shitty work conditions benevolently bestowed upon them by Almighty Job Creators. All Hail Job Creators! What was the crying all about?

[Residents of Pullman, Il] all worked for the Pullman company, their paychecks drawn from Pullman bank, and their rent, set by Pullman, deducted automatically from their weekly paychecks.

But in 1893, the Pullman company was caught in the nationwide economic depression. Orders for railroad sleeping cars declined, and George Pullman was forced to lay off hundreds of employees. Those who remained endured wage cuts, even while rents in Pullman remained consistent. Take-home paychecks plummeted.

And so the employees walked out, demanding lower rents and higher pay.

They went on strike! And others from around the country joined them! This was before Twitter and FacePlace and InstaSnap and all those other things the kids use for sexting today. If people liked something, it meant they did something more than go "click" and then move on to watching another Buffy the Vampire Slayer season on Netflix. [Reminder: Please clicky-click all the buttons to share this post on social media!]

If people wanted change, they had to get off their ass and do something -- and they did. “[R]ailroad workers across the nation boycotted trains carrying Pullman cars. Rioting, pillaging, and burning of railroad cars soon ensued; mobs of non-union workers joined in.”

So poors and uncouth and thuggery thugs were all We Are The 99%! and No Justice, No Peace! and Seriously We Can't Even Eat Gruel On These Wages! and making a general ruckus. How did the rich and powerful react? Big Business, as per usual, took the role of the villain. They convinced President Grover Cleveland to declare the strike illegal, which he did because it was a Tuesday and things were slow at the White House and what could possibly go wrong?

[Cleveland] deployed 12,000 troops to break the strike. Violence erupted, and two men were killed when U.S. deputy marshals fired on protesters in Kensington, near Chicago, but the strike was doomed.

Shining beacon on a hill, right? This is probably the kind shameful shit that will now get whitewashed from AP U.S. History.

Knowing that killing workers was a PR nightmare, folks in DC figured that they needed to do something -- anything -- to try to mitigate the situation. How does one appease the masses? How about labor laws to protect people? Hahahahaha, no. That would be decades away.

New York and several other states had been celebrating organized labor with Labor Day parades for about a decade. Congress, lacking creativity (a trait they maintain today), reached for the nearest easy solution, unanimously passing legislation declaring the first Monday in September as Labor Day. The day is “dedicated to the social and economic achievements of American workers. It constitutes a yearly national tribute to the contributions workers have made to the strength, prosperity, and well-being of our country,” according to the Department of Labor.

And that, wonkers, is why you are reading this at home in your under-roos and drinking shitty beer instead of toiling away at work.

Labor unions went on to push for all those ridiculous notions that we take for granted today: weekends, 40-hour workweek, lunch breaks, paid vacation, child labor laws, overtime pay, workplace safety laws, rainbows, Thin Mints in your freezer, multiple orgasms, cat videos, Idris Elba, the hot chick you banged in college that one time and didn’t get pregnant even though your condom broke, and the Tooth Fairy.

Unions fucking rock. Lift a glass to them -- they deserve it.