Lady-Douche Professor Is Your New Revolutionary Thoreau, By Being A Dick On An Airplane 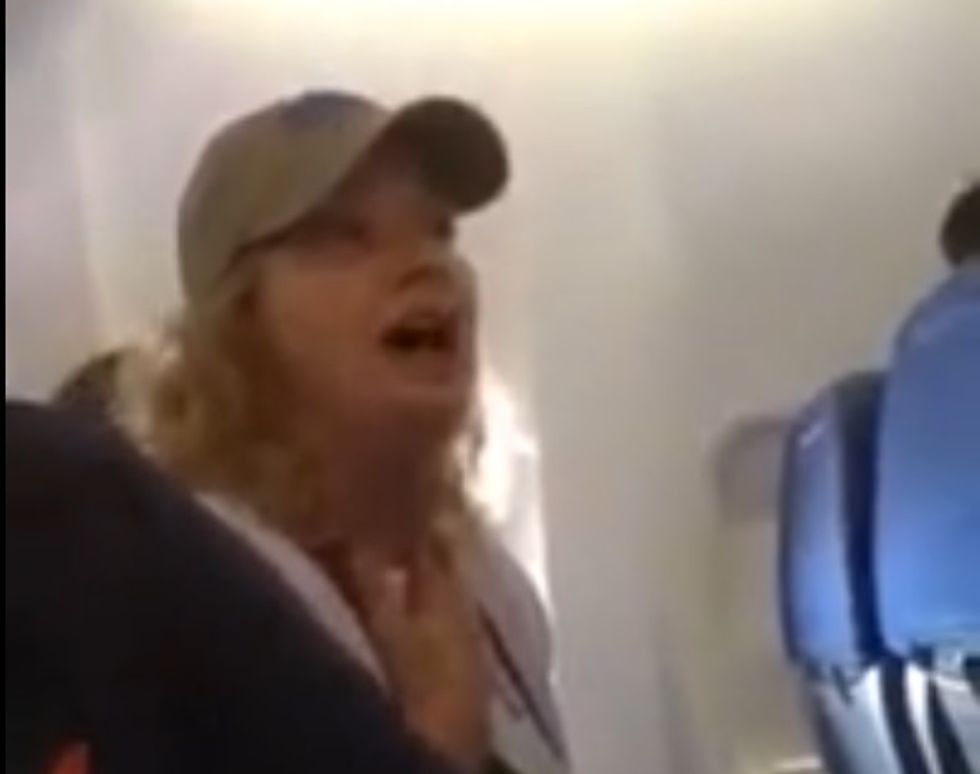 Some people just don't handle the stress of commercial air travel well. If you're an emotionally wrecked drunken racist, you might slap a little baby for crying. If you're an overstressed pilot, you may start ranting about Afghanistan and Israel. If you're a rich televangelist, you might avoid it all by getting your flock to buy you a $65 million Gulfstream G650. And if you're a sociology professor from Penn State,  you just might rant about the U.S. declaring war on Venezuela while you light up a cigarette to show you're into hardcore civil disobedience.

Meet Penn State (Abington campus) associate professor of sociology Karen Halnon, who was on a flight from Nicaragua to Miami when the spirit (possibly distilled ones) moved her to make an inflight political announcement:

“My great hero, Hugo Chavez, nationalized the oil supply so that the people would own the oil,” Halnon continues. “Not Exxon Mobil. Tell Exxon Mobil to go away.”

Halnon was also recorded lighting up a cigarette, taking a few puffs, and then stubbing it out on the tray table in front of her, which was, we must note in her defense, at least stowed in a locked upright position.

After Halnon was arrested on landing, things continued in High Weird Mode; as she was being escorted off the plane by police, she shouted "F*ck you, this is not a democracy!"

Halnon, who has a prior arrest for public drunkenness in 2013, said that she had a wine and juice spritzer on the plane, but did not mention whether it was a single barrel or a full hogshead.

While Penn State officials had no comment on the incident, Halnon herself was happy to give an interview to Philadelphia Magazine, because at this point, why the hell not? She described her rant as "an act of civil disobedience," and then proceeded to play out every possible stereotype about academic leftists. Asked why she felt it necessary to yell about Venezuela on an airplane, she replied,

I'm very knowledgable about that part of the world. I teach about U.S. imperialism in Latin America. And the U.S. has declared war against Venezuela. That means military aggression. They tried to take out Hugo with a coup, and then they took him out with cancer.

She went on to explain that "Fidel agrees with me that the CIA had some involvement in giving [Hugo Chavez] cancer," and that despite the corrupt U.S. government's wishes, president Nicolas Maduro would carry on the Venezuelan revolution, and wouldn't wimp out like the wimpy Castro brothers wimped out in wimpy Cuba. And her rant was a revolutionary act:

The problem is U.S. military global domination. And they want the oil. And they want the water. And so I found that this act was a necessary Thoreau-like act of civil disobedience. I had to speak out now. The situation is dire and urgent, and any sacrifice I make for my own self, if it saves lives -- there have been far too many lives lost due to U.S. global military domination.

Halnon also accused the FBI and TSA of "torturing" her by leaving her in a locked, cold room for several hours and not letting her use the restroom, even though she's had a stomach condition after visiting Cuba several months ago.

That was not very good treatment, and refusing arrestees access to a restroom is a common indignity imposed by dickish police forces, just to be dicks. But we've seen the Senate torture report, and no, this wasn't torture. Highly dickish, but not a violation of the Geneva Convention.

We finally gave up on Halnon when she explained why lighting a cigarette was so key to her protest:

Listen, the point is, I am a sociologist, and I live in an intellectual world. A sociologist always thinks in terms of symbols. And every revolutionary I know smokes. It was identifying with the revolutionary cause. And then, beyond that, it is a symbol that the United States is a smoking gun. The action was necessary. They are going to kill many more people [...]

Which you apparently accomplish by being an asshole on an airplane, in imitation of the time that Archbishop Oscar Romero fashioned a crucifix out of airsickness bags and Skymall catalogues and then smoked it, to call attention to the conditions of the oppressed. A symbol? Look, we happen to have Umberto Eco right here, and he says you know nothing about semiotics.

We aren't really sure here: mental illness? We'd feel pretty bad about mocking that, but she seems lucid enough, though unlike Fox News's Keith Ablow, we are not professional psychiatrists who can diagnose people by watching a video. Honestly, though, this looks to us like either a genuine but seriously fucked up version of activism, or perhaps James O'Keefe's greatest artistic achievement ever.