Laura Ingraham Can Beat Up Your Honor Student 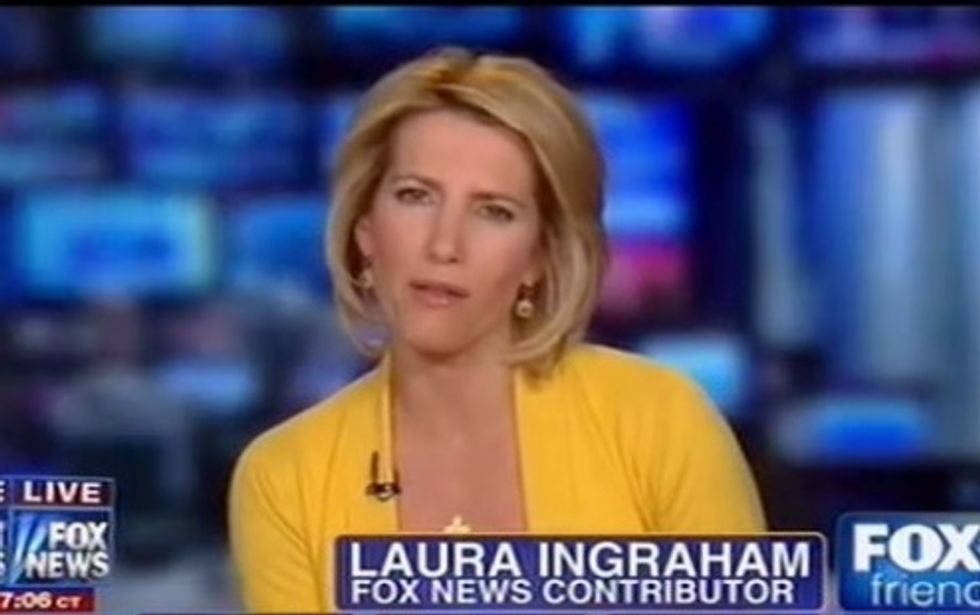 Like millions of other high school seniors, March for Our Lives leader David Hogg has been hearing back from universities he applied to, and TMZ ran an EXCLUSIVE scoop on some disappointing news: Hogg was turned down by the four University of California campuses he applied to -- UCLA, UC Santa Barbara, UC San Diego, and UC Irvine. He got the rejections two weeks ago, and says he's a bit disappointed but he has a lot of other things going on at the moment.

The story got reblogged by Ben Shapiro's Internet Nastygram with the headline "Gun Rights Provocateur David Hogg Rejected By Four Colleges To Which He Applied" and the dismissive lede,

David Hogg, a self-appointed spokesman for a generation, revealed on Tuesday that four universities he has applied to have rejected his application.

Boy oh boy did Fox News homunculus Laura Ingraham have a good schadenfreudey laugh over how stupid that little soy boy is, getting rejected by ALL THE SCHOOLS because he's a loser who can't make the grade:

Incidentally, she knocked one point off Hogg's GPA; both TMZ and the Daily Wire have it as 4.2. As for that "whining," you can see the video: Hogg says being turned down by the four UC schools has "not been too great for me and some of the other members of the movement," like Ryan Deitsch, who was also turned down by UCLA. Hogg also put it in perspective as Just One Of Those Things:

It's been kind of annoying having to deal with that and everything else that's been going on but at this point, you know, we're changing the world. We're too busy. Right now it's hard to focus on that.

So that's "whining," according to Ingraham.

Heavens, if David Hogg were a real America-loving patriot, he'd sue to get his Advanced Placement ass accepted, just like that mediocre white girl from Texas, because obviously he's being discriminated against by affirmative action or something. Then Laura Ingraham might respect him, just like Fox News had conniptions about those terrible freedom-hating teens in Washington, but went out of its way to explain that the Nazis who marched in Charlottesville had legitimate grievances.

Or maybe Ingraham was offended by Hogg's empathy for other kids who don't get into good schools -- and for those who do, but are saddled with debt. Just see him whining about how hard other people have it, like some kind of unselfish person who thinks other people have feelings too:

I am not surprised at all in all honesty. I think there's a lot of amazing people that don't get to college, not only that do things like I do but because their voices just aren't heard in the tsunami of people that apply every year to colleges in such an economic impacted school system here which we have here in America where people have to go into massive amounts of debt just to go to college and get an education

See? He's just not happy with anything. Except for being accepted at Florida Atlantic University, Cal State San Marcos, and Cal Poly, which as safety schools aren't exactly the University of Southern North Dakota at Hoople.

Cernovich later made clear he wasn't suggesting there's anything necessarily wrong with mocking the teens of Parkland, who are, like the entire Left, trying to take away your guns. No, he's just saying it's bad strategy. In fact, he thinks David Hogg and the other teens are assholes who will drive Real Americans to the polls to save their guns, so there's simply no need to say anything that might make the kids seem sympathetic:

A regular beacon of decency and light, that guy is. Also, there's this potential headline Evan popped up in the Wonkette Sekrit ChatCave yesterday: "Mike Cernovich Knows What's A Good Look, Because His Eyes Are Too Close Together And That Helps Him See What A Good Look Is We Guess."

It was so mean, we thought for a moment Five Dollar Feminist had typed it! But at least with Cernovich, we can be certain we're not going after an honor student.

Especially not an honors student who knows how to activism as well as this wonderful kid:

Yr Wonkette is supported by reader donations. Please click here to donate and support us, readers! It's the end of the month and you're a tiny bit shy!