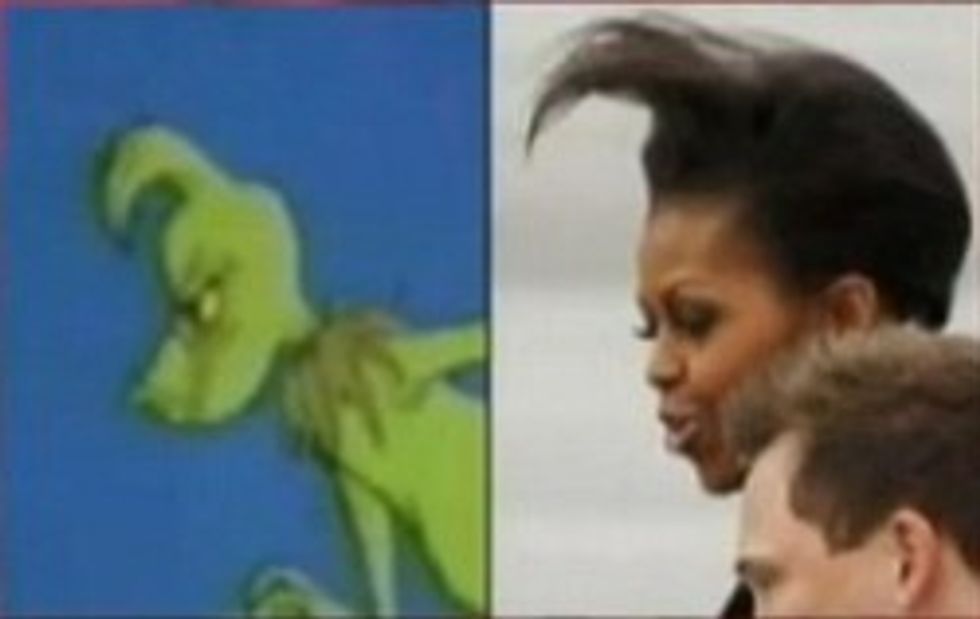 Kansas House Speaker Mike O'Neal took his time quasipologizing for it, but the Republican has finally admitted wrongdoing in forwarding a warm holiday message comparing Michelle Obama to the Grinch by making use of some unfortunate Wind Event that befell Michelle's hair on some tarmac somewhere. O'Neal apparently "didn't read" (because he can't?) the text of the message, which called the First Lady "Mrs. YoMama."

The e-mail, whose subject read, "Twins separated at birth?" contains the above picture and the message, "I'm sure you'll join me in wishing Mrs. YoMama a wonderful, long Hawaii Christmas vacation — at our expense, of course."

O'Neal added, "Sorry, just had to forward this latest holiday message! I've had worse hair days but this is pretty funny." How considerate.

Political cartoons are a part of American culture.

It's hard to see how Mike O'Neal poking fun at himself and forwarding a lighthearted political cartoon about the first lady's extravagant spending of taxpayer funds during a time when many Americans are financially struggling is newsworthy.

This is the first time ... in a few days that O'Neal has forwarded such an e-mail. According to the Lawrence Journal-World, the paper received another e-mail that O'Neal had "endorsed" that featured a picture of President Obama and a passage from the Bible containing the words, "Let his days be few and brief.” Days in office! Days in office. [Lawrence Journal-World via Politico]