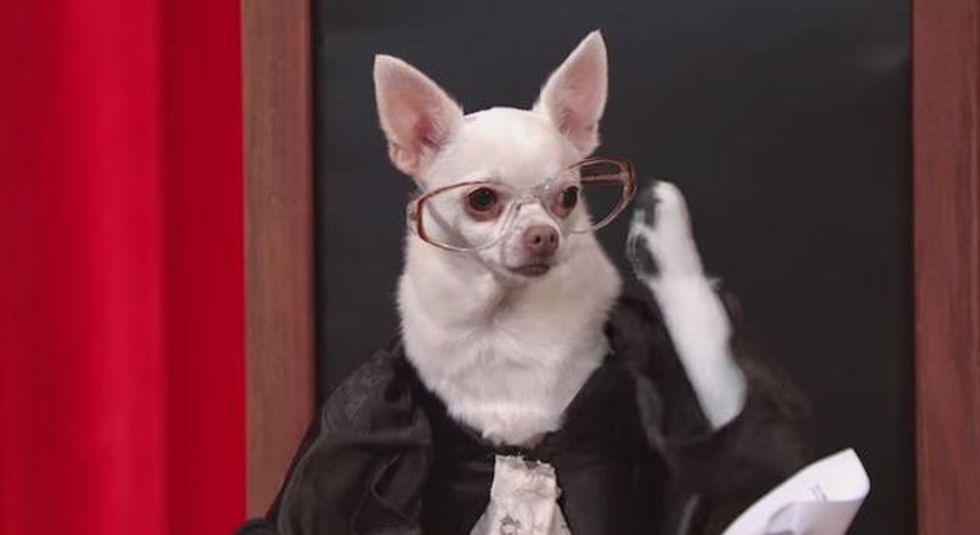 John Oliver was years ahead of the Federalists

You might recall how, a little over a week ago, John McCain took the very principled stand of announcing in advance that not only would he not allow Barack Obama's radically centrist Supreme Court nominee Merrick Garland to ever get a confirmation vote, but he would also automatically reject anyone Hillary Clinton might appoint, too. This only stood to reason, McCain explained, since she'd probably pick wild-eyed extremists like Ruth Bader Ginsburg or maybe the reanimated corpse of Saul Alinsky himself. McCain later walked back those comments through a spokesperson's statement, "clarifying" that of course he would "thoroughly examine" any nominee's qualifications before making a decision (to poop on them).

Well, that set Ilya Shapiro at rightwing/libertarian organ The Federalist to thinking about the Constitution and unacceptable judicial nominees, and he's noticed that while Americans might say in polls they want the Senate to vote on Garland's nomination, the issue doesn't appear to be affecting any actual Senate races, and besides, the Senate's only Constitutional mandate is to provide “advice and consent” on judicial nominees. If the Senate's advice is "take your nominees and stuff 'em," then they've fulfilled their duty. But what if the Rs took their principled opposition to government actually working a step further? Shapiro says go for it; that's totally an option the Founders had in mind. In fact, it wouldn't even hurt politically!

During the battle over the current vacancy, some senators have said they’ve fulfilled their duty by giving President Obama the advice that they simply won’t confirm anyone. (Also, why hold farcical hearings that would be even more Kabuki theatre than what we’ve come to expect?) The voters seem to have evaluated this position and found it acceptable, although of course the GOP may lose its Senate majority for other reasons.

Why yes, Republicans may lose the Senate, but voters have "found [judicial obstruction] acceptable" -- no link or evidence required, as there isn't any in this universe -- and if the R's do lose, it will be for "other" and unstated "reasons."

Similarly, if a majority of senators refused to confirm anyone to any offices, or pass any legislation whatsoever, that’s their prerogative. As a matter of constitutional law, the Senate is fully within its powers to let the Supreme Court die out, literally. I’m not sure such a position is politically tenable -- barring some extraordinary circumstance like overwhelming public opinion against the legitimacy of the sitting president — but it’s definitely constitutional.

And by golly, when he looks at what terrible Hillary Clinton has said about her standards for judicial nominees, he thinks not confirming anyone at all would be a pretty good alternative:

Indeed, Hillary Clinton herself said at the last presidential debate that the Supreme Court is meant to answer questions like “What kind of country are we going to be? What kind of opportunities will we provide for our citizens?” Well, gee, if those are the questions you ask, of course you’ll end up with super-legislators, presumably in ideological agreement with the president appointing them. If you want the judiciary determining public policy, of course you’d think that Supreme Court justices should “represent all of us.”

But that goes against the rule of law and the idea of a judge as neutral arbiter, doing his or her best to apply the law to the facts at issue. As Supreme Court Chief Justice John Roberts explained at his confirmation hearings, the little guy should win when the law favors him, and the big corporation should win when the law goes that way.

Needless to say, it is purely coincidental that recent Republican nominees -- with the exception of that turncoat David Souter -- have all simply followed the law neutrally in a way that advances mostly right-leaning goals. They're merely following the law as it is written, is all, neutrally allowing unlimited corporate money to flood into elections, fair-mindedly undoing the Voting Rights Act, and non-ideologically strangling consumer protection laws. So if Hillary Clinton insists on appointing "black-robed community organizers," says Shapiro, then if the Republicans hold the Senate, "it would be completely decent, honorable, and in keeping with the Senate’s constitutional duty to vote against essentially every judicial nominee she names."

Here's hoping they don't get the chance to give his advice a try. Which reminds us, we need to get out and do our early voting thing. You might want to look into that your own nasty selves, too.