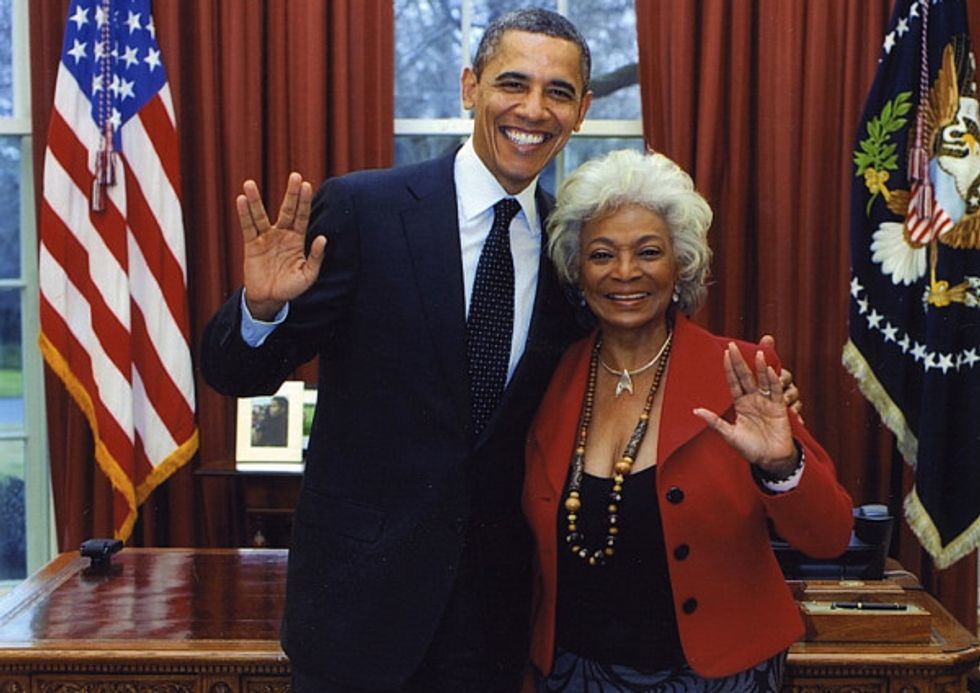 Leonard Nimoy died today at the age of 83. I was one of those kids who were just a little too young to watch Star Trek during its prime-time run, but the afternoon reruns in the '70s were my introduction to science fiction (and you could still buy those nifty "phaser" disc shooter guns, too, even though they looked like nothing from the show). And the animated series came along just before I aged out of Saturday morning cartoons. In high school, Trek was a nerd bonding ritual, at least until Dungeons and Dragons came along. And of course, there's still the adult fun of enjoying every campy moment of Shatner's scenery-chewing and the studio's time-travel excuses to dig out props and scenery so the Enterprise crew could play at being gangsters or Nazis or cowboys.

A confession: when I was a kid, Dr. McCoy was always my favorite of the Enterprise crew (it helped that DeForest Kelley spelled his name the right way, with two e's, like I do), but half of what made McCoy so much fun was his verbal combat with Spock, the unflappable, logical Vulcan. It was OK with me that Spock usually got the better, more cutting comeback, because there was no denying that Spock was cool. Nimoy got more mileage out of a raised eyebrow than Shatner did out of a passionate, pause-filled speech.

Nimoy's own ambivalence about the role was, to put it plainly, fascinating. I remember reading his first autobiography, I Am Not Spock in high school (although I remember practically nothing about it), and a little later, discovering just how terrible Nimoy's poetry was. It wasn't until ages later, once the Internet was starting to make us think that the Enterprise's computer was just barely possible -- though the web was nowhere as good at getting the answer you wanted -- that I stumbled across the glorious weirdness of Nimoy's trippy 1968 "Ballad of Bilbo Baggins." We're guessing a really bad flagon of Saurian brandy was involved in that:

And that was the lovely thing about Leonard Nimoy -- you just knew that he was having a hell of a good time, even with the crappy poetry, even with the "In Search Of..." baloney. Did he actually believe he was bringing us evidence of Bigfoot riding on a UFO in the Bermuda Triangle? He sure acted like he was serious about it, and that was fine. By the time of his second memoir, I Am Spock, he was entirely comfortable with being a pop-culture icon, goofiness included, and it made the Star Trek movies all the more fun (insert here all the fanboy arguments about how the movies betrayed Spock by making the character far too accepting of his human emotions, something no self-respecting Vulcan would ever do).

We just heard George Takei remembering his friend and colleague on CNN, telling a story about how when NBC was making the animated series, they originally had only hired Shatner, Nimoy, James Doohan, DeForrest Kelley, and Majel Barrett to do the voice acting. Nimoy protested, insisting that if they didn't also offer roles to Takei, Nichelle Nichols, and Walter Koenig, he wouldn't go along, because Star Trek was about diversity, and how could you have that without the full bridge crew?

Walter Koenig remembered a similar incident during the making of the original series in a 2014 interview with the Las Vegas Sun. Asked how he got along with the rest of the cast these days, Koenig replied,

Leonard (Nimoy, Mr. Spock) was always kind of unapproachable. But a very good man. Sound ethics and a good sense of morality.

When it came to the attention of the cast that there was a disparity in pay in that George and I were getting the same pay but Nichelle was not getting as much, I took it to Leonard and he took it to the front office and they corrected that.

He was sort of the captain, then?

On that issue, he was. You could count on Leonard for that kind of thing.

A mensch, then. So farewell, Mr. Nimoy. You inspired people to become scientists, astronauts, actors, and writers, and for a lot of kids, Spock was probably the first person who ever advocated the virtues of logic. We can hardly wait for some Creationist to blame you and Gene Rodenberry for Star Trek's contribution to spreading the evils of secularism and humanism -- at least this time, they'll be right.

The Star Trek screenwriters knew that it was always a good idea to give Spock the last line in any episode, so we'll close with Leonard Nimoy's final tweet, from Monday:

Update: An official statement from the Nerd In Chief: