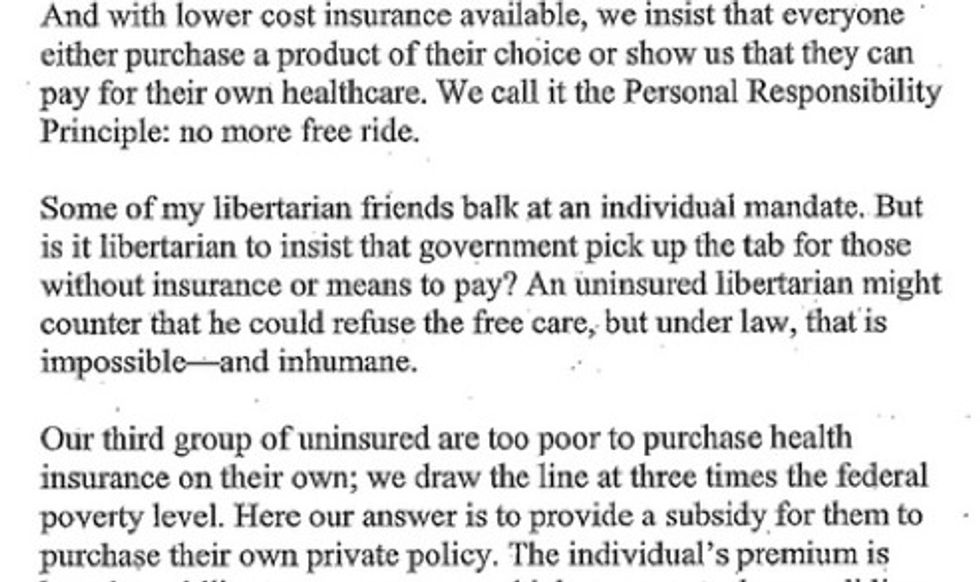 We all vaguely know that Mitt Romney was at one time one of those Marxist militants who sought to force healthcare coverage on human individuals with a government requirement that most individuals buy private health insurance available through a competitive marketplace, i.e. COMMUNISM, and that this long-ago love affair with tyranny is something that Mitt Romney's team spent $100,000 to hide when he left office as Massachusetts governor. But true love cannot be kept hidden forever blah blah blah and now the Wall Street Journal has published a lengthy series of fugitive emails that managed to escape his team's delete key, and they are just one long testament to Mitt Romney's devout affection for the individual mandate. Let's have a peek!

Most of them are too lengthy to block quote so here is the first short one we saw. This is Mitt Romney, who is staying in, not having any fun, because he is lovesick, for individual mandates:

So, I stayed home to write an op ed. No New Hampshire, Lousy weather anyway. Take a look at what I've drafted. I'm not sure it's cerebral enough for the WSJ. Maybe somewhere. Maybe a re-work. Of course, as always, praise is welcome. Best, Mitt

That's cute, "praise is welcome." Look who has feelings to hurt now all of a sudden! He is so in love with the individual mandate. Here is the first draft to come out of that lonely weekend, where he even tries his hand at some emotion with a fancy word like "inhumane" used in a negative context, like it is somehow unacceptable when people suffer from lack of healthcare. Liberal pansy-ass!

Totally smitten. And guess what other terrible liberal crimes against humanity Mitt Romney used to love to commit! Here is a fun thing we spotted in the Boston Globe:

A Lowell-based solar technology company that received $1.5 million in state loans when Mitt Romney was governor has filed for bankruptcy, opening the presumptive Republican presidential nominee to charges of hypocrisy.

Konarka Technologies disclosed Friday that it had filed for Chapter 7 bankruptcy protection and would fire its 80-member staff and liquidate its assets.

On the other side of the equation, maybe this is why Mitt Romney has mysteriously been going around trying to take credit for Barack Obama's successes. He has understandable difficulty telling Obama's record apart from his own. [WSJ]