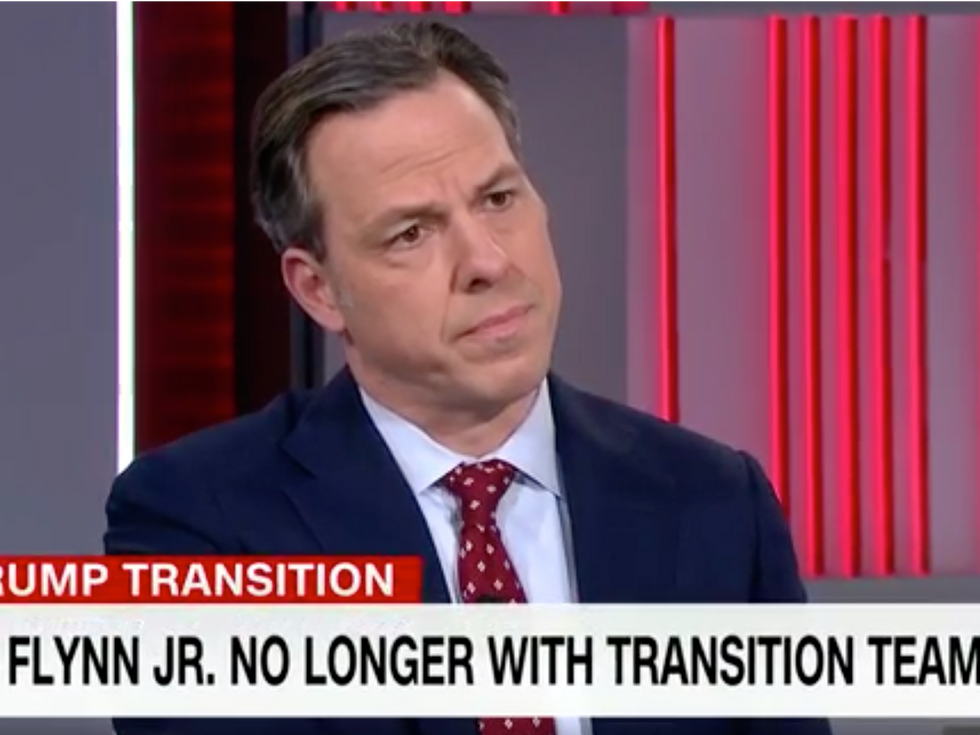 Did you like that casual racism in the headline? It is there in honor of Mike Flynn, father of Mike Flynn, who has just been fired from Trump's transition team, for sharing too many internet stories about Hillary Clinton's #pizzagate child sex ring. Mike Flynn loves casual racism! But usually he is not like "OH JEWISH GRANDMAS, THEY ARE ALWAYS TRYING TO PUT FOOD IN YOU." He is usually more like "Muslims, we should kill them" and "Jews can fuck right off on out of here, but without the F-word because that would be wrong."

Apparently he used to be a sane person. Maybe he has brain cancer or something! I bet Mike Huckabee has a cure for that.

We are here now, today, to point you to this fun-times jamboree on the CNN yesterday, where Jake Tapper tried to get Vice President-elect Mike Pence to not lie for even one second. It was heroic! It was like a schnauzer on your pant leg! It was unsuccessful!

And here is some transcript, which we stole from Business Insider!

Pence insisted that Flynn's son was helping "a bit" with "scheduling and administrative items" but "that's no longer the case."

"Look, all — all of our families want to be helpful," Pence said, per a transcript. "And four weeks to the day from Election Day there's been an awful lot of work to do. But — but — but Mike Flynn Jr. is no longer associated with Gen. Flynn's efforts or with the transition team."

"You — you're downplaying his role, but you must be aware that the transition team put in for a security clearance for Michael G. Flynn, the son of Lt. Gen. Flynn," Tapper responded.

"No, but you put in for a security clearance for him," he said.

"He's helping his dad arrange for meetings and provide meetings," Pence retorted. "But that's no longer the case."

Tapper fired back, asking if you need a security clearance to "do scheduling?"

"I think that's the appropriate decision for us to move forward, avoid any further distraction," Pence replied, then reiterating his confidence in Trump.

"I want to move on to other issues, but I'm afraid I just didn't get an answer, which is were you aware that the transition had put in for a security clearance for Michael Flynn Jr.?" Tapper persisted.

"You know, I've worked very closely with Gen. Flynn," Pence said. "We've met on many occasions. I've — I've never — I've never seen his son present for any of those meetings."

"But you're head of the transition team so you know who you put in security clearances for," Tapper pressed on.

"Well — well, Gen. — Gen. Flynn did inform me that his son was helping on administrative matters," the Indiana Republican said. "But — but, Jake, this is all the kind of distraction that — that, frankly, I know, with all due respect, the national media likes to go chasing after."

Tapper pushed forward with the line of questioning an additional time.

"Well, what I can tell you is that in — in talking with Gen. Flynn today, he made me aware that his son was assisting him in scheduling ..." Pence answered.

"And then you put in for a security clearance," Tapper interjected.

Pence then launched into an extended answer:

" ... meetings and well whatever the appropriate paperwork was to assist him in that regard. Jake, I'm sure ... was taking place. But that's no longer the case. And your viewers and the American people can be confident that we're going to — we're going to continue to drive forward.

"Look, this is a very challenging time for America's place in the world. It was a week ago yesterday that we saw a terrorist-inspired attack on the Ohio State campus. We're bringing together with — with Gen. Flynn, with KT McFarland, with a team that's going to surround them and advise this president, people that are going to, going to set into motion. I'm confident, [in] the policies that will — that will make America safe again at home and abroad."

"And it was just two days ago that we saw somebody with a gun go to Comet Pizza because of this crazy conspiracy theory that Michael G. Flynn had been putting out there, defended afterwards, and you guys put in for a security clearance," Tapper responded.

That'll do, Jake Tapper. That'll do.

Your editrix (ME!) never understood the Tapper Hate she saw burbling up from lib friends on Twitter. She (I!) saw Tapper give a keynote to the Association of Alternative Newsweeklies in New Orleans in 2012 and he was funny and smart! And he had been a senior writer for Washington City Paper back in 1998 when she (oh, fuck it, I) was a young and sexy senior editor at OC Weekly, and now I am the owner and publisher and editrix of Wonkette, and he is an anchor for the CNN News, so we are BASICALLY the SAME, even though he said "if you come to Washington I will put you on the teevee" and then I went to New Hampshire when he was there and NOBODY WENT ON THE TEEVEE EXCEPT THE WONKETTE BABY.

Has the Wonkette baby been in "journalism" since NINETEEN NINETY GODDAMN ONE?