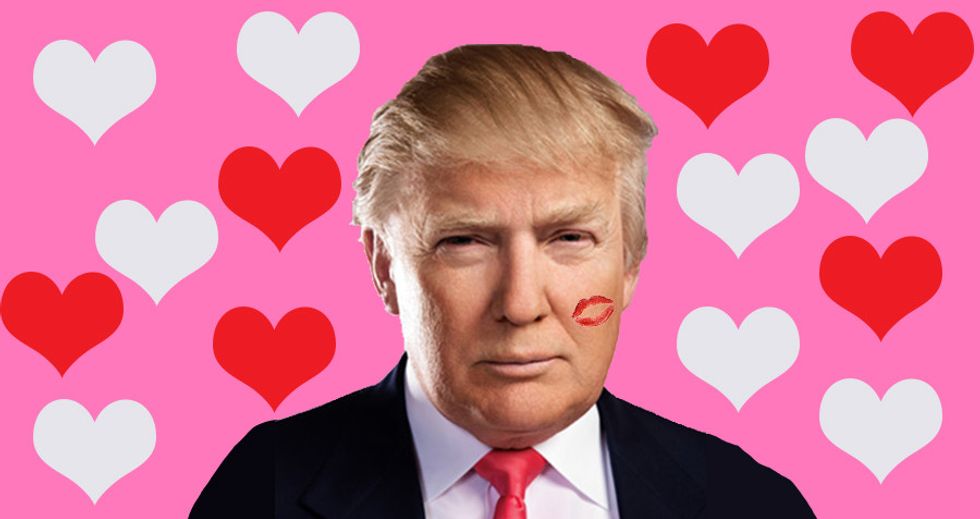 MOST BEAUTIFUL TV NETWORK EVER

We all know the media is very mean to Donald Trump. Reporters ask him questions he doesn't like, and he has to revoke their press credentials as a punishment. Even Fox News has been unkind at times, which led Trump to teach the network a lesson by pulling out of one of its Republican primary debates. Of course, after a while, Megyn Kelly and Trump kissed, made up, and scrubbed each other's backs in the bathtub, and everything is blow jobs and candy canes now.

But Donald "Might Even Lose Utah LOL" Trump, who is never going to be president (and might not even want to, really), may have his sights set on starting his own TV network! A media outlet where he doesn't have to learn things (presidenting would be hard!), and could just focus on what is important, which is licking himself on the ass in public. Tell us the news, Vanity Fair!

Trump is ... considering creating his own media business, built on the audience that has supported him thus far in his bid to become the next president of the United States. According to several people briefed on the discussions, the presumptive Republican nominee is examining the opportunity presented by the “audience” currently supporting him. He has also discussed the possibility of launching a “mini-media conglomerate” outside of his existing TV-production business, Trump Productions LLC. He has, according to one of these people, enlisted the consultation of his daughter Ivanka Trump and son-in-law, Jared Kushner, who owns the The New York Observer. Trump’s rationale, according to this person, is that, “win or lose, we are onto something here. We’ve triggered a base of the population that hasn’t had a voice in a long time.”

Hooray! Trump's spokesdick Hope Hicks said NUH UH we are not doing that, we are Making America Great Again. Poor thing probably has no idea her boss's campaign might be a ruse.

[wonkbar]<a href="http://wonkette.com/602407/it-seems-like-donald-trump-might-not-be-that-good-at-business-but-that-cant-be-right"></a>[/wonkbar]Here is a #funny about this. According to Vanity Fair, someone close to the alleged discussions about Trump TV Funtimes Network says Trump is pissed that he doesn't make any dollars for himself when he is on TV running for president (imagine that!), and that this "brings him to the conclusion that he has the business acumen and the ratings for his own network.” HAHAHAHA HOLD ON WE ARE LAUGHING A LOT, because remember that thing about how Trump is actually a really shitty businessman, the same way he's actually shitty at everything? Yeah that. So the network will obviously fail.

Also too, Vanity Fair quotes an anonymous "entertainment executive" who pretty much pisses all over the Corn Flakes of Trump's idea:

[O]ne rival entertainment executive pointed out to me that launching a cable channel is “nuts” because of the limited spectrum available, the declining advertising rates, and the immense start-up costs and resources required. “It’s a fool’s errand,” this person said. “But then again, we are talking about Donald Trump.”

Yup, and Donald Trump is a moron. But maybe, before it fails hilariously and royally, he can have a network for a little bit and it can have some shows and stuff!

Those are all fabulous ideas, and Trump is free to use them as long as he agrees to pay Wonkette cash money, UP FRONT.