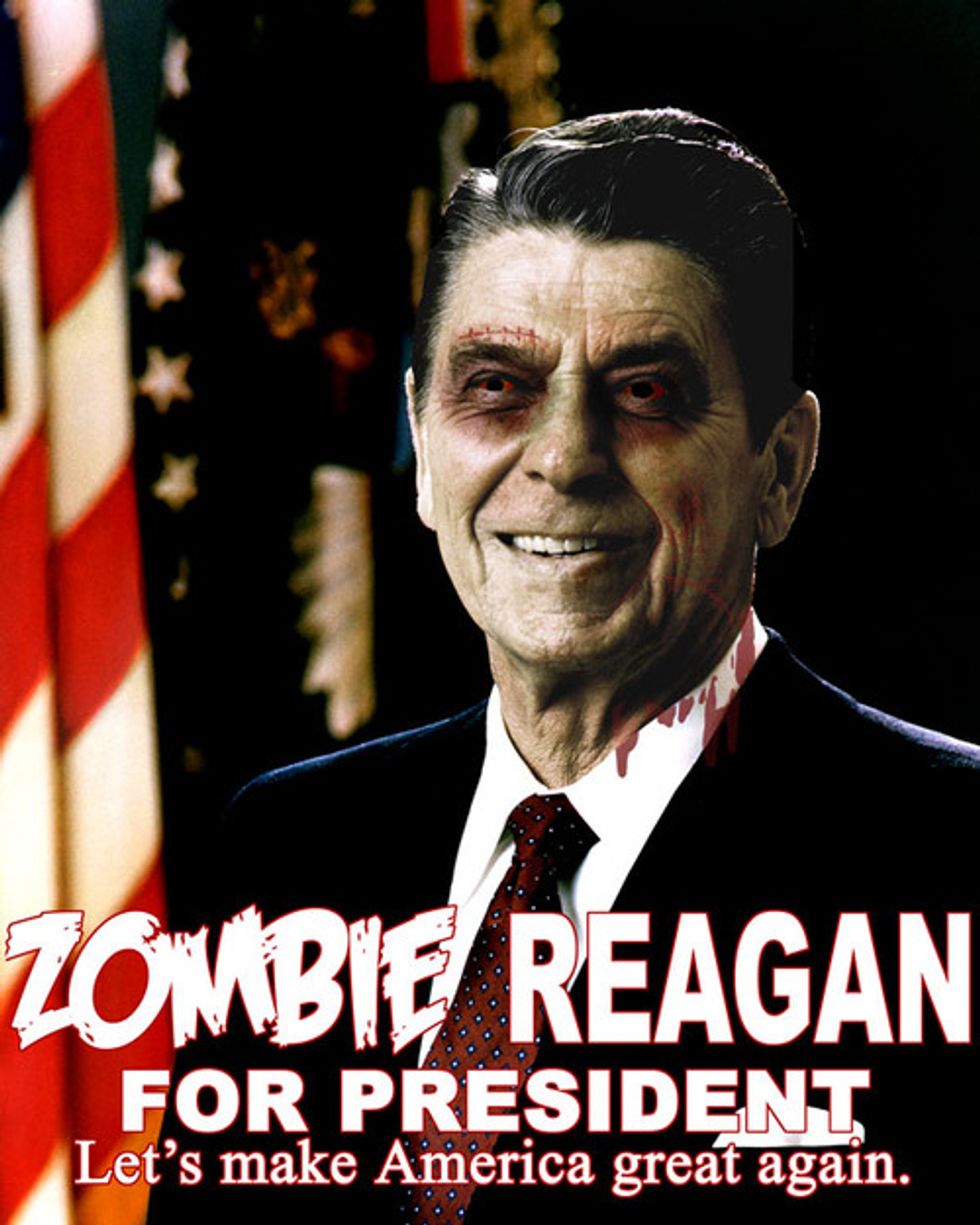 It's time again! It's been over a month since the last time the Republican candidates met up to cry in unison about how they're all losing to Donald Trump, because they all suck. Donald Trump sucks too, but he's the only candidate who seems have the pompous, consistent joie de idiot to keep the attention of stupid Republican primary voters.

You have questions, we have answers.

What's this about making mouth-sex to Ronald Reagan's ghost?

Oh, the debate is at the Reagan library, that's all. Candidates are free to decide exactly what kind of sex they want to make to Reagan's ghost, as long as it is heterosexual sex.

Which assholes get to be on the real debate again?

All the same ones as last time, and introducing Carly Fiorina, as "Endora," because she got lady affirmative-actioned into the debate, for feminism reasons. Here are their names, in case they are all new to you. We have helpfully also included a Wonkette link of the last time we called each of them A Idiot. This will hopefully just give you, Gentle Reader, a quick snapshot of where each candidate is at, heading into the debate:

There you have it. Eleven people who suck. Together at last.

And which losers are losering it up at the kids' table this time?

Rick Santorum, Bobby Jindal, Lindsey Graham and George Pataki. Jim Gilmore (Who?) is not really running, so therefore, he was not really invited. Rick Perry would have been there, but he had a prior commitment to lose the primary entirely. Don't be sad. His campaign is living on a farm right now, running, jumping, barking and shitting with all the other puppies. He's in a happier place. Shhhh.

Why aren't you posting recent Wonkette stories about the loser kids' table people?

Uh, yeah. Scott Walker is required to try to refrain from doing this:

You're such a gas, Wonkette!

But for real, are there rules?

Yeah, CNN released a helpful video. It says no cussing and all the candidates get a glass of water. Have fun with that, Marco Rubio, haw haw haw, #thatwaterthingwassodumb. Also it says that if one of the loser lamebrains at the sad kids' table debate says something "particularly sharp or interesting" (stupid, they mean if one of them says something REAL stupid), they might show it to the big kids during the big debate so everybody can laugh at it on the big screen.

When is the debate on?

The fuck with your questions, are you not signed on to AOL right now? Why don't you just open a new tab and go to CNN's website, and maybe they'll tell you the Loser Baby Wah Wah debate is on at 6 PM ET, and the Top Ten Losers, And Also Carly! debate is on at 8 PM ET. Oh look, we just did work for you. AGAIN.

Will there be liveblogging?

The fuck with your questions AGAIN. Of COURSE we are liveblogging. You just show up at the appointed time. We will see you then, and you will laugh, and America will be made new.