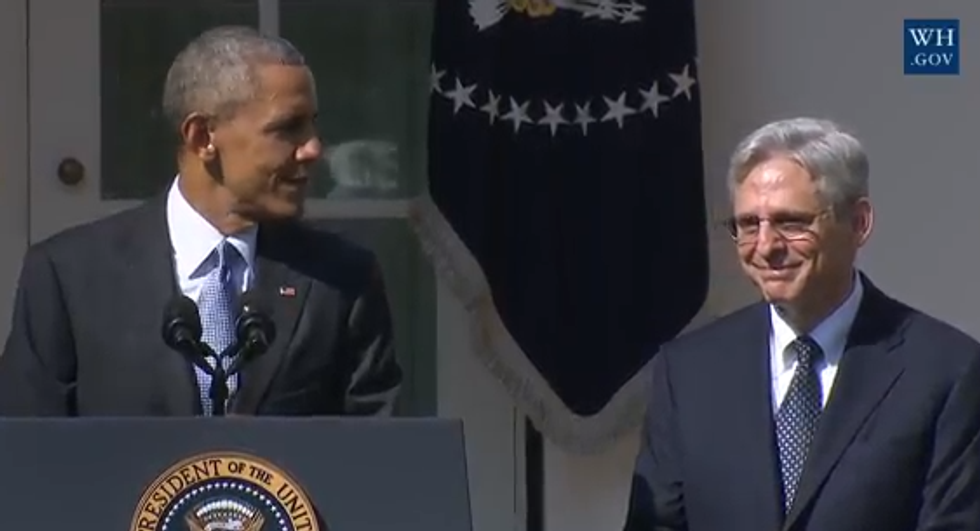 Hooray, the president of America, Barack the Great, has made a nominee to replace Dead Antonin Scalia's rotting flesh 'n' bones on the Supreme Court! Don't you want to know everything about him? No? Well SUCKS TO BE YOU because we're gonna learn you anyway.

Guys, this isn't Grindr, don't pull that A/S/L crap with us. But he is 63, which would make him the oldest Oldey McOlderton nominated to the court since 1971. His gender is "boy," and he is a Chicago person, just like Barack Obama. But he's been hanging around DC for a long time, because he works there, just like Barack Obama! He serves as chief judge on the U.S. Court Of Appeals for the District Of Columbia.

So what makes him some big shot who's more qualified to be on the Supreme Court than Gee Dubya Bush appointee Harriet Miers?

Lots of things! Let's let the Gray Lady tell us about him:

Because of his position, disposition and bipartisan popularity, Judge Garland has been on Mr. Obama’s shortlist of potential nominees for years. In 2010, when Mr. Obama interviewed him for the slot that he instead gave to Justice Elena Kagan, Senator Orrin G. Hatch, Republican of Utah, said publicly that he had urged Mr. Obama to nominate Judge Garland as “a consensus nominee” who would win Senate confirmation.

“I know Merrick Garland very well,” Mr. Hatch said at the time. “He would be very well supported by all sides.”

Oh, and here is a lovely graphic, also shared by the New York Times, that shows Garland has more experience as a federal judge than any current SCOTUS justice:

Obama said Wednesday that "the one name that has come up repeatedly from Republicans and Democrats alike" for the Supreme Court is Ol' Merrick. Also too:

[He is] widely recognized not only as one of America’s sharpest legal minds, but someone who brings to his work a spirit of decency, modesty, integrity, even-handedness and excellence. These qualities and his long commitment to public service have earned him the respect and admiration from leaders from both sides of the aisle.

If you want more "facts" about Garland's "qualifications," click this linky and see what the White House has to say about him.

Gosh, Sen. Orrin Hatch is on record saying what a mensch this dude is? Is Barry The Bamz just trolling Republicans with this nomination?

Well, we don't think he's JUST trolling. Barack Obama is a professional, after all. We think we can safely assume Obama actually wants Garland to be on the court and isn't playing some sort of long game where his REAL pick is Saul Alinsky 69-ing William Ayers For All Eternity. But he's definitely also trolling Hatch, who told the wingnuts at Newsmax LAST WEEK that Obama "could easily name Merrick Garland, who is a fine man" for the court.

In Obama's announcement Wednesday morning, he decided to have some more giggles at Hatch's expense:

Merrick was nominated to what’s often called the second-highest court in the land, the DC circuit court, During that confirmation process he earned bipartisan praise from Senators and legal experts alike. Republican Sen. Orrin Hatch, who was then chairman of the Senate Judiciary Committee, supported his nomination. Back then, he said, ‘In all honesty, I would like to see one person come to this floor and say one reason why Merrick Garland does not deserve this position.’ He actually accused fellow Senate Republicans trying to obstruct Merrick’s confirmation of playing politics with judges and has since said that Judge Garland would be a consensus nominee for the Supreme Court. He would be very well supported by all sides, and there would be no question that Merrick would be confirmed with bipartisan support.

Hahahahaha, Orrin Hatch, how would you like to eat some of YOUR OWN WORDS with your Lunchables today? Of course, Sen. Hatch is a Republican, which means he's a craven, goalpost-moving cockweasel. So here's what he had to say on Tweeter about the unmitigated gall of the president of the United States nominating a Supreme Court justice:

The American people HAVE a voice. That's why they/we chose Barack Hussein "Suck It, Fools" Obama to be president until January of 2017, you sniveling fuckstumps. They will continue to have a voice after that date, when Hillary Clinton will be responsible for making Supreme Court nominations.

Are more Republicans already complaining? Haha OF COURSE THEY ARE. Yr Wonkette will be sure to gather them all up into one big sac so we can kick them all in the nuts together!

Give us more trivia, as we are #nerds who like trivia.

If confirmed, he would be the SIXTH Harvard Law person on the court, and the FOURTH Jewish.

What's a good way to say his name if you're saying jokes?

Which Wonkette editor called him a "silver fox" in our live-bloggity post of the president's announcement?

Getting this guy confirmed is going to be a complete shitshow, isn't it?

Oh god, we hate ourselves already.

But for now, congratulations, Garlick Hammond or whatever your real name is! We are crossing our fingers and all our other cross-able appendages for you, and we are very sorry about all the un-American bullshit the GOP is about to throw at you.