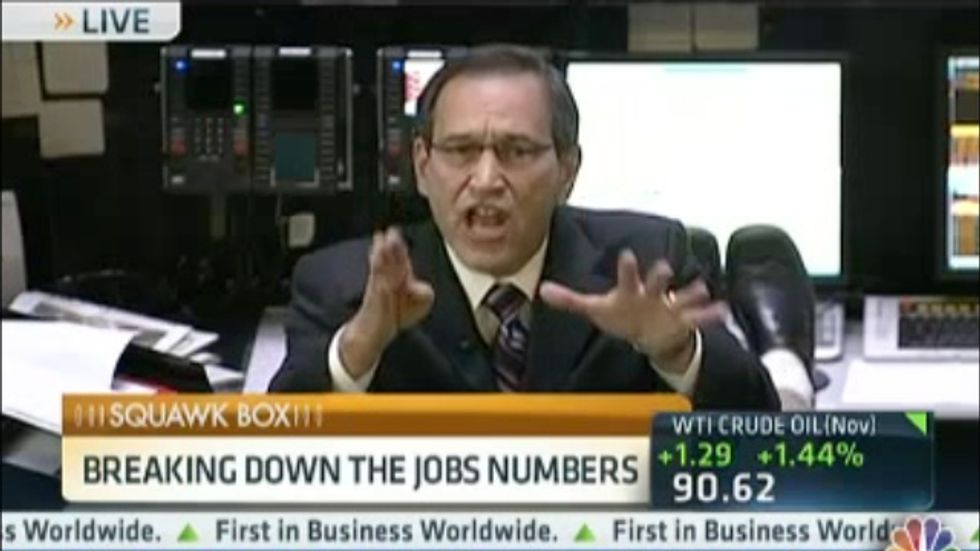 Did you guys watch CNBC's shitty GOP Debate? True to their "First In Business" tagline, those free market champs gouged America with pay access for the privilege of watching a gaggle of hacks complain about any question that wasn't, "Can you tell us your favorite American flag story?"

Anywho, we bet you guys didn't even know that Soulless Market Manipulator and Infomercial Graveyard CNBC is part of the Liberal Media. Surprising but also not surprising, isn't it? Saul Alinsky and Rick Santelli? Same.

All those poor GOP candidates, ready from day one to crush ISIS and make Putin cower with only steely gazes and bombastic rhetoric, had to draw the line somewhere. And that was in front of the backlit shadow cast by the nefarious John Harwood and his "Gotcha Minions" with their questions about actual policy. It seemed like another stupid debate for dummies to Yr Wonkette but social media was full of conservative pundits hollering for them to WALK OFF the stage because that's what leadership is all about. In fairness to these dipshits, answering three questions about your background or campaign platform is way worse than a bullshit congressional hearing and being rudely interrogated by rabid grandstanding teabaggers for eleven hours.

The "Liberal Media." We hear a lot about it. Like, a LOT about it. But on the spectrum of pink to Pepto, what are the six corporate persons who control over 85% of all media really like? Well maybe some recent news can give you some idea.

Breaking: Outside of loons like Hobby Lobby, most Corporate Persons couldn't give two fucks about policy that doesn't affect them. (And of course the cheap bigots behind Hobby Lobby really only give a shit about social issues if it can save them a nickel.)

But what about NBC and parent company Comcast? Aren't they different? After all, they give us awesome Token Maddow. They must be super liberal. Let's follow the money and see who received the most in the 2014 election cycle class? Had to be Baldwin. Maybe Ellison? Ah yeah, probably Obama (3rd Term coming)?

Welp. While donations from Comcast (and the individuals who run it) were basically split down the middle, feeding the gullets of Dems and Repubs alike, John Boehner led the way with $107,775. And as is his cross to bear, he probably shed a solitary tear for every dollar donated.

But of course these companies are agenda driven. They are calculating corporate entities that care only about conquering market share and extracting every dime of ad revenue possible. Maybe that's why most media outlets gave Rep. Boehner (R-Damp Ashtray) the glowing Dead Celebrity treatment when he stepped down from being useless leader of one of the most obstructionist opposition parties in our illustrious history.

Comcast had $69 billion in revenue last year. They donate to everyone with the single-minded hope that that "69 billion" number will increase. There's your Grand Media Agenda, Republicans. Appreciate the ruthless market forces. Glad we got that out of the way.

Come do (unpaid) counter-intelligence for Disney!

This free labor economy is getting ridiculous. According to The Independent, Disney is hiring an intern to provide “timely and relevant intelligence that is critical to supporting and informing corporate executives, key business leaders, and security and safety personnel at all levels of TWDC – worldwide.” Typical Liberal move by a Liberal Media Conglomerate, Disney. Not taking the War On Cartoon Princesses seriously and entrusting it to some fresh faced chap or gal who's only looking for work because of a failed FBI drug test.

One interesting nugget buried in the weird news item is that thanks to a couple sentences a Disney lobbyist dropped in a pre-Iraq War spending bill, Disneyland and Disney World are both strict no fly zones.

Meant to be temporary, the flying ban was never lifted, conveniently also giving Disney a way to stop advertisers from flying banners over its parks.

Be careful out there, Dumbo.

Speaking of Disney, remember a few weeks ago when we discussed Corporate People abusing the H-1B Visa program by using it as an outsourcing workaround whereby skilled American workers are training their foreign replacements? Yeah about that. Disney is ALSO doing it, although think about how much they've given back with the American jobs at the shitty Epcot international restaurants.

Florida Sen. Rubio has consistently supported an increase in H-1B visas and the smug fella was Gotcha! asked about the issue at the debate.

In and of itself, support for the program is totally reasonable and probably a smart political move in the event Rubio gets to the general election (JFC we can't believe we typed those words) and he doesn't have to meet a immigrant bashing quota along the campaign trail. And closing these outsourcing loopholes would be great for a program designed to bring super smart foreign talent over here for the good of us all. But here's the thing. There is a bill percolating in the Senate,  meant to address these abuses, that Rubio's allegedly not co-sponsoring. Furthermore, Rubio failed to help out Sen. Bill Nelson (D-FL), "in asking for an investigation in June of visa workers at Disney Parks and Resort in Orlando."

A follow up question about either of these issues? Our esteemed Liberal Panel dropped the ball on that one. Maybe if the debate was focused on economic issues or something.

Over a month ago, News Corp bought 73% of National Geographic in one of the more depressing recent developments in our era of rapid media consolidation.

For over a century, National Geographic has been there with engaging research, endearing journalism, and pictures (of many species) for kids to tape on their bedroom walls. It's also spent considerable effort detailing the reality of Global Warming. Too bad, so sad, because the nature magazine and associated media outlets are now in the hands of the Corporate Person who turned the Wall Street Journal into the climate change denier of record in about as much time as it takes Rupert Murdoch to finish a drunken rant.

Climate activists are pleading for an independent public editor and all we can say is good luck with that. It's possible that the best candidate we can hope for is Not Brian Kilmeade.

Lawlessness. Confederate Flags. Weird Incestuous Undertones. Treasonous Automobiles. Cooter. Nothing says "America" but also "Confederacy" like the Dukes. So why did Viacom's TV Land cancel reruns this past summer? Well, like many Corporate Persons during this past sad and volatile summer, Viacom didn't believe associating itself with the stupid racist flag was a shrewd business move. Of course complaints poured in because isn't it just like a liberal to unilaterally alter its business model in light of ever-changing public sentiment and possible pressure from advertisers. For shame, guys. The Cooter will rise again.

There's your Liberal Media and the Corporate Persons who shelter them, conservatives. Keep bitching about it some more, you petulant hothouse flowers. Christ.