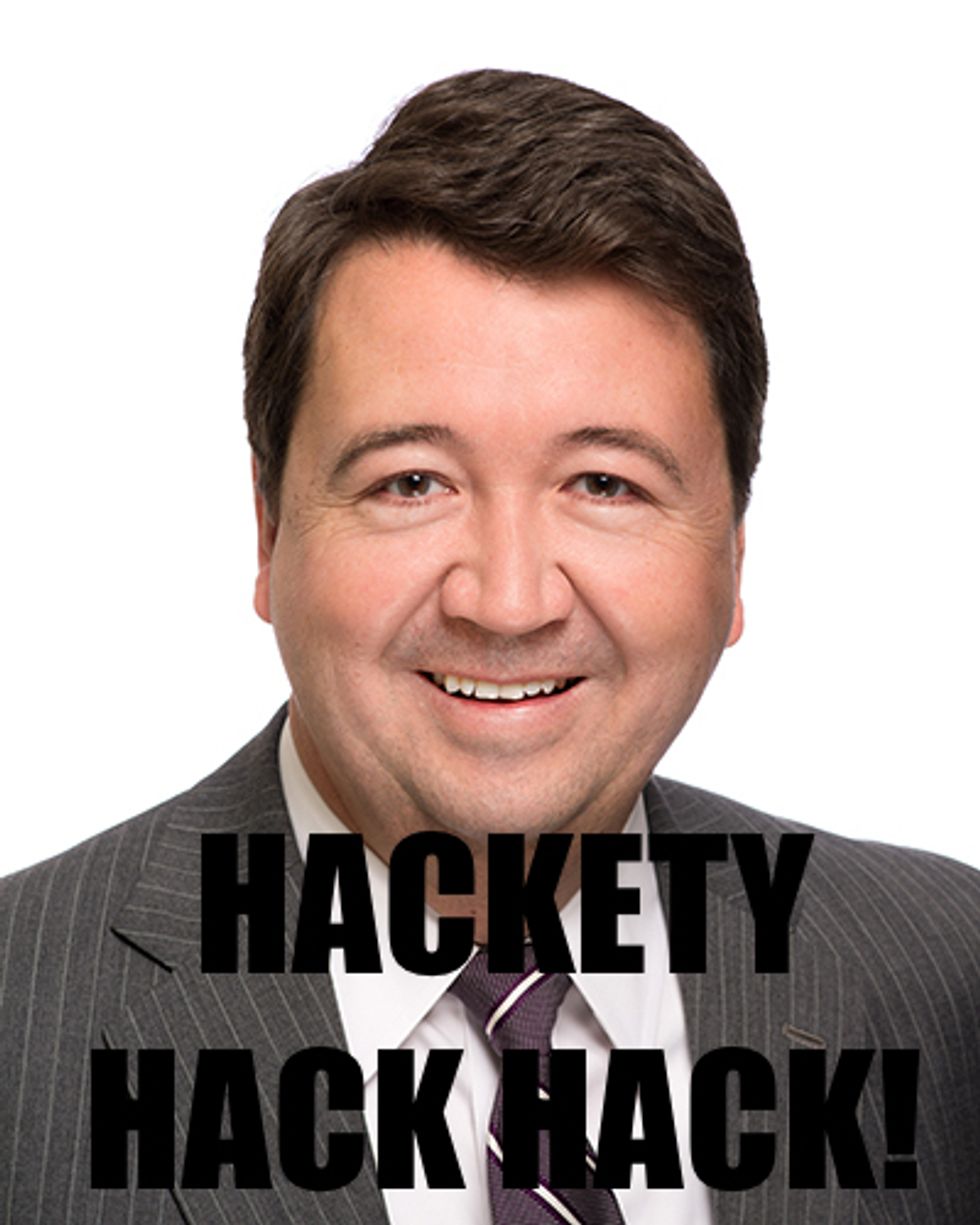 This month, Donald Trump nominated Kentucky attorney John K. Bush to fill a vacancy on the 6th Circuit Court of Appeals. On the one hand, Bush has had a distinguished legal career in private practice with substantial experience litigating in the federal system. On the other hand, HE'S A TOTAL FUCKING LOON.

We don't blame Bush for his wife Bridget's batshit crazy blog Elephants in the Bluegrass. Yes, a woman who graduated from Harvard law actually typed this sentence on Monday: "That means Paul -- a sitting U.S. Senator -- was spyed [sic] upon by the executive branch probably by the NSA." But whatever. The issue is that John Bush also typed a whole bunch of crazy sentences of his own under the pseudonym "G. Morris."

Think Progress has a derp roundup of the nominee's ramblings.

The two greatest tragedies in our country -- slavery and abortion -- relied on similar reasoning and activist justices at the U.S. Supreme Court, first in the Dred Scott decision, and later in Roe.

Despite Martin Luther King's avowed support of Planned Parenthood, Bush is certain that "Dr. King's likely position (had he lived long enough) on one issue: Roe v. Wade" would have morphed into his own brand of virulent anti-choice wingnuttery.

This year is different. The Democrats are trying to win with the same game plan as in 2008, only substitute woman for Black.

On Protectionism (and the scourge of multi-lingual signage):

Message to Mayor Jerry: Adding more languages to the "Welcome to Louisville" sign at the airport looks good, but will be little consolation to unemployed workers left behind if the new foreign owners move the business.

On the 2016 Republican Convention:

Speaking of unguarded moments, there were more than a hundred bare naked ladies protesting something earlier today. You know Trump is onto something huge when he causes people to shed their underwear. Not even Ron Paul could pull that off.

The U.S. State Department announced last week that passport applications would no longer ask for the applicant's mother and father, but instead would require the listing of "Parent 1" and "Parent 2". This prompted me to wonder how to decide the pecking order of one's parents. Now the Secretary of State has tried to cleared up the confusion. Henceforth, the application will ask for "Mother or Parent 1" and "Father or Parent 2."

I suppose that's better than "Thing One" or "Thing Two", but Hillary's hybrid hardly eliminates my confusion. Does she mean to convey "Parent 1" as synonymous with "Mother", thus implying the female is the most important parent? Or does she mean to leave us the option to place our father in the "Mother or Parent 1" box if he is the immediate ancestor the applicant most reveres?

Either way, the qualitative choice of which parent is number 1 -- whether decided by son, daughter or Secretary -- is sure to lead to outrage. Perhaps not Obamacare-level outrage -- but outrage nonetheless.

It's just like the government to decide it needs to decide something like which parent is number one or number two. When that happens, both parents are subservient to the nanny state -- more precisely, a nanny Secretary of State.

One of the dirty secrets of that law House Democratic Leader Nancy Pelosi didn't want anyone to read -- ironically titled the "Affordable Care Act" -- is that, rather than making health care more affordable, it is a vehicle to raise taxes on hardworking Americans. And, surprise, surprise, the taxes -- (not) affectionately known as "HIT" -- do not land their full blow until President Obama is well out the door of the White House.

On Public Financing of Political Campaigns:

Call Senator Barack Obama the new Monica Lewinsky. How so? Both Obama and Lewinsky have demonstrated the ability to change Democrats' minds on what once were rock-solid beliefs that conflicted with the U.S. Constitution. [...arglebargle on Monica Lewinsky turning Democrats against the independent counsel omitted for being too stupid...]

Public financing of campaigns is as constitutionally dubious as the independent counsel statute was. Whereas the independent counsel violated the Constitution by undermining Executive power under Article II, public financing similarly runs afoul of constitutional guarantees by forcing taxpayers to subsidize candidates' political speech in contravention of those taxpayers' First Amendment rights.

In addition to John K. Bush's blogging funtimes (which are NOTHING compared to his wife's, OMG!!!), the fearless leader of the Kentucky Federalist society has some mixed-up views on the right to privacy.

He was particularly irked that the state Supreme Court threw out a state law that criminalized sodomy between consenting adults, citing a right to privacy under the Kentucky Constitution in the wake of a contrary holding of the U.S. Supreme Court under the federal Constitution.

Sure, we all have some mixed-up views. But not all of us are nominees to the second highest Court in the country! Bush's internet blatherings show that he is fundamentally biased on a whole range of issues that will come before him in to the federal judiciary. As the Alliance for Justice put it,

First, Bush’s writings raise serious concerns about whether, as a judge, he will be able to approach the issues presented to him with an open mind, applying the law to the facts of the case without regard to his personal ideology. Second, Bush’s distasteful rhetoric demonstrates that he lacks the judicial temperament necessary to serve as a federal judge.

Exactly! Federal Judges are supposed to be serious people with discretion. Not partisan hacks with verbal diarrhea.

So how did this buffoon get nominated to the Federal Judiciary anyway. Well ... he's been a big backer of Mitch McConnell for 15 years, and he came out early for Trump. So, really, what better qualification could there be for the federal judiciary?

In November 2016, Bush indicated his interest in serving as a federal judge to Senate Majority Leader Mitch McConnell (R-KY). After meetings with McConnell, Senator Rand Paul (R-KY), and officials in the White House Counsel’s Office and the Department of Justice, Bush was formally nominated on May 8, 2017.

And now the filibuster rule is gone, so an idiot whose main qualification is consistently donating to McConnell and Rand Paul is a shoo-in for a lifetime appointment. HOORAY!!

This has been episode 1,957,002 of What Will Trump Break Today? Tune in later today for another dose of this crazy shit! And tip us, too!