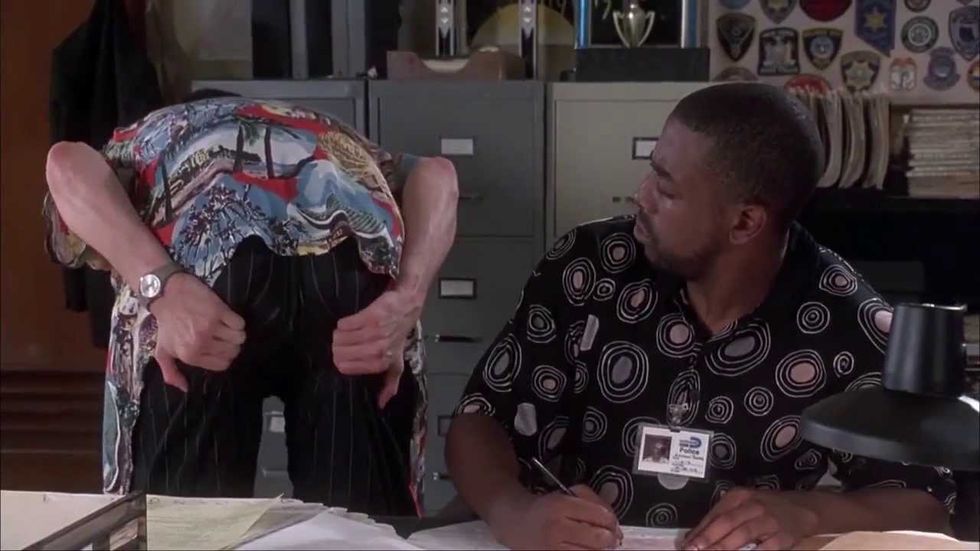 California finally passed its vaccine bill, removing most religious and personal belief exemptions for vaccination in public schools (almost as if contagious diseases really don't care if you don't "believe" in them). Yay for California! But oh no, what is that sound off in the distance? It sounds like a slow leaking fart bursting through a pair of flannel stretch pants. In Canadian!

Oh no wait, sorry, it's just Jim Carrey. And he has a MAAAAAAD about vaccines.

As soon as Gov. Brown signed the bill, Carrey launched into a blistering meltdown all over the Twitter machine, twatting left and twatting right, all about what a fascist this hotshot governor is, just because he wants to keep childrens from dying. You know who else didn't like dead children? HITLER. (Wait, bad analogy.)

Among Carrey's choicer tweets were this gem:

Except the vaccines aren't manditory [sic]. They're required for your brat if you want the screaming pukeball to go to public school. Don't want to save your munchkin from preventable diseases? Go to private school or homeschool. OH THE OPPRESSION.

Carrey went off on a rampage asking for "greener vaccines" which somehow sounds gross. Doesn't that sound gross? Carrey's major contention was with thimerisol in vaccines, a mercury-based preservative that anti-vaxxers think causes autism (along with just about everything).

Problem is thimerisol was removed from vaccines back in the nineties. Oopsie! There's also the fact that there's no connection between autism and mercury, seeing as autism diagnosis rates continued to go up even after thimerisol was phased out of vaccines.

Ace Ventura started waxing about the plights of children affected by the autisms, and decided the best way to do that was to post pictures of other people's kids with autism. Who could possibly be offended?

Maybe the parents of the child Carrey posted, who are throwing a massive shitstorm over his dragging their babe onto his whackadoo soapbox. It's almost like people are defensive about their kids being used unwittingly for political purposes. Clearly they didn't go to the Fartknocker School of the Grifting Arts. You can get your Master's in Child Puppetry in only 4 months!

The parents in question are understandably pissed that a man who used to talk through his anus for a living is accusing them of poisoning their child, especially since they know for a fact his autism didn't come from vaccines; it's from tuberous sclerosis, an actual brain condition with an actual connection to autism. Dammit, why aren't these children and their brain tumors playing along with a celebrity Twitter rampage?

In fairness, Carrey apologized to the parents, but Jesus dude. Still not cool. It also doesn't help that Carrey's crusade has found new life thanks to a slew of failed stars joining his cause, including such big names as Roseanne Barr! And Robert Kennedy Jr.! Being in such illustrious company with failed presidential candidates such as these must mean Carrey's career is following exactly the trajectory we knew it would. Hopefully next time, instead of dragging other people's kids into a fight they didn't pick, he'll do a buddy comedy with Herman Cain and Ross Perot.