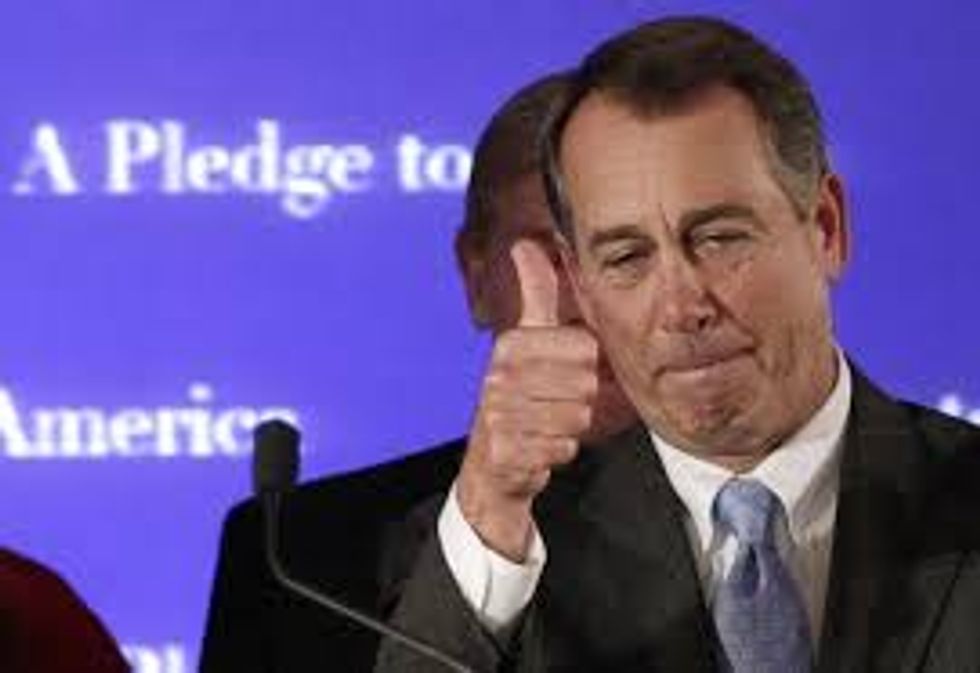 Today, with a perfectly straight face, the House of Representatives voted for the 56th time to repeal the Affordable Care Act, with a vote of 239-186. And this time is different! This time, the Senate is controlled by Republicans, who might also vote to repeal it! But it's okay at the moment, because the White House has issued a veto threat, and Republicans don't have a big enough majority to override a veto. So don't even worry about this until June, when the Supreme Court might overturn it!

Republicans hate the ACA because it's Obama's big achievement, and because it costs money, which they say they won't tolerate (unless costing money somehow helps wealthy people or corporations), and because it takes away all of their freedom to be sick and go bankrupt without insurance. And of course they will replace the ACA with something special, let's not forget that! What if we look into some new Congressional Budget Office (CBO) data on federal health care spending, hmm? Maybe we will learn some new information about the "it costs money" part!

Vox reports that a CBO projection in January 2010 estimated that federal health spending between 2011 - 2020 would cost around $11 trillion. This projection does NOT include costs associated with Obamacare, because the ACA had not been passed yet (it was signed into law in March 2010). Yesterday, CBO came out with a new estimate, and you will be so happy to hear that CBO is revising its earlier estimate DOWNWARD. With Obamacare, federal health spending is estimated to be $600 billion LESS than CBO predicted in 2010! So, prior to Obamacare, more federal spending on healthcare. With Obamacare, less federal spending on healthcare. Hooray! Do Republicans care about this? Nope!

Maybe since Republicans know they won't be able to repeal the ACA legislatively (hi, veto!), they haven't worked very hard on the "replace" part. This wouldn't matter, except that the Supreme Court actually might gut Obamacare this term. Then Republicans will be on the hook for "replace," for real, yo, when all of the health insurance gets yanked away from all of the voters.

House Republicans are completely befuddled about either how to replace the ACA or what they'll do if SCOTUS sinks it in four months. As for replacement legislation, they have a cute wish list, which includes: lower costs, coverage of preexisting conditions, more insured people, keeping your own doctors, and "eliminating job-killing policies and regulations." That is probably a good answer for a 7th grade social studies exam, but that is not good replacement legislation for a 2,000 page law about the insurance industry!

[contextly_sidebar id="vbSioapMS4PHnNIZVQPVWmYHagx4dOKf"]And what if SCOTUS overturns it? According to TPM, Congressman Paul Ryan (R-WI) told reporters this week "We're obviously doing contingency planning for King v. Burwell. It would be wrong not to... That's something that is an ongoing conversation and we're doing all of our diligence on that." It is so nice to hear that Paul Ryan is doing all of the diligence. He sounds like a Wonkette writer!

Does Senator Lamar Alexander, Chairman of the Senate Committee on Health, Education, Labor, and Pensions, have a plan if SCOTUS sinks Obamacare in four months? Nope. Senator Alexander said on Tuesday: "If it creates a shock to the system by causing 5 million Americans suddenly to put their insurance and their subsidies at risk, then we need to think if there’s anything we need to do. Maybe there's not."Maybe 5 million Americans suddenly losing their health insurance will shock the system, and maybe it won't, it's hard to tell! We'll think about it later!

So Republicans are 56 votes and several years into "repeal and replace," with literally no plan, plus SCOTUS could strike down the ACA in four months. And federal spending is projected to be way less under Obamacare than it was projected to be without Obamacare. So why in the hell would you take away the ACA if you are a Republican who has zero ideas about how to replace this framework, and also who pretends to care about spending? You would think that Republicans might be able to look at the pretty awesome CBO numbers and say, okay, that's a good projection, we can work with this framework and fix it so SCOTUS doesn't have to junk it. And if you think that you are completely wrong! Let's shoot the moon and go for vote #57!