Let's Time Machine Back To When Wells Fargo Killed A Dude 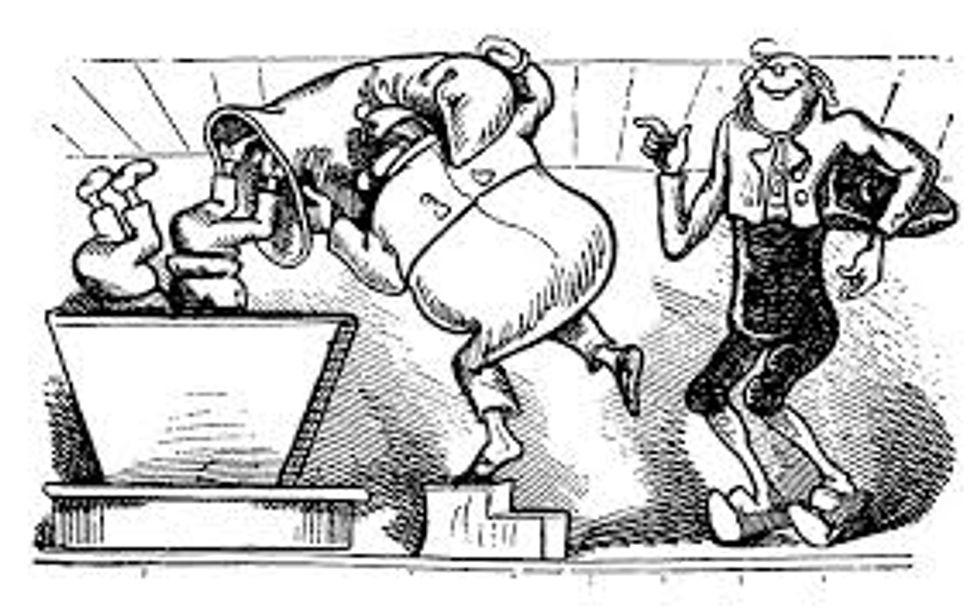 Gather around and let me tell you a morality tale in the traditional style of the Germans which means terror and death. (Have you ever read Max Und Moritz? Recommend for all your little ones at bedtime!)

Cast your mind back into the long ago of 2012, when Mitt Romney was apparently the most evil Republican out there and we all rocked out to "Call Me Maybe" and "Gangnam Style" (unless you're me, in which case you missed both of those things because you were working double shifts the whole fucking year and you didn't have time for culture though now that you're looking at the charts to write this blog post with, you're kind of glad that year flew past you) and everyone was still hugely mad at all the banks because of the ruining-the-world-economy and then the bailout thing.

America was still in a housing crisis as the economy reeled from the magnitude of financial fuckery, and we couldn't get a homeowners' relief bill that would do anything about it, and that is how Larry Delassus came to die in open court fighting a foreclosure that Wells Fargo never should have executed.

This is John Stumpf, who was the CEO of Wells Fargo in 2012, a year he made nearly $23m and a year in which Larry Delassus died.

Are you ready for some epic fuckery? Because Wells Fargo brought you all the reasons for pitchforks you should ever need.

In early 2009, Larry got a letter from the bank informing him that due to the fact they'd had to pay his delinquent property taxes, his mortgage would be doubled effective immediately. At the time, Larry was actually six months ahead on his taxes; the bank had paid off his neighbor's debt and they made a typo, so that became Larry's problem. The veteran, in his sixties, suffered from a rare liver disease. He was on a very fixed income. He could not pay double the mortgage. By December, Wells decided to foreclose.

Larry had gotten a lawyer, but he didn't specialize in mortgage or housing law. The lawyer found out about the typo and went to Wells. The bank, being the amoral cambions they are, admitted their mistake but said that now the situation had dragged on so long they just couldn't reset Larry's mortgage back to what it should be. He would have to pay a reinstatement fee of the past due amount (which, reminder, he should never have been charged) plus whatever other bullshit they could tack on.

Weirdly though the bank didn't seem to want the money that badly, as they refused to tell Larry how much he would have to pay to reinstate his mortgage. Like, hung up on him when he tried to call. Then I think they must have had a meeting on the eighth floor and they came up with an even more bullshit response: They gave Larry 24 hours to come up with the amount he'd need to avoid foreclosure: $337,250.40.

They sold his house while he was in the hospital.

Now all of this is in the record and testified to in a court of law. It is settled fact. A bank officer came to court and testified that yes, they'd made an error, and yes, they'd refused to give the sick dude any information, and yes they'd refused to tell him how to fix it. And none of that fucking mattered, because Larry Delassus had not had the scratch to float the bank a loan of double his mortgage every month while they unfucked themselves.

Larry died in open court on the last day of his case, just before the judge was to deliver a ruling against him.

And that's not even the most fucked part. The WORST part was this statement that Wells Fargo actually published. See if you can spot the line where the PR flak who wrote this actually unfurled her wings like this was Night On Bald Mountain.

Yep you read that right! See the PROBLEM was that Larry wanted his day in court and his friends supported him in that desire and nobody was thinking of the bank's rights in all of this!

Anyway, when you've found your preferred farming implements let me know where and when we're meeting.

This is the first in an occasional series reaching back in time to scream about bankers. Wonkette is not a banker and doesn't steal from anyone. Please help us stay ad-free and living in houses.