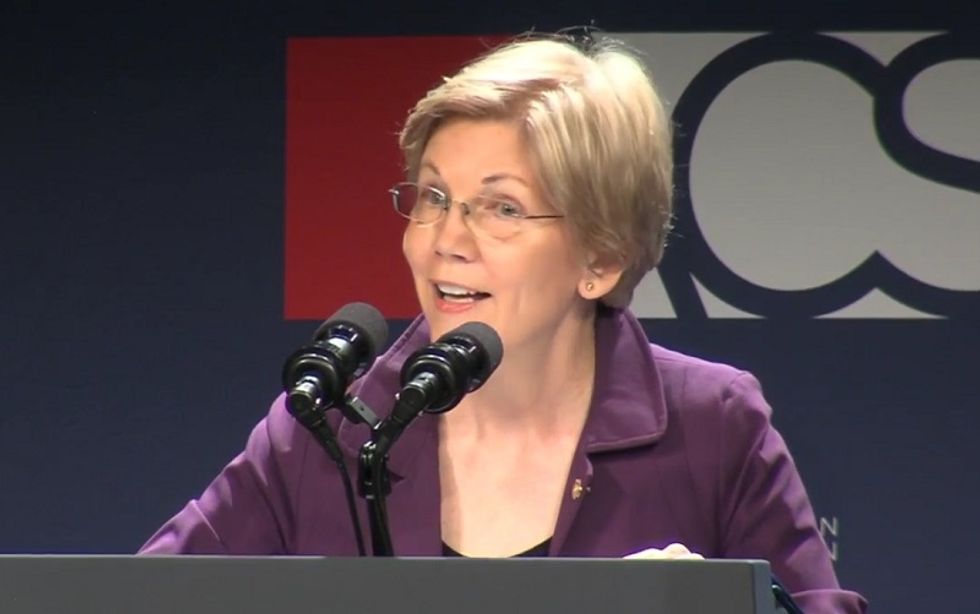 Elizabeth Warren had a busy Thursday, stomping all over Donald Trump's fraudulent, not-temperamentally-suited-to-be-president butt in a speech to the American Constitution Society, and then endorsing Hillary Clinton in an interview with Rachel Maddow. As usual, her Trump demolition was glorious, and you need to watch the video of the whole speech to truly appreciate it. Just stop your whining and click "play" on the video right now, you.

Fine, maybe you can't watch videos at work and you still want to know what Warren said to the ACS. We will indulge you with some highlights, because we are always generous that way, and because there's a transcript.

Trump tells everyone who will listen that he’s a great businessman, but let’s be honest — he’s just a guy who inherited a fortune and kept it rolling along by cheating people.

When that’s your business model, sooner or later you’re probably going to run into legal trouble. And Donald Trump has run into a lot of legal trouble. Ah, yes — Trump University, which his own former employees refer to as one big “fraudulent scheme.”

Many of the Trump University victims ended up deep in debt — sometimes tens of thousands of dollars with no way to pay it off. Trump’s employee playbook said to look for people with financial problems — because they make good targets. He even encouraged his salesforce to go after elderly people who were trying to create a little financial security.

I taught law for more than 30 years. Ask any lawyer in America and they’ll tell you that sounds like fraud. And that’s exactly what Donald Trump is being sued for -- fraud, and worse, for targeting the most vulnerable people he could find, lying to them, taking all their money and leaving them in debt.

Hey, Did You Notice Trump's A Racist?

Understand what this is. Trump is criticizing Judge Curiel for following the law, instead of bending it to suit the financial interests of one wealthy and oh-so-fragile defendant.

Trump also whined that he’s being been treated “unfairly” because “the judge … happens to be, we believe, Mexican.” And when he got called out, he doubled down by saying “I’m building a wall. It’s an inherent conflict of interest.” He’s personally directed his army of campaign surrogates to step up their own public attacks on Judge Curiel. He’s even condemned federal judges who are Muslim -- on the disgusting theory that Trump’s own bigotry compromises the judges’ neutrality.

Like all federal judges, Judge Curiel is bound by the federal code of judicial ethics not to respond to these attacks. Trump is picking on someone who is ethically bound not to defend himself -- exactly what you’d expect from a thin-skinned, racist bully.

Was There More? Why Yes, Yes There Was!

We'll do these bullet point-style, for to make it easy:

You'll also want to be sure to catch Warren's impression of Mitch McConnell saying "well, gee, you know, 'Donald Trump is certainly a different kind of candidate.'" It's not quite as hilarious as John Stewart's, but he was doing Cecil Turtle from the Bugs Bunny cartoons anyway.

How About Other Republicans? Any Good Lines There?

Paul Ryan and Mitch McConnell want Donald Trump to appoint the next generation of judges. They want those judges to tilt the law to favor big business and billionaires like Trump. They just want Donald to quit being so vulgar and obvious about it.

And keep watching for her list of hero lawyers right at the end: John Adams, who "defended the British soldiers after the Boston Massacre, and went on to serve as President of these United States," Abraham Lincoln, one of those awful defense lawyers who protected the rights of accused murderers, Thurgood Marshall, who argued Brown v. Board of Education, and then, to huge applause,

We are the nation of Ruth Bader Ginsburg -- a lawyer who fought for gender equality, and went on to serve on the Supreme Court of these United States.

That is who we are. And we will not allow a small, insecure, thin-skinned wannabe tyrant or his allies in the Senate to destroy the rule of law in the United States of America.

And then Elizabeth Warren wiped the dust from her ass-kicking boots and headed over to "The Rachel Maddow Show" to endorse Hillary Clinton. We'll have a post on that for you in just a little bit!