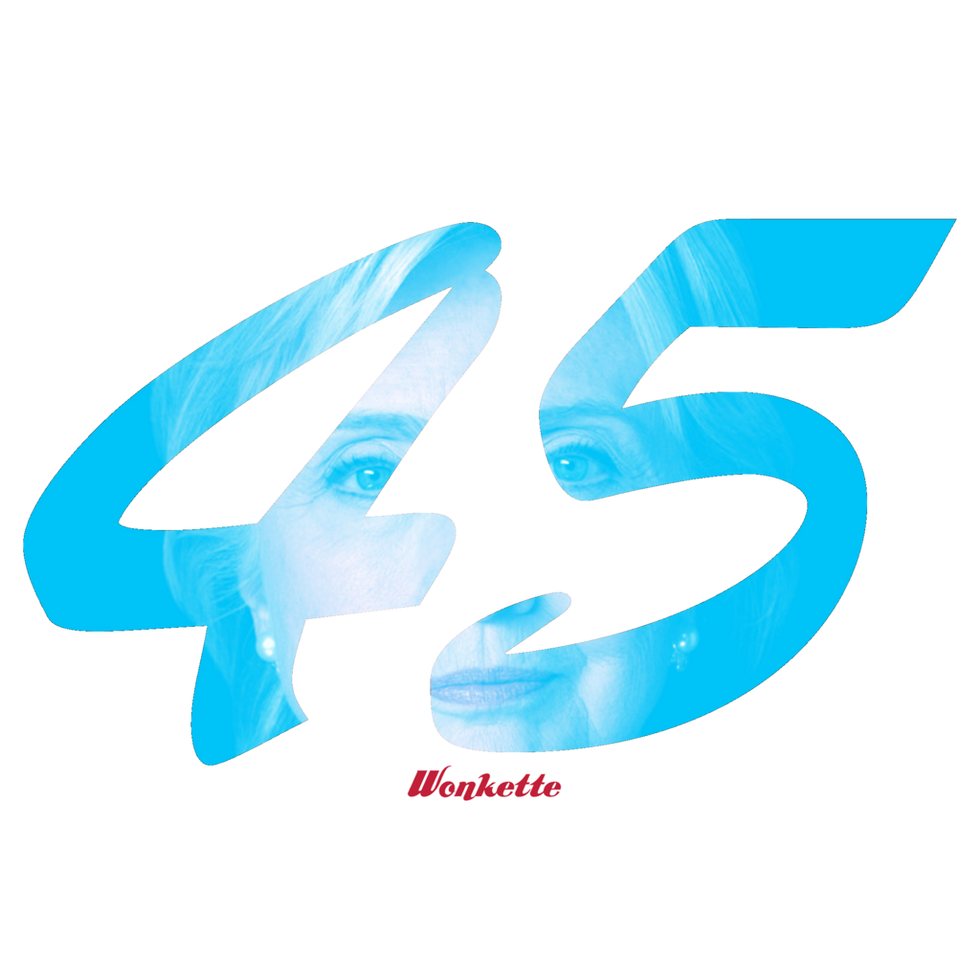 Yesterday I looked at my daughter. I was so proud, of her and for her. She would never remember how hard it had been to elect a woman president. Ho ho ho, I thought, how she will laugh at me when I tell her we made a woman crawl through broken glass to obtain the White House. I cackled with my women's email group, as they planned their special voting outfits they'd been waiting decades for. It was frivolous, and fancy, and fun.

Hillary will be speaking this morning, at 10:30; you can and should watch the livestream with us!

But in the meantime, I want to thank Hillary Clinton for being badass, for just the past 60 years or so. She's a great feminist, a better liberal than she's given credit for, has killer space emperor jackets, married a shithead, worked for all of us. She worked to integrate housing when Donald Trump was getting sued for discrimination by Nixon's DoJ. She worked for foster kids and disabled kids. She worked for poor kids to eat, and in exchange got savaged by the smug assholes of the left who were too myopic to see that she could drink their liquor, take their women, and still vote against 'em -- 'em being Wall Street, you dicks -- and who blamed her for every social ill foreign and domestic going back to the Titanic.

Even now there's jerks on Wonkette's facebook page dancing in delight over the "end" of the "neoliberal" Democratic party -- as if, to paraphrase one of our commenters from last night, all those Duck Dynasty watchers would have voted for Bernie over the celebrity from the teevee who promises to kill all the Muslims and beat up anyone who looks different from them.

That "neoliberal" wing of the Democratic party -- the ones who supported Hillary Clinton -- were black men and ESPECIALLY black women (as always, doing the hardest lifting for all of us); Hispanic men and ESPECIALLY Hispanic women (though Trump was right; not as many as we thought!); gay people who like not being second-class citizens; educated white women who knew for sure that this time our friends were there with us; a couple good white guys; and some funky olds. When you dance on that coalition, you're not dancing on Wall Street's grave. It will be a thousand times more powerful. Instead, you're dancing right on the foreheads of the parents who still pay your phone bill, and the sister who was so proud for her little girl. Fuck Obamacare. Kiss those 500 million new solar panels goodbye. Say adios to the economy, which has been such a disappointment to you with its 4.9 percent unemployment. Say ciao to any chance for our black brothers and sisters to have a listening ear at the top in their never-fucking-ending struggle for basic dignity under the law. Supreme Court? It has Jeff Sessions on it now, if not Actual Sarah Palin, you betcha!

So, you've been very helpful! And thanks!

We thought we were having a wave election, but we didn't know we were right.

Oh, that robot. Oh, that fake. Oh, that dishonest woman who lies all the time forever, and got emails at her home!

Hillary Clinton is a better woman than most of us, and we've made her eat mountains of shit. And we just let her lose to that man. President Obama is going to have to leave a gracious note in the desk for him.

Can you believe we've done something so demeaning to the both of them?

Thank you, Hillary Clinton. You've run a kickass campaign. You inspired millions. You mixed proper warnings of the orange cretin with optimism about what our country should be. You were decent and intelligent and warm and sober, and we picked at you mercilessly and failed you, bigly.

If you're having a cry, we're crying too.