Let's Watch Hillary Clinton Dance With That Ken Bone Dude, Because It's Friday 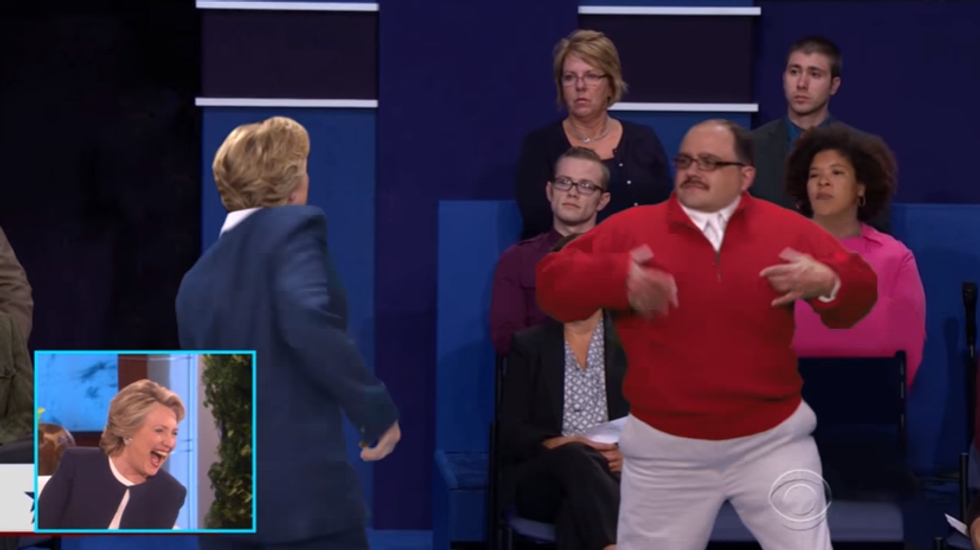 What, you didn't think we were going to leave you for the weekend with Donald Trump's disgusting fingers, did you? No, we are going to watch Hillary Clinton on the Ellen DeGeneres TV program instead. Now, we learned Friday that Ken Bone, the dude who became all famous after he asked a question at the second presidential debate, is kind of ahem, problematic in some ways. But that is not the point of this video. The point is that Ellen made a funtimes video of Hillary and Bone HAVING A DANCE-OFF, and it made Hillary cackle with glee. She really does have the best laugh.

After the dancing, Hillary says what she wants for her 69th birthday. Hint: It's not more WikiLeaks. (By the way, good god, all those WikiLeaks coming out are gigantic nothingburgers, aren't they? Sheesh.)

Also, on the subject of her birthday, Hillary notes that, assuming she is elected, she will be the youngest woman ever elected president of the United States. HAW HAW!

Do you want to watch more Hillary Clinton on Ellen? YEAH YOU DO. Here is some interview, where Hillary talks about getting stalked by Trump during the debate, and gives her advice on pneumonia (which is you need to settle the hell down for a few days instead of trying to push through it like a common HERSELF). Aren't you glad we gave you these videos, instead of ending the week with Trump's pussy-grabbing?

Have a lovely weekend, unless some insane bombshell drops at 5 PM this afternoon like it did last Friday, in which case you are required to stay with us all weekend while we work, HAHA SUCKS TO BE YOU.