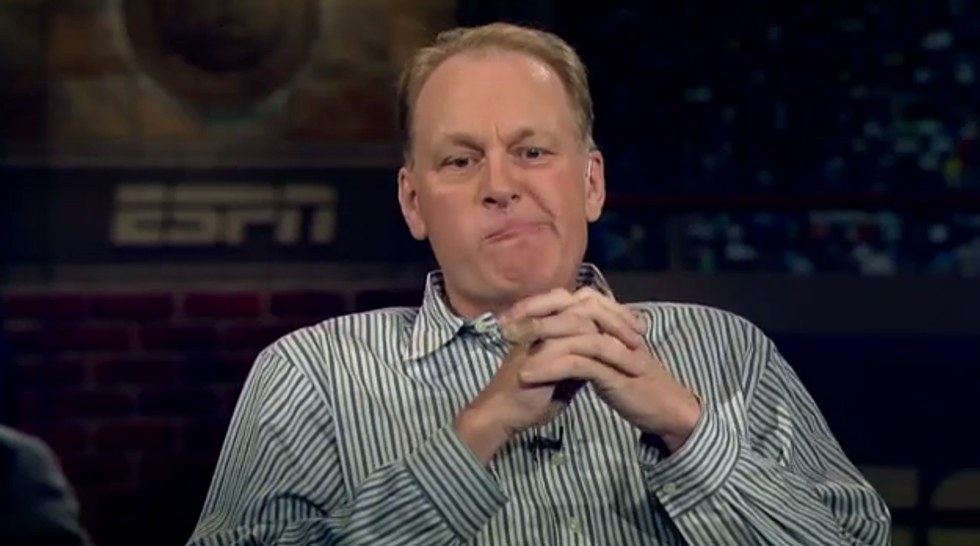 There’s no crying in baseball -- but Curt Schilling is retired now so he’s free to cry and whine and moan and play the victim all he wants. After all, that’s America’s true favorite pastime, if you’re a Republican. Which Schilling is, and he’s just sure everyone knows it, and he’s just sure that’s why he wasn’t voted into the Hall of Fame.

You know who did get voted in? That commie librul pinko John Smoltz.

Schilling has a few things to say about that. In a radio interview with WEEI (a Boston radio station presumably named while sitting on a slide), Schilling came up with three good reasons why Smoltz got in and he didn’t.

“I think he got in because of [Greg] Maddux and [Tom] Glavine. I think the fact that they won 14 straight pennants.”

Yeah, so Smoltz only got in on the strength of his teams. Which is pretty much the biggest dick move there is when sportsballers are talking about other sportsballers.

“I think his ‘Swiss army knife versatility,’ which somebody said yesterday, I think he got a lot of accolades for that.”

Okay, so Smoltz wasn’t an entirely talentless hack. He was pretty flexible, but come on, we all know the REAL reason Smoltz was a hit with the Hall of Fame voters.

“And I think the other big thing is that I think he’s a Democrat and so I know that, as a Republican, that there’s some people that really don’t like that.”

Oh, noooooo! Schilling is being repressed and beaten and imprisoned for his political beliefs, just like that Martin Luther King guy and Ted Nugent and all those Christian bakers who don’t want gay people licking frosting off their buns. Cry all the tears, sportsball fans!

After all, the facts speak for themselves. Schilling was an outspoken defender of George W. Bush, while Smoltz maxed out in contributions to Mitt Romney.

Yeah, actually, Smoltz is a big time Republican donor who is regularly courted by the Republican Party to run for office as a Republican.

Okay, sure, that's pretty Republican. But let's look at just how big a Republican Schilling is: He got the government of Rhode Island to guarantee a $75 million loan for his company, Solyndra-style (GASP!), which then went bankrupt, Solyndra-style (DOUBLE GASP!), sticking the taxpayers with the bill.

(And when he got sued over the whole fiasco, guess what he said about the lawsuit? “Politically motivated” because he’s a Republican, natch.)

Of course, this morning, Schilling is playing the “just a joke” card over the whole Hall of Fame thing. Because whining and courage rarely go hand in hand.

But if you listen to the interview, this wasn’t a one liner. Schilling goes on and on about his prosecution complex …

“When human beings do something, anything, there’s bias and prejudice,” said Schilling. “I do know there are guys who probably will never vote for me because of the things I said or did. That’s the way it works.”

Consequences for his actions! UNFAIR!!! This is a man who was able to throw a small ball with great speed and accuracy! As if anything could matter more than that. Next thing you know, the Hall of Fame voters are going to be holding it against him that he accused them of being a bunch of left-wing stooges. It’s a travesty, is what it is.

Life is so tough for the rich and conservative.