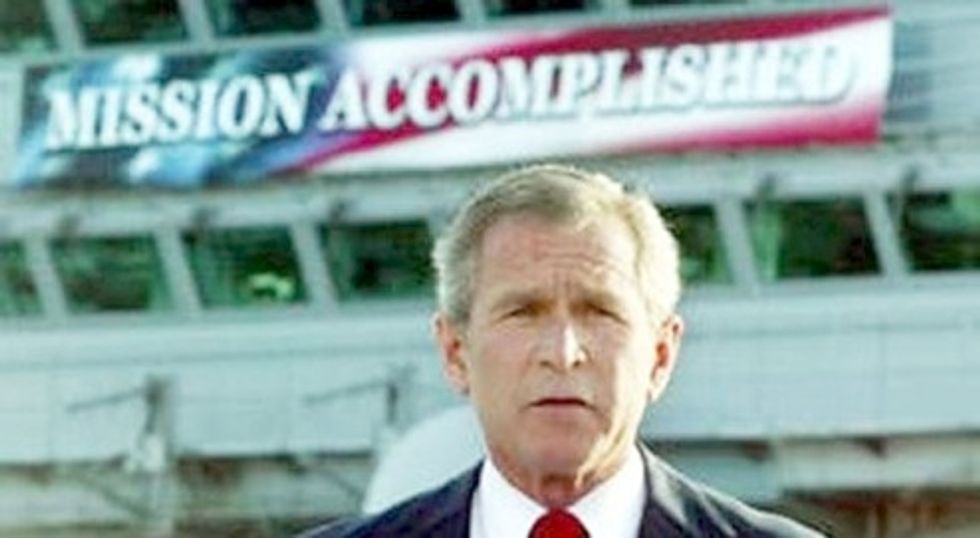 Just like children, catch phrases continue to age long after they quit being cute. And so it was with "Mission Accomplished," a banal phrase on a banner strung up behind old what's-his-name on that day, six years ago, when he dressed up like a space-pilot action figure and was flown in a little plane which landed on a big boat. We've all learned a lot since then, maybe.

Three kinds of Americans were revealed on that day: the ones who looked upon these images with a simple patriotic pride, the ones who were all Oh jesus christ, stage-manage much?, and the vast unwashed MySpace masses who sort of missed the whole "Iraq Invasion" news but could tell you exact directions to every Taco Bell in the tri-county area.

Then, a few weeks after Bush Junior was trotted out on an aircraft carrier to announce the end of a terrible, stupid war which is still probably decades away from over, a fourth group of Americans revealed themselves: They were the ones who would say, in a sneering manner, "Mission Accomplished" in response to anything involving Bush or his administration or Republicans or, finally, things that didn't even have to do with politics or war at all.

It is these people who ruined America, after the other people (Republicans) ruined the other part of America.

And it was about this time, six years ago, when the little trade magazine with the newspaper job ads in the back somehow turned into a liberal website featuring liberal usage of the "Mission Accomplished" slogan, in ironic tones, forever.