Lie To Me, Sean Spicer, Lie To Me! Your Trump News Conference Liveblog! 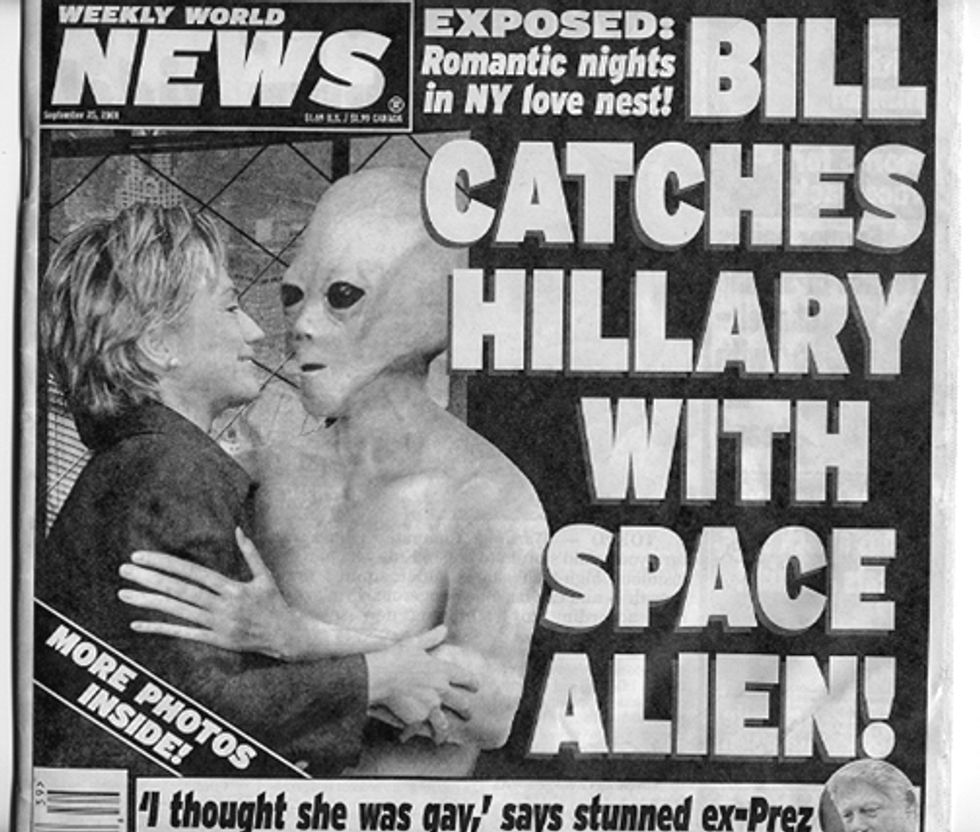 Hello world! Trump Press Secretary Sean Spicer is doing his first OFFICIAL lie conference, which is different from his Donald Trump-scripted temper tantrum Saturday, where Spicer did his best impression of Donald Trump, by having a temper tantrum and then refusing to answer questions. Anyway, this one will be different! Spicer will still do lots of alternative facts to us, because lying is the only thing the Trump presidency will ever make great again.

In fact, there is likely to be so much lying that there's a serious debate out there over whether serious news outlets should cover Spicer's (or Trump's) statements live. CNN didn't do that on Saturday, instead choosing to report on it real quick after it was over, about how full of lies it was. However! According to this nice article in Slate, Wonkette is totally allowed to livebloog this, because here is why:

...[D]on’t live-tweet or live-blog ... unless you are certain you’re not just retransmitting bogus information.

We are FOR CERTAIN that this mommyblog and dick-joke factory (which is committed to JOURNALISM!) will not simply re-transmit whatever premature hate spooge Spicer lobs at America's face, and our tweets will have a lot of cusses, about what damn liars these people all are.

So, shall we watch a presser together and make fun of it? YES LET'S.

1:32: Hi everyone. We don't actually have to watch this because they are already late like a common Obama, and also why not let's just live-blog season 1, episode 1 of "The West Wing"? OK, so SPOILER ALERT, the president is out of town and he ran into a tree with his bicycle and everybody in the West Wing is like "golly not now!" Meanwhile Rob Lowe makes sexuals with a fancy lady but he finds out she is a fancy HOOKER LADY, but he didn't pay her because they did sex just because.

1:34: So, the "Josh" one, he went on a teevee show and said Christian Right people are dumb stupidheads, RIGHT TO THEIR FACES, and this is like #scandal, because he is not supposed to say that! So they have to have a beer summit but Toby gets mad when he realizes the Christian Right lady is making anti-Jewish words RIGHT TO THEIR FACES but then President Bike Problems lands in his aero-plane and yells at everybody and the meeting is over.

Still no lying Sean Spicer, what a waste of time.

1:37: What if we literally never liveblogged a Sean Spicer press conference ever, and just live-blogged the Allison Janney one doing pressers instead? They are better anyway, and Allison Janney is our favorite, whereas Sean Spicer is a tool.

1:43: OH IT IS FINALLY STARTING, WE ARE FOR EXCITED #ALTERNATIVEFACT

1:44: It still looks like America, but we are not convinced.

Hmmmm. Still no Sean Spicer, though. Trump is probably being burped.

OH just kidding here he is.

1:46: Blah blah, Trump talked to governor of Georgia about bad weather, had breakfast with the dude from Dell and Elon Musk and a bunch of other CEOs today, and things. Those are probably true, but be skeptical.

1:48: Trump pulled us out of TPP, brought back Reagan's global gag rule on 'bortion funding, and other things. Spicer seems like he is trying to be nice. He emailed Bamz's press secretary Josh Earnest and said Earnest will stay the most popular press sec, because everybody thinks Spicer is a douche. #NOTFAKENEWS

1:50: Trump had lunch with Mike Pence, because it was time for lunch. This is a thing you do, when you are hungry. God, this is a boring thing, get to the questions so somebody can make him SO MAD. Here is a picture:

AND MORE FYI, of the fact-checking variety:

1:57: As intern Dominic points out in the Wonkette secret chatcave, the first question went to Murdoch tabloid New York Post, and he's calling on randos and Fox News, and ignoring the two front rows. This is Trump's America, y'all.

2:05: Donald Trump DEFINITELY has a "mandate" to repeal and replace Obamacare with something yooger and cheaper and more freedom-y. We don't think this is a "lie" as much as something where the Republicans are going to get a huge rude awakening when they realize Obamacare only works because of things like the individual mandate, and so forth.

Also they don't know yet whether we are going to fight ISIS with our new best pal Russia.

2:08: We should do "The West Wing," episode 2 now? Nah, just kidding. Sean Spicer just got asked if he was going to lie a lot, and he said he will tell the truth, and "our intention is never to lie to you," which is a damn lie.

2:10: They are trying to smooth over from Saturday HARDCORE. Given the opportunity to fact-check himself on his lies on Saturday, he is NOT doing so. He still claims more people ever watched the Trump inaugural than ever. He sees "no numbers that dispute that," because everybody was watching on their phone and their tablet.

This is so dumb.

2:13: Ronald Reagan is not the winner of inauguration viewers, because Reagan did not have Snapchat or YouBook, and Trump does. And now Spicer is mad again because of the FAKE NEWS (mistake) report that Trump had removed the bust of MLK Jr., because THAT'S NOT RACIALLY TRANSCENDENT.

2:15: Sean Spicer says Trump didn't have a feud with the intelligence community. That is simply a damned lie.

2:23: The Trump administration doesn't know how to pull out of all our trade deals yet, but they promise they will figure it out.

2:27: Somebody just Googled and found Wonkette with the search "Sean Spicer gay." WE DUNNO IF HE IS, STOP DOING ALTERNATIVE LIFESTYLE FACTS TO US, GOOGLE PERSON!

(Is he? Well he has a wife and children, so looks like he's not. We'll stick with that interpretation, unless there is a #scandal!)

2:29: Re: the Women's March and stuff and things, Spicer says Trump respects the First Amendment (uh huh) and that a lot of the ladies weren't protesting Trump. Anyway, Trump will reach out to all these women, probably by grabbing them by the pussy (allegedly).

2:33: Sean Spicer says Trump has given no indication that he'll stop the intelligence community from investigating his (allegedly!) collusion with Russia during the campaign. UH HUH, WE'RE WATCHING, YOU FUCKERS.

Says Trump has also definitely for real left his companies, we are so sure.

2:36: Sean Spicer is not very good at press secretary-ing. MAYBE HE HAS FIRST DAY JITTERS. Or maybe he s-u-c-k-s.

2:38: Spicer does not know if Preznit Trump (ugh) will keep Preznit Obama's (yay!) executive order barring anti-LGBT discrimination, like those gay Republican homosexuals at the Log Cabin Republicans are asking. THERE'S ANOTHER THING TO PAY ATTENTION TO!

Also, lots of answers about "we dunno, it's our first day, like Kellyanne Conway hasn't even arranged her stuffed animals in her office and Jared Kushner is putting together his IKEA office furniture and cursing, none of us knew this was going to be a lot of work!"

2:43: Spicer says Trump WILL preserve and protect Social Security, even if Paul Ryan wants to kill it dead. Now, remember to beware Republican double speak on "saving" Social Security by "privatizing" it. Also remember that Trump does whatever the last person he talked to says he should do. THREAT LEVEL: Still high.

2:46: Oh Christ, we are now having another pissing contest about inauguration sizes. Now we are including viewers from "around the globe" to bolster the Trump administration's belief that they had lots more VIEWERS than Obama.

2:48: We are supposed to "listen to the the tape" when considering whether MILLIONS OF CIA EMPLOYEES were "hooting and hollering" for President Trump, and we should definitely not pay attention to reports that Trump packed that room with his own people, who were instructed to clap for Dear Leader, like he did in his news conference a few weeks ago, the day after PeePeeGate burst into the news.

2:52: Oh good gravy, we are now re-litigating how mean the press was to Trump, because there's this "constant attempt to undermine [Trump's] credibility," DEAL WITH IT, CUPCAKES, YOU WERE ELECTED AMERICAN PRESIDENT (BARELY). It is literally the most criticized position on the planet, and it's not for sniveling snowflakes.

2:54: YOU ARE DEMORALIZING THE NICE PEOPLE IN THE NEW WHITE HOUSE WHEN YOU MAKE FUN OF THEIR SMALL ATTENDANCE AND HOW THEY ARE BAD AND STUPID! WON'T ANYBODY THINK OF DONALD TRUMP'S "MORALE"?

Yes he keeps saying "demoralizing" and "morale," and we are just all Mean Marcuses and Nasty Nancys for not caring enough.

Sean Spicer is waaaaaay out of his league. Also has hard time pronouncing "Pena Nieto," the name of Mexico President. He will probably call him President Neato Penis before this is done.

3:00: OK it is over and we have all learned a lot, so long, farewell, aufwiedersehen, fuck you.