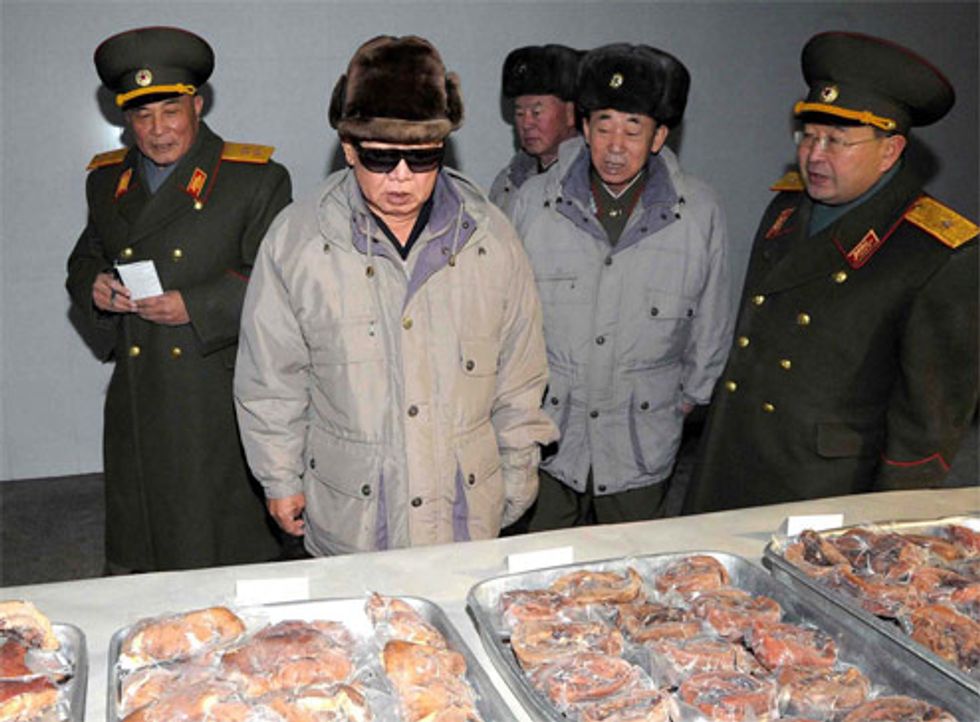 Did you hear there's a new "dictator in waiting" in lovely North Korea? He's the twerp child of the current twerp, who is the child of the OG twerp, because that is how democracy works in the people's paradise of North Korea. And this new kid, 26-year-old Kim Jong-Un, is"deliberately destabilizing the environment in order to mobilize the military and consolidate his power" -- by bombing stuff! North Korea started shelling this little island in South Korean territory because it's full of civilians and houses. So far, a couple of marines from the south have been killed and a dozen-plus residents are hurt and everything is on fire.

Do you ever read these stories and think, "Gah, what kind of insanity causes the same exact people to just bitterly antagonize each other for 65 years?" Like a lot of things that are just plain retarded on Earth, this goes back to a couple of American military officials just randomly drawing lines on a map and then saying, "Here! Make sure to appreciate freedom!" This is actually the exact thing that happened.

This is from an actual U.S. Army history that is unintentionally hilarious/terrible:

Though American military planners ostensibly paid little attention to Korea, they had Korea in mind. On 25 July 1945, the Army Chief of Staff, General of the Army George C. Marshall, sent a note to President Truman at Potsdam, advising him that some guidance on handling Korea would assist the Joint Chiefs of Staff. General of the Army Douglas MacArthur, Commander in Chief of the United States Army Forces, Pacific, had already received instructions to prepare for occupying Japan, and shortly before Potsdam these orders were broadened to include Korea. In response to the additional directive, General MacArthur suggested that Tokyo and Seoul have first priority for occupation, Pusan second priority, and the Kunsan area on Korea's west coast, third priority. General Marshall then informed the President that MacArthur should be able to land a division at Pusan within a short time of the end of the war. The other strategic areas in Korea, Marshall added, were Seoul, near the west coast, and Ch'ongjin, in the north on the Sea of Japan. Marshall expected that the Russians, if they participated in the occupation, would occupy Ch'ongjin and would undoubtedly move into Manchuria and perhaps into north China. He considered it desirable, therefore, to establish early control over any areas to be held by the United States.

Korea was only briefly considered at the Potsdam conference. Among the questions discussed were the Soviet timetable for entering the war in the Pacific and the Allied proclamation demanding Japan's unconditional surrender. Looking ahead to the surrender of the Japanese on the Asiatic mainland, the Allied military representatives drew a tentative line across the map of Manchuria, above which the Soviet Union was to accept surrender of Japanese forces. No mention was at first made of Korea. But since thousands of Japanese troops were stationed in Korea, there was a later discussion of Allied operations in that area

Russian entry into the war against Japan on 9 August, and signs of imminent Japanese collapse on 10 August 1945 changed U.S. Army planning from defeating Japan to accepting its surrender .... Under pressure to produce a paper as quickly as possible, members of the Policy Section began work late at night on 10 August. They discussed possible surrender zones, the allocation of American, British, Chinese, and Russian occupation troops to accept the surrender in the zone most convenient to them, the means of actually taking the surrender of the widely scattered Japanese military forces, and the position of Russia in the Far East. They quickly decided to include both provisions for splitting up the entire Far East for the surrender and definitions of the geographical limits of those zones.

The Chief of the Policy Section, Col. Charles H. Bonesteel, had thirty minutes in which to dictate Paragraph 1 to a secretary, for the Joint Staff Planners and the State-War-Navy Coordinating Committee were impatiently awaiting the result of his work. Colonel Bonesteel thus somewhat hastily decided who would accept the Japanese surrender. His thoughts, with very slight revision, were incorporated into the final directive. [17]

Bonesteel's prime consideration was to establish a surrender line as far north as he thought the Soviets would accept. He knew that Russian troops could reach the southern tip of Korea before American troops could arrive. He knew also that the Russians were on the verge of moving into Korea, or were already there. The nearest American troops to Korea were on Okinawa, 600 miles away. His problem therefore was to compose a surrender arrangement which, while acceptable to the Russians, would at the same time prevent them from seizing all of Korea. If they refused to confine their advance to North Korea, the United States would be unable to stop them.

At first Bonesteel had thought of surrender zones conforming to the provincial boundary lines. But the only map he had in his office was hardly adequate for this sort of distinction. The 38th Parallel, he noted, cut Korea approximately through the middle. If this line was agreeable to President Truman and to Generalissimo Stalin, it would place Seoul and a nearby prisoner of war camp in American hands. It would also leave enough land to be apportioned to the Chinese and British if some sort of quadripartite administration became necessary. Thus he decided to use the 38th Parallel as a hypothetical line dividing the zones within which Japanese forces in Korea would surrender to appointed American and Russian authorities.

The determination of the surrender zones for the Pacific involved other countries besides Korea. Since the job had to be done in a hurry, Colonel Bonesteel had the paragraphs of the general order rushed through the Chief of the Strategy and Policy Group, Brig. Gen. George A. Lincoln, to the Joint Staff Planners who were meeting in an all-night session.

Everybody accepted this paper as a very well-done paper, considering he had no real maps and Wikipedia did not yet exist, and Russia signed off on it, and two happy new countries were created. Here is the "punchline," if you like jokes:

The new dividing line, about 190 miles across the peninsula, sliced across Korea without regard for political boundaries, geographical features, waterways, or paths of commerce. The 38th Parallel cut more than 75 streams and 12 rivers, intersected many high ridges at variant angles, severed 181 small cart roads, 104 country roads, 15 provincial all-weather roads, 8 better-class highways, and 6 north-south rail lines. [18] It was, in fact, an arbitrary separation.

Anyway, as the United States has long considered the "nuclear option" (as in actually nuking North Korea), maybe this will provide a chance for Barack Obama to prove he is a True American by shooting another missile -- this one a live nuke -- from the California Coast to Pyongyang. It would be a Thanksgiving miracle!