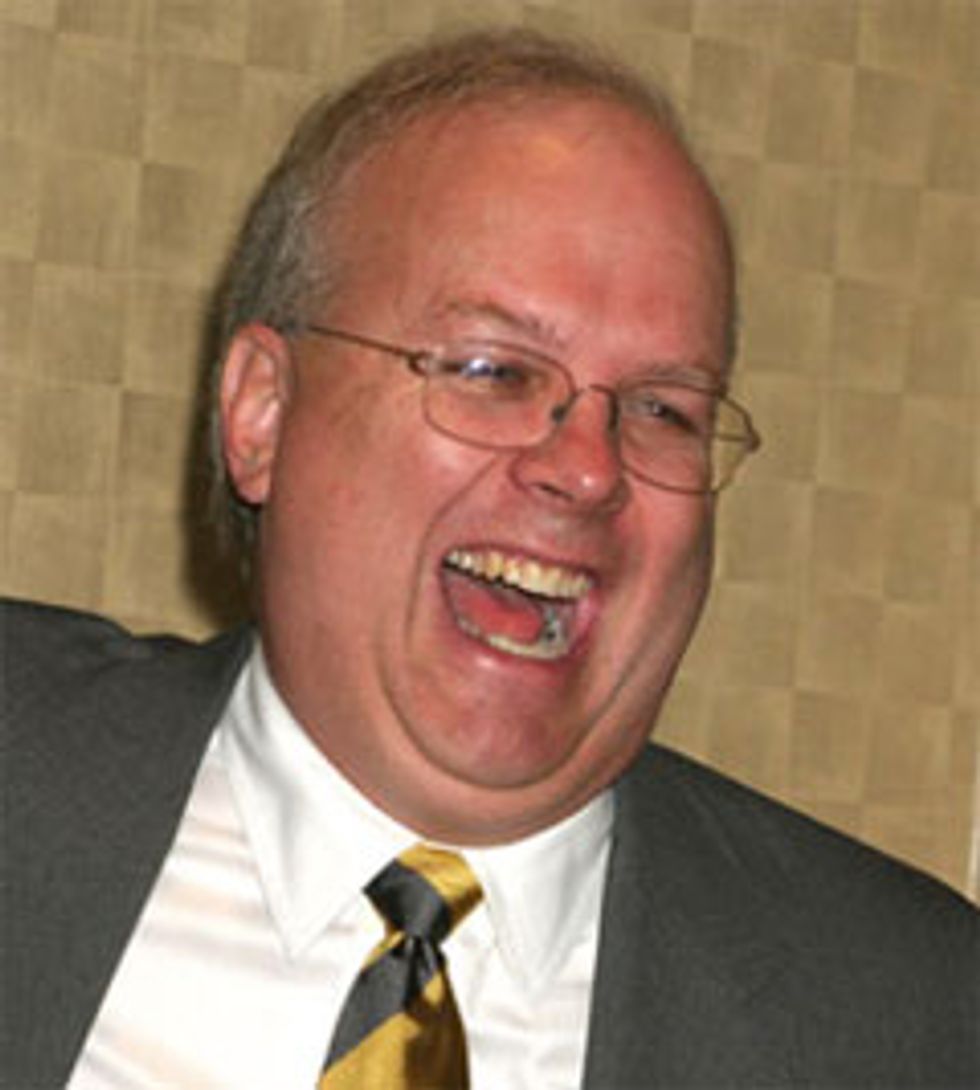 Who among you supposed — nay, dreamed — way back in 2008 that Karl Rove, having completed his task of gifting George W. Bush to America, would take his balls and go home and stop messing around with democracy? Well, we hate to be the bearers of bad news, but not only does he have a $200,000,000 SuperPacto screw around with, he’s also been going on the Sunday morning yap shows to talk about Bush’s “accomplishments” and writing op-eds for the Wall Street Journal that misquote Bill Clinton. Now he’s back with ANOTHER op-ed, also in the Wall Street Journal, this one focusing on the fact that the GOP has a “Medicare advantage” over the Democrats. And surprise surprise, this one is as poorly sourced and given to hyperbole and obfuscation as the last one. But it’s Karl Rove, leader of the GOP Hive Mind, so we figure we should pay attention!

Predictably, Democrats went after Mitt Romney's new running mate immediately, describing Paul Ryan as a "certifiable right-wing ideologue" whose views are "extreme" and "radical." They focused on Medicare, warning that Republicans "would end Medicare as we know it," making it "a voucher system" that costs seniors "thousands of dollars in health care costs."

Well those Democrats are WRONG. According to Karl Rove, Paul Ryan is not an ideologue, and the GOP is better for Americans on Medicare. (Note: this is coming from Karl Rove, which is a little like Sarah Palin saying that Michele Bachmann isn’t a nutjob and also that the GOP is better for Muslims. Anyway, we digress. Back to Karl Rove's main point, which is his lies about Medicare generally and not Paul Ryan specifically.)

For one thing, the GOP doesn't cut Medicare spending. This fiscal year, Medicare outlays will total $503 billion. Even under the House GOP budget—considered the most parsimonious plan out there—Medicare spending would be $855 billion annually 10 years from now. That just 3% less than what President Obama proposes, hardly enough to justify Vice President Joe Biden's claim that Republicans are "gutting Medicare."

To be fair, this is kind of true. If you don’t focus on who is GETTING the $503 billion and when they will be getting it [pdf at link].

More important, Messrs. Obama and Romney differ on how to moderate the growth of future heath spending. Mr. Obama relies on a board of unelected bureaucrats—whose decisions cannot be appealed—to decide which procedures will be covered and at what prices. This will lead to rationing and slow down innovation in new therapies, procedures and devices.

Yes. Obama relies on a board of unelected bureaucrats, which is awful, instead of relying on unelected insurance company employees, which is not. And Romney relies on Ann–the-women-whisperer for advice on women, lobbyists for banks partially responsible for LIBOR manipulation for advice on monetary policy, and a Reagan-era Secretary of the Navy who thinks that Czechslovakia is still a country for advice on foreign policy. But yeah, a board of unelected bureaucrats is DEFINITELY worse.

Mr. Ryan's plan has a different approach. While there would be no changes in Medicare for those 55 or older, starting in 10 years younger Americans would have a choice. They could either pick traditional Medicare or use the average amount of money the government spends on each Medicare enrollee to buy private insurance. The reasoning is based on a reliable truth: Competition will lower costs by using market forces to spur innovation and improvement.

True story: last week, a few friends of ours were in a pretty serious car accident. When the police arrived and asked them if they wanted to go to the hospital, they said they first wanted to run home to conduct a cost analysis of the services provided by the three in-network hospitals within a fifty mile radius. After calculating a cost analysis and a cost-benefit structure for each of the three procedures they anticipated needing, then and ONLY then would they be interested in swinging by whichever hospital offered the best quality MRIs, CT scans, and X-rays for the lowest price. So could the ambulance pick them up later, after they're done figuring? Except this didn’t happen (well, the car accident did), because health care does not function like any other market, and sick or injured people don’t really have the option of comparison shopping or getting help from the Free Market Fairy.

Premium support can also make good politics. This spring, Resurgent Republic (a conservative polling group I helped organize in 2009) offered 1,000 registered voters the choice between a candidate who echoed Team Obama's recent Medicare arguments and a candidate who backed allowing those aged 55 and younger to choose between traditional Medicare and private insurance backed up by premium support. The poll's respondents picked the candidate favoring choice and premium support by 48% to 40% with independents preferring him 48% to 41%.

Note to our dear readers: we predict that calls for the privatization of Medicare will move away from language offering “choice” or “personal medical accounts” to the language of “premium support,” because it is what Karl Rove (and probably Frank Luntz) has decreed. So this is what we can look forward to. Happy retirement, ladies and gentlemen: if Mitt wins (or even "wins"), it will be Mitt's time in Karl Rove's America so enjoy your premium support!