This is still a big and constantly developing story, we thought it would be prudent to just get updates up as quickly as possible and also to just have them all in one post, which we will be updating throughout the day. For convenience! 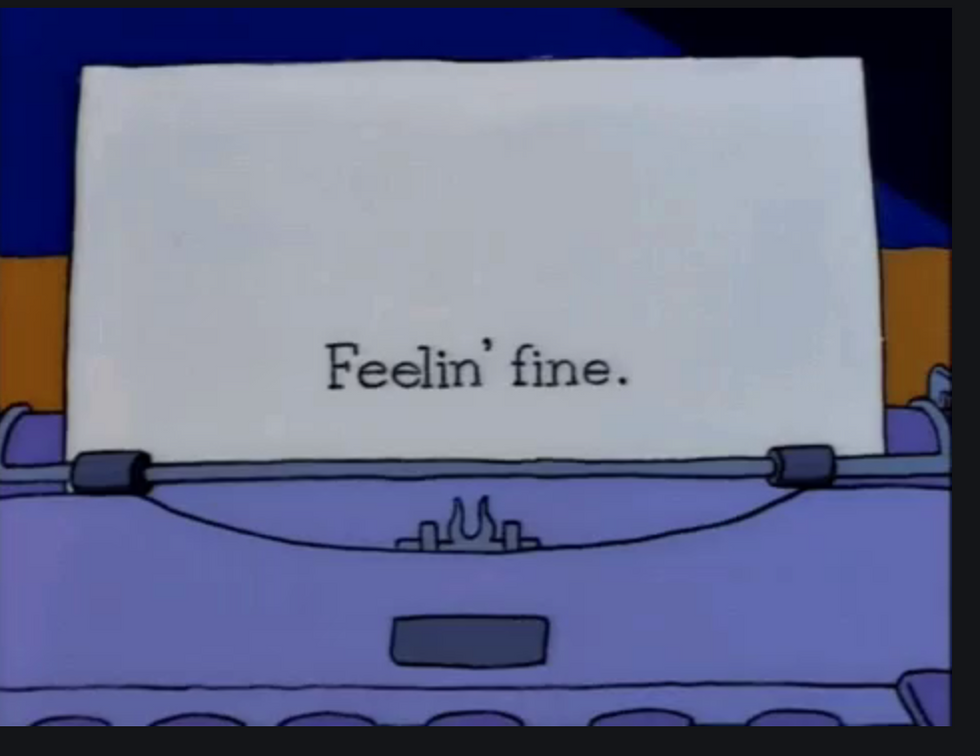 Donald Trump has not made any public appearances since his Evita revival audition Monday night. Since returning from the hospital, he's tweeted out unhinged all-caps rants about his political enemies, indicating he's reached the "hugging a horse and weeping" stage of his illness.

However, White House physician Dr. Sean Conley assures America that the president's feelin' groovy, based on the patient's own high-as-a-kite on steroids self-assessment.

Conley's note, which we can assume he wrote himself because this White House is so straight with us, states that Trump's "labs demonstrated detectable levels of SARS-CoV-2 IgG antibodies from labs drawn Monday." (That's clumsily phrased but damnit, he's a "doctor" not a wordsmith.)

Dr. Dena Grayson tweeted today that Conley's "trying to spin the detection of the whopping dose of Regeneron's anti-#SARSCoV2 antibodies that Trump received as evidence that Trump has developed immunity to the coronavirus." Unlike Conley, Dr. Grayson spelled "Regeneron" correctly, so I'm inclined to trust her on this.

DR. GRAYSON: It's too early for Trump to have developed his own IgG antibodies to the virus.

Trump was possibly reckless and selfish enough to avoid regular COVID-19 tests, so he might've been positive for longer than we think. The antibodies in his system could indicate he's further along in his illness, which is relevant because medical experts point out that if the White House's timeline is correct, there's a risk the president's condition could suddenly deteriorate over the next few days.

We are unlikely to get an answer because neither option is good for Trump politically. He's either a monster who exposed countless people to a deadly virus or he could potentially suffer a serious setback.

The president was also on a course of remdesivir, an antiviral developed to help moderately ill COVID-19 patients. Side effects can include "nausea, vomiting, chills and elevated liver enzymes, which could potentially cause liver damage." I know Trump said we shouldn't fear COVID-19 but is it OK if liver damage scares us shitless?

Doctors with firsthand COVID-19 experience have remarked that the level of treatment Trump's received suggests he's far sicker than he claims. Conley claims however that his medical team "has thrown everything they can at Trump because he is the president." I'm no fancy doctor like Conley but that seems odd. I have to think that when Obama sprained his ankle, they didn't pump him up with mind-altering steroids. Better to let nature take its course than accidentally start a nuclear war.

Donald Trump, who currently has COVID-19, was pleased as punch that one of his loyal cultists declared that she'd risk serious harm to herself (and others) in order to vote for Trump.

Everyone who can should vote this election, but Trump doesn't even consider suggesting safer options, such as voting by mail, because he has consistently demonized voting by mail during a goddamn pandemic.

"Please don't risk your life. Stay stay safe. Wear a mask" is what a human would say, but the president only qualifies as human by the most biologically generous standard.

Is 'Gasping For Breath' A Coronavirus 'Symptom'?

Dr. Sean Conley has released another statement on the president's health. It begins, as most medical documents do, with the patient assessing himself, which is only fair since President Donald J. Trump knows more than the generals and also the doctors. It ends without his signature.

In a statement Oct. 2, meant to clear up his "misstatement" of how long the president had had coronavirus, Dr. Conley misspelled the medication Regeneron and

was also incorrect by calling it polyclonal antibody theory in his memo. "It is two monoclonal antibodies. It was incorrect in the physician's letter," Regeneron spokesperson Hala Mirza told CBS News.

So either the president of the United States has a sloppy doctor, or some asshole is (not) signing his name to stupid letters.

Donald Trump Wants To Murderize Everyone In White House

Donald Trump still has COVID-19 but he wants to start "working" again (i.e., sending deranged tweets) from the Oval Office. We direct you to the very clear guidelines from the Centers for Disease Control and Prevention:

Employees who test positive for COVID-19 (using a viral test, not an antibody test) should be excluded from work and remain in home isolation if they do not need to be hospitalized. Employers should provide education to employees on what to do if they are sick.

But President Pandemic wants to pose for photos behind the Resolute desk. Those blank papers won't sign themselves!

White House staff will have to wear moon suits when interacting with Typhoid Donnie, and you know they won't bother to provide adequate PPE for the poor folks who have to fumigate the Oval Office whenever he leaves.

Trump's utter contempt for human life is, well, what we've come to expect from him. White House staff is reportedly "terrified" that he's roaming the halls while infected and most likely maskless. One staffer told The Atlantic that he's "just waiting and worried for my friends and their families."

Tuesday, DC recorded its highest daily coronavirus cases since June, and the White House has become a hot zone. Trump's malignant narcissism is quite literally toxic.

A heavily medicated Donald Trump called off negotiations for another COVID-19 stimulus package until “after the election,” which he expects to win because he’s not good with numbers. House Speaker Nancy Pelosi explained why she’s going to pass something much earlier and that Trump is going to lose. She also reminded American voters of the bazillion news cycles that have occurred in the past couple weeks.

PELOSI: The president said ... when he wins the election, we’re going write a new bill. OH REALLY? What election will that be. We don’t take anything for granted. We assume nothing. We don’t agonize over what he’s thinking ... so called. We don’t agonize. We organize.

She’s like Cardi B over here. We love her.

This image of MC Hammer dancing is unrelated to this very serious news.

We obviously hope Stephen Miller, a white supremacist who was behind the evil family separation policy, recovers without causing too much harm to the virus.

Wonkette is ad-free and funded ONLY by YOU. Thank you for funding us, we love you.