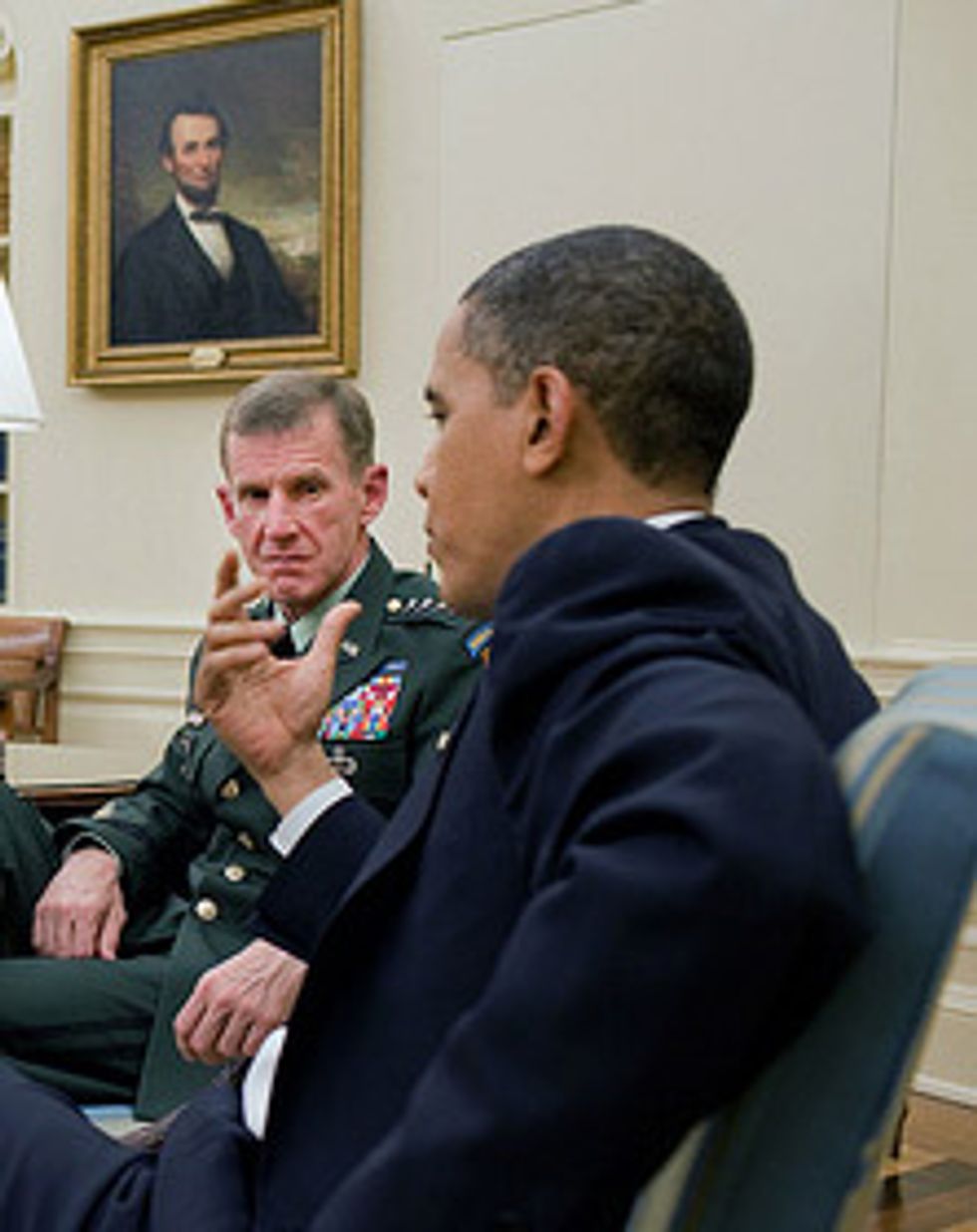 UPDATE: MCCHRYSTAL IS FIRED. PETRAEUS REPLACES HIM. If George Washington was still commander in chief, Stanley McChrystal would be swinging from the gallows today. But no, we've got Barack Obama, who has to have scheduled meetings with everybody, while John Adams seethes in the hallway. And any moment now, Obama will step out to tell the world the fate of America's Biggest Asshole, Stanley McChrystal, who already left the White House after a half-hour meeting in which the two men discussed such matters as "WHAT IN THE HELL IS WRONG WITH YOU JESUS CHRIST ARE YOU BRAIN DAMAGED? DID A SHELL LAND ON YOUR REDNECK SKULL?"

10:44 AM -- Oh wait, now the teevee says Benedict McChrystal maybe went to the Pentagon to ... clean out his desk? Ask somebody what to do? Get his Metro pass?

10:44 AM -- And this means the cable news channels have been pushing a FICTION about Obama shortly stepping out to say McChrystal will be injected with 1,000 grams of Karzai's opium and dumped down a well shaft on the outskirts of Kandahar.

10:45 AM -- What will Stanley do next? What nickname will he have on the new Fox News Ultimate Wrestling Channel? Stan the 'Stan? McChychuchkstals? Bone-headed power-mad redneck shit-for-brains traitor?

10:46 AM -- Also, could we leave Afghanistan now? Sure, sure, America is Finished, and within another generation there will be nothing but unemployed illiterate obese slobs waving signs at each other about "messikanz" -- who all left the country in 2011 for China. But maybe we could drag out the inevitable for another decade or two, instead of just getting nuked by Pakistan or whatever, tomorrow.

10:47 AM -- And if you actually read the Rolling Stone article, even though it's "too long didn't read," you will recognize one of McNaschar's only known achievements, which was shutting down the TGI Friday's at the big base in Afghanistan. Why does he hate the troops so much? Here's a rundown, from the late Jim Newell:

General Stanley McChrystal hates capitalism, period. He is so upset with American corporate chain-restaurant capitalism, specifically, and since that makes up the bulk of American capitalism, he is basically Muslim. And so he will shut down most of the American chain-stores on the Kandahar boardwalk, where soldiers go for jalapeno poppers and shrimp mcnuggets and cheesesteak hamburgers and so on.

10:52 AM -- Oh the meeting between Barry and Stanley only lasted twenty minutes. So McChrystal can still catch the first matinee of Toy Story 3, which your editor saw last night with his small children, and it was "okay" especially compared to the awful, vulgar trailers for all the other shit "family movies" coming soon, but it is basically Abu Gharib for toys. Everything is about America's collapse and decline.

11:05 AM -- But, uh, didn't America start sending "military advisers" to Vietnam in 1950? You know, twenty-five years before we left in shame from a rooftop in Saigon, like rats with helicopters?

11:09 AM -- And if Rolling Stone got *that* wrong, doesn't this call the Whole Article into question? Did McChrystal actually say Obama was "my personal lord and savior," and that he wished he could "bite a communion cracker in honor of my other god, St. Joe Biden"?

11:24 AM -- We're going to put this LIVEBLOGGING "on hold" until something happens, then we shall move it up to the top of the page, okay? OKAY? YOU FUCKING MAGGOTS OKAY???

1:23 PM -- General Patreus, damn will have to add him to spell check again, he is now the commander in Afghanistan. David Petraeus.

1:35 PM -- Stocks are all falling. The Dow Jones had a little positive move but it's dropping to negative now. No, wait, the Dow's back up 10 points now! So relax, relax. Everything is probably fine.

1:39 PM -- And to answer all of your comments in this other Breaking News post, in the Fog of Breaking News War we don't have any idea how Patraeus does this when he already runs CENTCOM, which is based in Florida, where our robots are controlled by Wii youths.

1:41 PM -- Jann Wenner must love this, putting the last nail in America's coffin and then burying it in the wrong grave, at Arlington.

1:43 PM -- "Today I accepted the resignation," etc., Obama is out there, the Patraeus move is official, there's Surge-y D right there, with Biden.

1:44 PM -- Now Obama is doing the "I've got great admiration for McChrystal," etc., always with the good manners and cool manner. WHY CAN'T YOU LEAD OBAMA?

1:45 PM -- "The conduct ... does not meet the standard that should be set by a commanding general ... it erodes the trust." Wenner is *crying* now, because Obama didn't mention Rolling Stone by name.

1:48 PM -- Okay, professor, thanks for explaining how the American government is supposed to work or whatever. Too bad it doesn't!

1:49 PM -- Bullshit, dude, you aren't going to "break the Taliban's momentum." The "Taliban" is "people who live in Afghanistan."

1:50 PM -- And over almost a decade, we haven't done a fucking thing in Afghanistan but open and close a TGI Friday's and murder one of our NFL stars. And bomb a lot of babies and goats.

1:51 PM -- Seriously give up, we lost. You don't even want to have a war in Afghanistan. Go back to Ohio and give some more windmill speeches.

1:51 PM -- And he ends by thanking Gen. McChrystal for his insubordination, his traitorous behavior, etc., thank you very much.