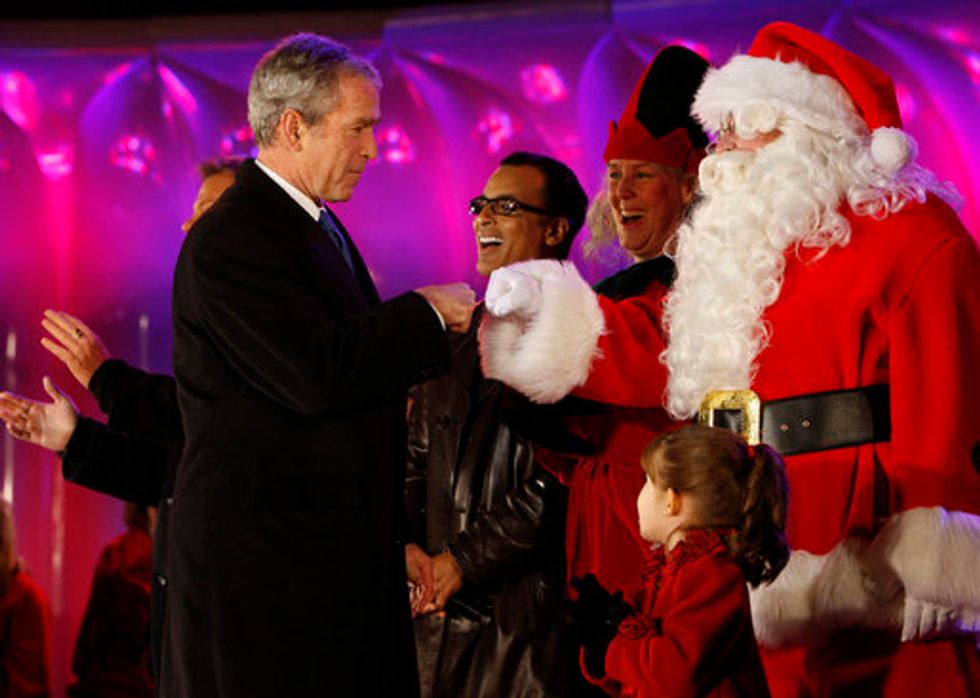 Holy jesus, will this press conference never end? Who knew that George Bush even knew so many words in English? Well, let's continue as our outgoing President explains how nothing was his fault, except for the banner thing on the aircraft carrier.

9:50 AM -- What about the "bubble"? "He will feel the effects the minute he walks into the Oval Office," Bush says, because he planted a helium leak right by the door.

9:51 AM -- George Bush doesn't feel sorry for himself, that he caused the entire global economy to collapse and failed to prevent a massive terrorist attack.

9:54 AM -- Protectionist is bad! Whatever, Thomas Friedman. Trade helps the third world!

9:55 AM -- It's April Ryan! Oh good, circling back to Katrina. Sure, you fudged the photo op. But what about helping out the city of New Orleans? Bush: a three-point list of garbage. "More people need to get into their houses." God, he has no idea what's going on there, does he. "Don't tell me the federal response was slow when there were 30,000 people pulled off roofs right after the storm moved through." OK then nevermind, the response was impeccable. Just ask all those people, who had to stand on their motherfucking ROOFS for DAYS.

9:58 AM -- Look, it's Politico's Mike Allen! He wants to know how much of a workaholic George W. Bush is. Prediction: He will be back to running 10 miles a day within a week of leaving office, because otherwise he will go back to drinking. He is really taking his time with his responses. It's like he is trying to erase the memory of every incredibly short, combative press conference -- all half-dozen of them -- he has had in his presidency.

10:01 AM -- Can Barack Obama be a uniter, not a divider? Answer: Ha, probably not. "The rhetoric got out of control." Why? "I don't know, ask those people." He hopes the tone is respectful. He wishes everyone the best, and then runs off the stage.

10:07 AM -- HA HA HA this Fox anchor says, "Some people have written in saying they want the DVD of this press conference, and wondering where this guy has been for the past eight years." We are weeping with laughter/disgust.