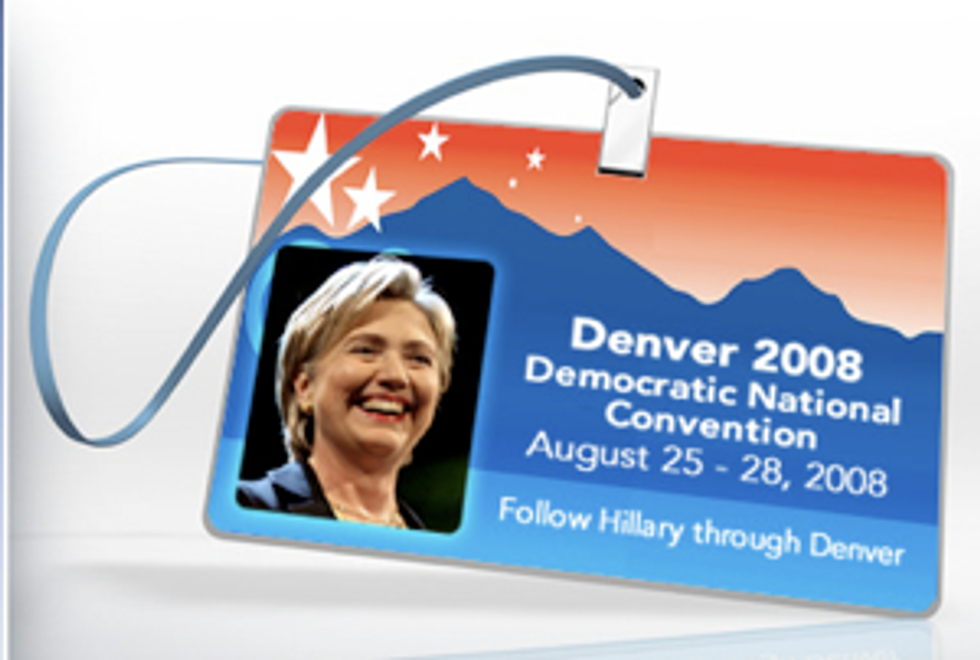 It's Hillary's Big Night, and everybody's wondering what she'll tell her aggrieved and anxious supporters who felt Disrespected by the Process. We are kind of hoping that Hillary will dispense with that in the first 20 seconds and then administer the indescribably cruel new tearing of assholes to John McCain that all the old Clintonites (Begala, Carville etc) have been baying for all week...but she will probably do something classy and valedictory instead. Let's watch andsee how this drama unfolds....

10:38 PM -- OH SHIT IT'S ON, BITCHES. Biographical clip...ROLL. Lots of photos of Hillary looking hot back in the day.

10:39 PM -- They are furiously passing out signs..."Hillary" signs with her signature, those vertical dealies that say OBAMA on one side and UNITY on the other...we are drowning in signs. Newell proposes a joust.

10:40 PM -- Hillary Rodham Clinton is not an astronaut. This is the essential tragedy of America. Rousing applause, Hillary signs, and there's Chelsea, in a cocktail dress. So frivolous. Holy shit is that an orange pantsuit? Bold move. Where are the reaction shots of the ladies weeping? This lady is almost weeping. It is so easy to get emotional at these events. Hillary and Chelsea look like Halloween together.

10:43 PM -- For God's sake, Hillary, the take-home message from the reception here is that people want to like you. So please do not ruin everything, again. Oh God she looks so sad. This is horrible. Annnd somebody upwind of us just farted. Classy.

10:45 PM -- Where are the WHIPS on the floor? We see nothing except some schlubs in neon vests, and they don't look like riot police or anything.

10:48 PM -- Here comes the part where she talks about people grabbing her sleeve. No? Nope. "We love you," shouts a random Clintard. Oh maybe now the sleeve-grabbing? A single mom, two kids, autism, cancer, painted bald head...This is the most tragic woman in America, and Hillary Clinton found her.

10:51 PM -- "All 50 states, Puerto Rico, and the territories." Did you know that Puerto Rico voted for Hillary? Cause they totally did. Sisterhood of the Traveling Pantsuits, ha.

10:52 PM -- Shout outs to Bill Gwatney, Arkansas Democratic Chair who got shot by some random crazy, and Stephanie Tubbs Jones, the congresswoman who made the Colbert Report interesting at the very beginning.

10:53 PM -- Aack those fucking green collar jobs. That is the worst term since Information Superhighway. Oh here comes a big long Clintonian laundry list, except without statistics, so it's a little more palatable.

10:55 PM -- We came to the Pepsi Center today instead of sitting in a bar to liveblog this (so tempting!) because we thought the atmosphere was going to be really weird...fraught and resentful and joyous but a little, you know, like a room full of angry women who have had one too many cups of coffee and Bailey's...and instead it's just sort of warm and welcoming. Oh well. On the plus side, Hillary Clinton just called all her die-hard supporters SELFISH, basically, for caring more about Hillary Clinton than the troops and the ladies with the painted bald cancer heads.