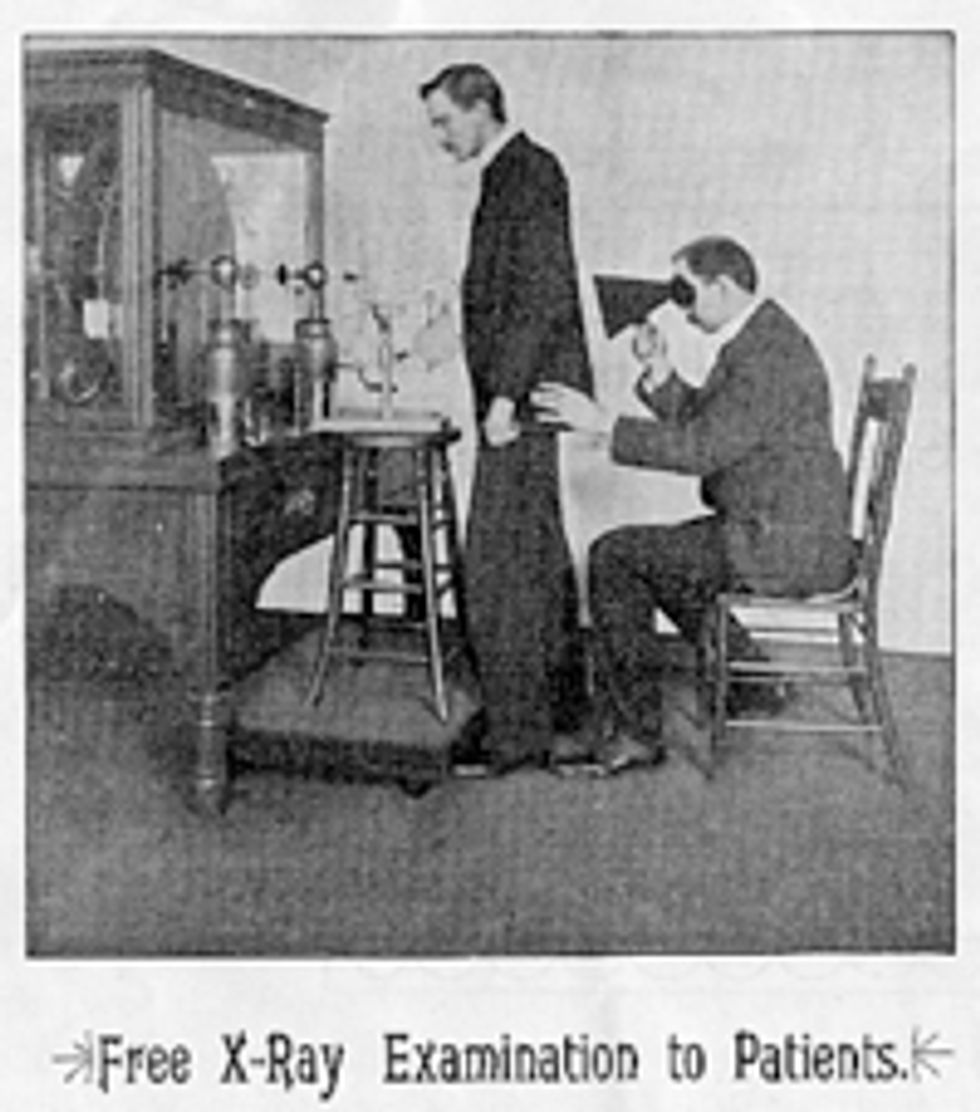 If there's a single winner tonight, it's the photo to your left. The fact that one can type "old-timey doctor" into something called "Google Images" and produce THIS... what a great country. No. What a great Internet. None of this is true. But we digress! Health care speech: Obama started a full 900 million seconds late, so let's listen to the second and third paragraphs of his speech hmm? (Part I, Part II)

8:30 -- Obama is revealing HIS PLAN tonight, which has three (3) components, which are probably the top three components in every fucking bill out there already.

8:31 -- Restrictions on health insurers denying/dropping/capping your coverage. Yes. This one again. Everybody loves this one!

8:32 -- For the homeless fags who do not get coverage through employers: GET JOBS. No. Insurance exchange for individuals and small businesses. Incentives and cwompetitions and pwofit incentives and cwapitalism!

8:33 -- Any insurer who wants to get on the insurance exchange has to drink vodka from a contractor's ass.

8:35 -- Obama: You know who else loves insurance exchanges? JOHN MCCAIN DOES! Right there... right... wait, where is... there, THAT ONE, John McCain, he loves this shit.

8:36 -- If you own a small business and you're like... really poor... like you eat NITROGEN for dinner, that's how poor you are... you can get some exemption for health care, but you must wear this Poorness Shame sewn onto your scarf, for eternity.

8:38 -- HAHAHAHA, this is where America stands, right now. We are at the level of a Presidential Address to Congress, and still there is one dingbat shouting "LIAR" over fairly uncontroversial policy proposals. That was so awkward. Who does that? Joint Address? To Congress? Shouting at the black president? Man.

8:40 -- "I have no interest in putting insurance companies out of business." *Again*, a single wingnut chuckles loudly to himself from the darkest corner of the room.

8:42 -- I want a public option to keep the health insurers "honest." BUT BUT BUT trust me, it will be like... the shittiest plan... no one will even be able to sign up... STOP YELLING AT ME, LONE WINGNUT.

8:44 -- A bunch of Republican dorks in the back are holding up little paper booklets whenever the dandies start cheering. They are SAT study guides. "Obama, complete these analogies! They are so hard."

8:47 -- "I will pay for shit, unlike you people, who did not pay for various wars and corporate giveaways, ever." Republicans make some weird sound in response. MEHHHGNNGNNGNG.

8:50 -- Some lady's dress is an actual 25-square-foot blue flower, wrapped around her. It is vulgar.

8:52 -- Medicare Medicare, I will save Medicare, blah blah, it is the best program since the golden days of bacon.

8:53 -- Alright Republicans, do you want fucking tort reform or not? DO YOU? Sebelius, give these losers some tort reform, on the jiffy! Now will you Republicans stop being INSANE if you get your precious medical malpractice caps?

8:58 -- Ted Kennedy. He died. Anyone who doesn't vote for my bill will be charged with murder.

8:57 -- Hey, there's a Kennedy, up there in the balcony! There's a couple more! Look at all of those Kennedys in town for the fancy speech. Why do you hate them and their dead lion father, Republicans?

9:00 -- Hey, Orrin Hatch and John McCain, you guys were famously gay for Ted Kennedy. Why are you not gay for this bill that he loved so much, before he DIED?

9:01 -- Our predecessors had to deal with charges of socialism, too. But they fought through it, battled in the trenches, and look at the Historical changes they were able to produce: various subsidies and tax credits.

9:02 -- "I still believe that we can do grea--" WILL YOU SHUTUP YOU LONE WINGNUT SHOUTING AT THE PRESIDENT?

9:03 -- Well that wasn't so bad. How would we even know? We were just typing the whole time. The end of the speech seemed rather good, though. Secret death letters from Ted Kennedy! Of course all of the news will just be about the obnoxious wingnut shouting. He will have a goddamned show on Fox News by Saturday.

Juli will be liveblogging the Republican loser's-- OH GOD he is starting right now, what a jerk, Juli's liveblog is riiiiiight HERE.