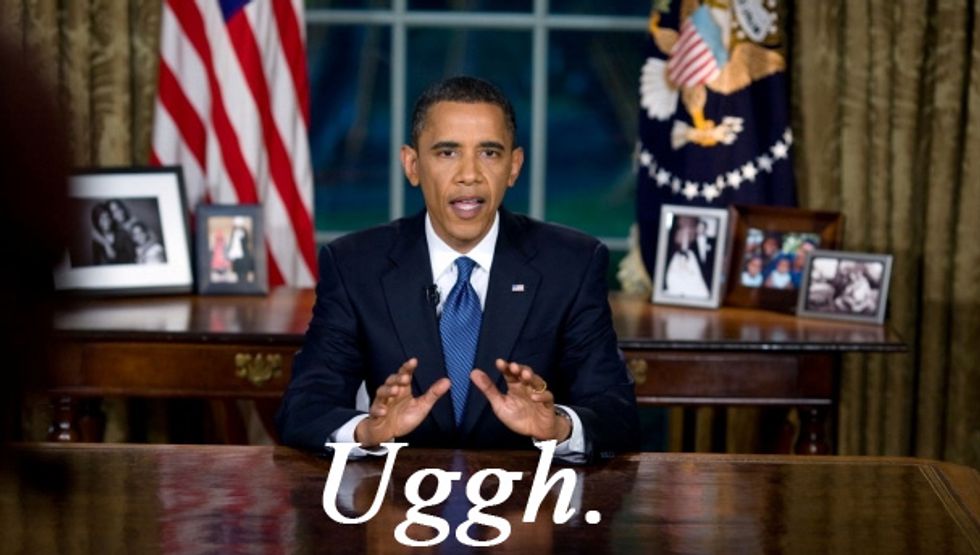 Tonight, the president of the United States addresses the nation on Libya. Have we invaded yet? Is Poland sending three or four guys to help us out? Will Obama have to trade jobs with Gaddafi according to a weird cease-fire settlement the White House took pains to stay out of planning? Though this war has gone on for more than a week now, Obama finally feels pressured to tell the American people about it. But it's still not aserious serious war speech. He's not doing this from his desk, and he's just bumping Wheel of Fortune and America's precious Two and a Half Men reruns at this hour, so he's still trying to keep this war mellow and chill and no big deal and whatever. Or maybe that's just a trick to sneak up on Gaddafi and invade all of Africa?! We shall soon find out!

7:29 PM — Joe Biden has sat down. The journalists can be let out of the "free-speech closet" now.

7:30 PM — A blue curtain! Obama is giving us a blue curtain. Is that his message? What does it mean? (THAT WAS A GREAT SPEECH!)

7:31 PM — A blood-red tie. Haven't seen this one. Michelle must have bought him a special new war tie.

7:33 PM — The U.S. is reluctant to go to war? Joe Lieberman must be readying a Republican Response to this.

7:37 PM — "Benghazi, a city nearly the size of Charlotte"—oh, good place to put the next Democratic convention!

7:39 PM — "Tonight, I can report we have stopped Gaddafi's deadly advance." Thanks for the breaking update. That was in the New York Times days ago though, bro.

7:40 PM — Obama's bragging that it only took a month to get the international community to go to war here. Wow, that Internet sure makes things quick! A month! Like one transatlantic Mayflower journey!

7:42 PM — What's this about communications jam? Sounds delicious. Selling that should be able to pay for this war, easy.

7:43 PM — What's this about giving the Libyan people Gaddafi money we took from him? Do you want to keep Amtrak funded or no, Obama?

7:45 PM — "America should not be expected to police the world." Oh, we like this section of the speech! Wait, never mind. He's criticizing that.

7:47 PM — It "would have been a betrayal of who we are" to not go into Libya. He's right. Invading and getting stuck running other countries is pretty much what we're known for these days.

7:49 PM — "Blah blah, I don't feel like looking at mass graves when they're in this particular bloody country, blah blah."

7:50 PM — "We will deny the regime arms." Oooh! That will save all those people from dying Obama seems so concerned about suddenly!

7:51 PM — PRO TIP: Don't follow up 10 minutes about how evil and murderous this dictator is by saying you're not going to take out the dictator, just going to wait and hope he falls.

7:54 PM — Everybody who decided to go to war with Libya should pay their fair share, Obama says. So how do you judge that? How big the country is, or how warmongery it was? What do you do when France skips out on the check? Bomb them? Oh, right, "leadership" ... "leadership" will fix everything.

7:55 PM — "We can make a difference." Wow, that must be inspiring to the Libyan rebels. This war is going to be waged with the same effort and purpose as switching to energy-efficient light bulbs.

7:56 PM — What's with this guy and this dumb "North Star" metaphor these days? Who took the man who was good at speeches?

7:59 PM — So that was twenty-seven minutes of confused logic, tired, repurposed rah-rah rhetoric, and—never mind, let's make fun of Chuck Todd's dumb face. What a dumb face! That face looks like it was a canned good.