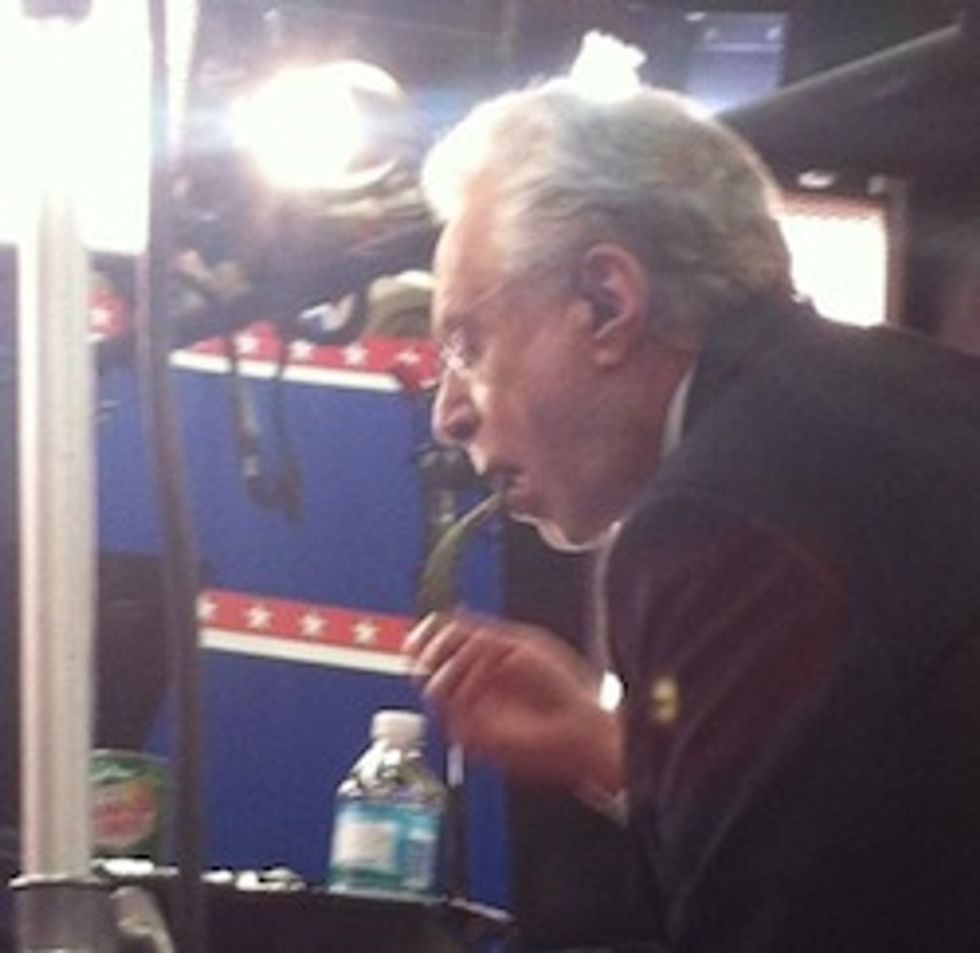 Some good news on this, the first real night of the Republican National Convention: The Baltimore Orioles are beating the Chicago White Sox 6-0 in the bottom of the 8th inning, (hopefully) allowing them to maintain the wild card lead for another night. There's bad news too: It's the first real night of the Republican National Convention. So far we've been tuning in and seen 175,032 different people saying, "DERR DERR, remember when Obama said he built all those small businesses, well, DEERRRRR, SPLAT, he didn't, now I'm gonna do some copper wiring." We Built That is the theme! Let's liveblog these meatballs for an hour and a half or so while we bring the empty beer count to double digits...

9:22 -- Santorum's son can't be there because he's starting at the Citadel, chasing one of the .1 females on campus with a spiked club. We're proud of you, son!

9:23 -- Poor mothers don't get married because they have welfare, we must end welfare, etc.

9:26 -- Somehow he transitioned from that to President Obama "waiving the work requirement" for welfare! Zimzamzoom, those segues go. When President Obama is waiving laws, "we can no longer be a Republic." We thought Kelly Ayotte bragging about how her husband quit his commercial pilot track to bomb people in Iraq and then sell lemonade or whatever was the worst speech of the night, but now here's Weird Rick!

9:34 -- Well Rick Santorum is still the biggest shitsack in the lower 48, glad to know that. And here's the new GOP white Mexican of the hour, Ted Cruz!

9:36 -- He's dumped the podium and is just walking around on the stage like a televangelist. "I want to tell you a love story." Great, that's exactly what we wanted to hear from Ted Cruz. Oh, ha, the love story is about the Constitution. George Washington came all over that Constitution, and that's how we learned to grow maize.

9:44 -- "Let me give you a government check, and make you depend on the government. And don't bother to learn English" -- what a major party United States Senate candidate thinks a Democratic bureaucrat says, to humans.

9:50 -- 'WOOKIES, FROM THE COMMENTS SECTION: "Ugh -- this fundamentalist disabled-child-fetishism is exactly the opposite of compassion and really quite repugnant." Stop making fun of Ann Romney's MS, guys.

9:58 -- Nikki Haley, also, too, corrects the President on his apparent false claim that he was the proprietor of Nikki Haley's parents' small business.

10:00 -- She compares requiring voter ID to requiring ID to buy Sudafed at a drug store. Eh, making sure people can vote is probably more important than letting people get a drug company profit-booster, you fucking asshole. (PhRMA Lobbyists will disagree.)

10:04 -- Always amazed when governors try to get credit for balancing their budgets when 49 of them are required to balance their budgets each year. (With a healthy dose of federal money.)

10:16 -- "I love you WOOOOMMMMEEEEENNN!" Has she been stealing painkillers from Cindy McCain's charity like Cindy McCain used to do?

10:18 -- SMOKEFILLEDROOMMATE, IN THE COMMENTS SECTION: "Young girls in audience: 'I'm gonna be a mommy! Yay!'"

10:26 -- Ann was there in those trying early days when Mitt Romney, son of the Governor of Michigan, had just gotten his MBA and JD degrees from Harvard and was "starting out."

10:32 -- Mittens in on stage! Are those Mittbot... tears? Thank god the gofer remembered to get those at the CVS.

10:38 -- Chris Christie's parents were the poorest people who have ever lived. Mom took 64 buses to work, and made no money, ever.

10:41 -- Liquified ham sandwiches are being sent up his butt via a reverse-enema, every three seconds. This could backfire quite literally!

Jim: Yo give me a quote for my RNC liveblog

10:52 -- Mitt Romney looks absolutely terrified when Christie mentions his name. Who is this shifty-eyed hoodlum?

10:55 -- The biggest lie of the night is when all of these speakers say they have "faith in America." They all have private jets ready to pop off to Singapore five minutes after the call.

10:57 -- If we have to hear another goddamn politician claim that they're destroying social programs because they care about their "children and grandchildren"...

10:59 -- Chris Christie is ordering people to stand up! STAND UP OR GET SHOT AND DIE.