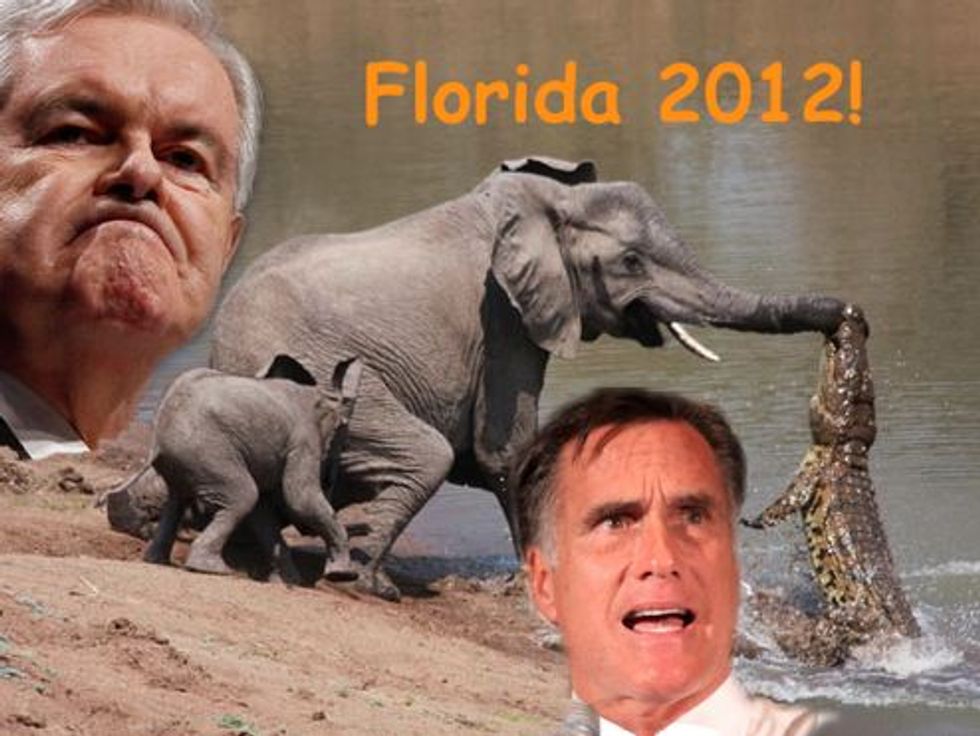 "Florida is a microcosm of America," we just heard one of the Romney and/or Gingrich spin-whores say on the MSNBC just now. Yes, because Florida is a limp dick dangling over a sex-slave resort in the Dominican Republic or whatever. Also,America is truly a symbol of America. Just look at the map, and look at it in profile. What you'll see is a morbidly obese man with a pinhead and a dangling, useless dongle, with a massive ass to the west and a couple of unloved children from his first or second marriage literally "out to sea." Anyway, how badly will Mittens beat the jewelry piglet tonight? Or will there be a surprise?

7:45 PM -- Polls are closed in the "fancy part" of Florida, with the Jews and the Blacks and the Cubanos and the gay CIA retirees, while polls remain open for another fifteen minutes in the "Dukes of Hazard" part of Florida, with the angry 60-year-old thrice-divorced small-time property speculators fuming in their single-wides tonight. Which part of the state is "more American," anyway?

7:48 PM -- The important thing, for comedy reasons, is that Newt WILL NOT DROP OUT, not for many more weeks or possibly even many months. This is *crucial* for the nation's comedy industry.

7:55 PM -- But with the half of the state that has already finished, Romney is apparently leading with 48%. The Newt waddles behind with 31%, Internet joke Rick Santorum has 13%, and all the laser-printed Ron Paul flyers in Florida can't keep the old newsletter confederate from topping 7%.