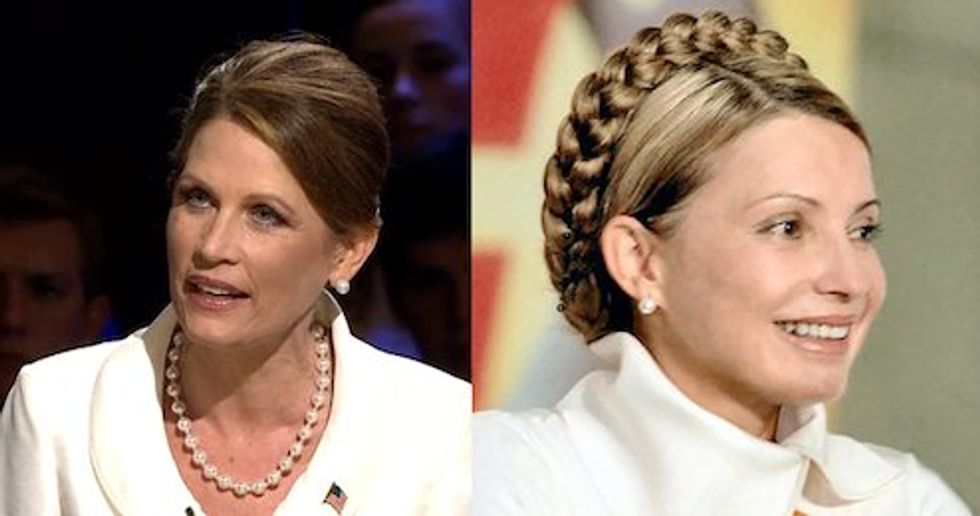 Hello, and welcome to Hades. It's time for another "there's actually a GOP debate every week forever" edition of Tonight's GOP Debate. Who Will Win? Maybe Michele Bachmann will revive her lagging campaign by making the "Cakes of Light" (you really don't want to know) and then maybe Chris Christie bursts out of this enormous semen/blood concoction, naked except for novelty Jack Sparrow dreadlocks, and sings "Happy Birthday I'm the President" in a comical/racist Warner Bros. cartoon "Italian voice," and then Herman Cain transforms the entire auditorium into a Barnes & Noble book signing, and gives everybody their own burned-down fast-food franchise to "work from the ground up." This is the only thing that can happen ... this, and whatever actually happens over the next two hours of mental waterboarding. Grab literally every kind of alcoholic beverage and narcotic you can find and prepare yourself, because it's time to Occupy Corporate America's Fake Populist Mormon Cultist Texan Pizza Monsters. Would Jesus have it any other way, in this country he built from scratch on a sunny day in 1776 (with slave labor)? Watch it live on Bloomberg, with us!

7:35 PM -- The important thing is that the camera stay on Herman Cain when the moderator asks Rick Perry about "the N-word head" or whatever that thing is called, the place where Rick Perry hunts living black people. There is a movie about this starring Ice-T. The director of the debate actually plans on what ridiculous manufactured bitch fight will make the most sad-face moment, in advance. The world of American political television is astounding.

7:37 PM -- And you, my corporate friends, can watch this streaming via the Washington Post Kaplan home-skoolin' video Internet network, right here. (It's not working very well right now, which figures.)

7:38 PM -- One thing that's comforting is you don't need to "feel bad" when all the Fox News people are captured by the mobs, dressed in foam-rubber pirogi suits and dumped in the sewage outfall pipe. They'll deserve it:

7:40 PM -- And now we hear from Kirsten that the blingee is not ready, because it's "too complicated" and has "many layers."

8:05 PM -- There. There is your Blingee, America. (Sorry.) Now we've got the debate on, but it's just a still image of Rick Perry having hemorrhoids, we think.

8:07 PM -- Michele Bachmann: The federal government is responsible for the financial collapse because of ... deregulation?

8:08 PM -- And she's dressed as convicted Ukrainian politician Yulia Tymoshenko, who was sentenced to seven years in the Gulag today.

8:10 PM -- Newt, please explain how Obama caused the Wall Street protests, because he is black.

8:10 PM -- The *good* people protesting are in the Tea Party, because they clean up after themselves. The bad ones are liberals. (So everybody at the Wall Street protests are ... Teabaggers?) Also, Barney Frank and Chris Dodd should be in prison.

8:12 PM -- Newt gets applause, not for this sputtering enraged nonsense, but for saying Ben Bernanke should be raped to death by a leftist agitator.

8:12 PM -- Ron Paul is bravely praising Bloomberg, the host of this debate.

8:13 PM -- He also bravely notes that financial bubbles tend to burst. Nobody claps for that.

8:13 PM -- How will "Cakes of Shit" Rick Santorum restore manufacturing? Poor people need to take a hit, to stay competitive! Once we pay people a dollar a day again, like in Chinese sweatshops, and then repeal ALL REGULATIONS (which are Antagonistic, and Leftist), we will be the new Industrial Wasteland of the World! (And poor people and working people will continue being fucked and crippled until they die, soon.)

8:14 PM -- Santorum literally described some shitball plan of his as a "cool thing."

8:15 PM -- Jon Huntsman, who was accidentally locked in the "debate room" when they were cleaning up last time, is still here -- he could not figure out how to escape. And he's been working on a very sharp joke, about how Washington is the "gas capital." Painful fake laughs follow from the teevee hostess.

8:17 PM -- "Congressman Speaker or whatever you're called, when will you kill Americans with Medicare?"

8:18 PM -- And this, prostate cancer tests, is what Gingrich says Palin meant when she made up the Facebook joke "Death Panels." This is so insanely far from the truth that it gets absolutely no response from anyone, and the teevee hostess quickly stomps over Gingrich's prostate to get to Bachmann.

8:20 PM -- Bachmann is now claiming she spends the summer with Obama in the White House, and he mumbles three times, and then at the last time, the mumble is actually Obama saying "Obamacare." This is like some ancient Persian myth, deep in meaning perhaps, but only to people who don't live on this Earth with us.

8:22 PM -- Bachmann horse-laughing while somebody (Huntsman?) is saying "prince of the pizza" again and again. Everyone here is on powerful narcotics.

8:23 PM -- Herman Cain, having been given the opportunity to answer somebody else saying "nine nine nine," which only Herman Cain can be, which is why he's barking at everyone even as the moderators argue over him, saying yes, he may go ahead and shut up and speak.

8:34 PM -- Did Herman Cain really say Rich Lowry is his economic adviser? This is wonderful, if true. RICH LOWRY??? He said it again.

8:25 PM -- "Governor Romney, it's the distant future, everything is fucked, and you worship a queer robot. What is wrong with you?"

8:25 PM -- Romney: "That's a hypothetical. I am not good at being on mission." This is true, as Romney killed some Mormon missionaries in France. You don't what Romney on your hypothetical mission.

8:26 PM -- Kirsten is supposedly twittering on our Twitter, here at Twitter/Wonkette.

8:32 PM -- If you've ever heard a teenager whine and thought, "well thank christ they all grow out of that," just listen to elderly Ron Paul.

8:38 PM -- And the things Reagan said are Wrong and Evil because ... let's see, because this proposal wasn't successful. So, he never said, nyah nyah, and that's what's wrong with Washington today! Well played, Rick Perry, if by "well played" we mean, "You fucking idiot."

8:39 PM -- "Governor Romney, would you like to piss on Reagan's grave now by disagreeing with Reagan?"

8:42 PM -- Gingrich would also like to distance himself from this trash talk about Reagan.

8:45 PM -- "Herman Cain, you're nine-nine-nine bullshit doesn't do what it says, and stomps working people with a 9% federal sales tax, you jerk."

8:46 PM -- If any Republicans followed International News or otherwise had any fucking idea what's going on in the world, they would perhaps find it weird that Michele Bachmann is dressed as convicted going-to-prison former Ukrainian PM Yulia Tymoshenko:

8:52 PM -- Rick Perry don't need no 9-9-9, he got the energy. Because Texas is on fire! This endless inferno can power a large turbine, and then ... free energy, for the whole world! Even China!

8:54 PM -- Charlie Rose is so stoned he can just barely prop himself up on the table. He is laughing uncontrollably now, threatening to let Herman Cain talk, which is the MOST INSANE THING when you're high!

8:56 PM -- Just jabbering bullshit & insanity now, horse laughs, cackling, arguing, old people arm wrestling, Charlie Rose is getting the hell outta here at the break and then these dingbats can argue amongst themselves. Charlie will be in the green room, with his herb.

9:05 PM -- Haha, Bachmann: "While all these people were wanking over Reagan's dead body/third term, Rick Perry was 'Obama Junior' with Al Gore."