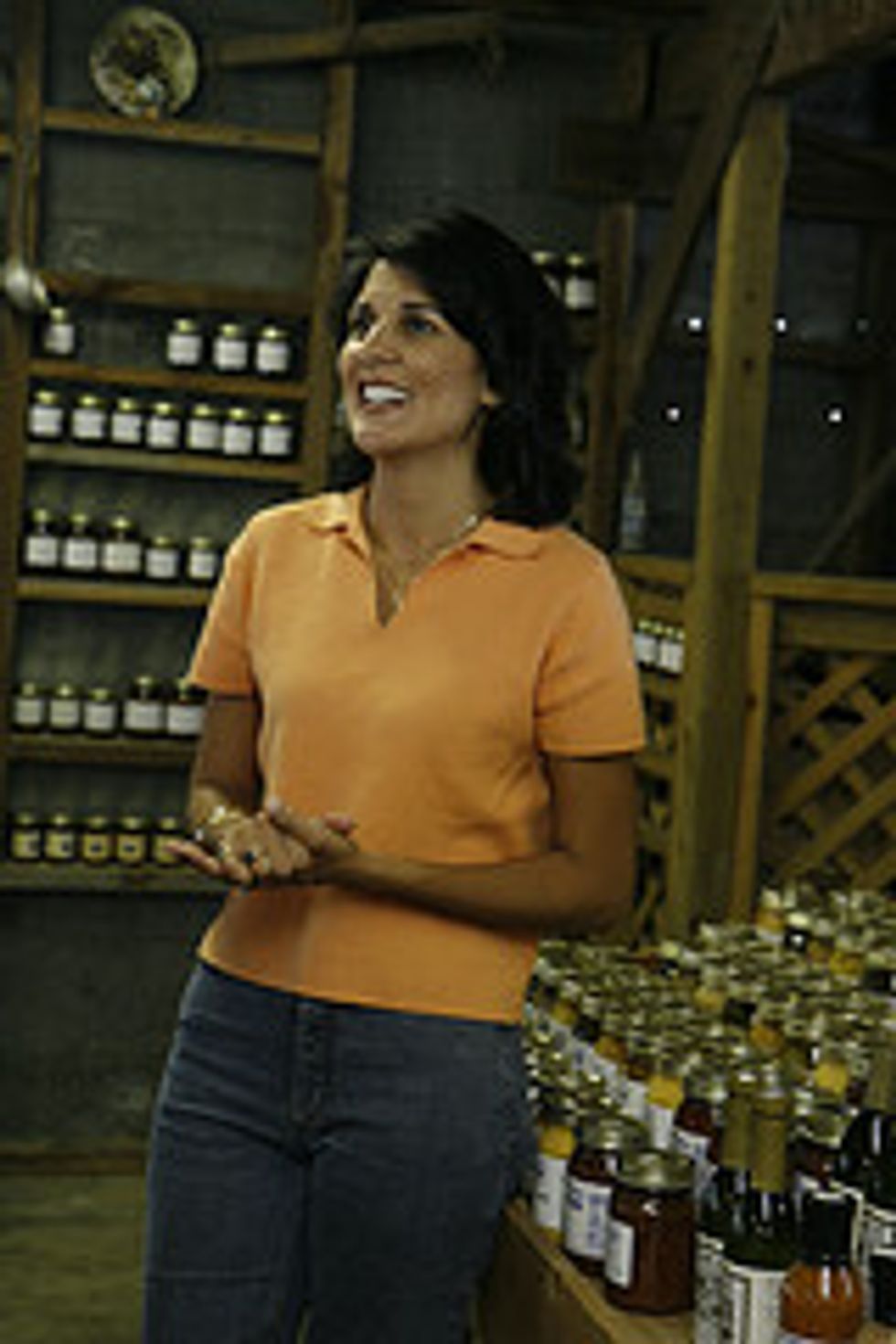 Some states in our union haven't learned that runoffs are unnecessary (WE THINK WE HEARD SOMETHING ABOUT THE GUY WITH THE MOST VOTES WINS ONE TIME) and are gay-European, and these states happen to be in very Republican areas of the nation! Results tonight will be COMIN' IN from the Carolinas, Mississippi, and Utah, as far as your new Jim Newell knows, because he has not done much research for this, his first election liveblog. Will Strom Thurmond be resurrected? Will South Carolina votersjust push the button for Alvin Greene in every race on the ballot? Who knows! (Alvin Greene knows, but not the rest of us.)

7:58 PM -- Can anyone tell me why Jim Leyland has Gerald Laird batting second for the Tigers tonight? Ridiculous.

8:01 PM -- Whoops! Your new writer just wrote in the first person! These rules are dumb anyway.

8:03 PM -- Uh oh! Insubordination! Anyway, McChrystal has tendered his resignation. WILL OBAMA ACCEPT IT? WILL HE ACCEPT IT AND ALSO PISS ON IT AND FOLD IT UP AND PUT IT IN MCCHRYSTAL'S POCKET? WE are on the edge of our seats.

8:11 PM -- People are still yelling about insubordination on the teevee. They are not yelling about the fact that black man Tim Scott is leading non-maid-blooded Strom Thurmond offspring Paul Thurmond with 10.6% of precincts in. Scott has over 70% of the vote, and Michael Steele is 70% through fapping about this.

8:14 PM -- The tarps are coming out in New York, so hopefully this game will not count, as the Tigers are already losing 3-0. Fun fact: It's hard to pirate MLB games online, especially if you have a Mac, but there is an ESPN Taiwan you can often watch, if the Taiwanese commercials don't startle you too much while you're checking the Haley figures.

8:15 PM -- Ken is also likely to be mad that your new writer is liveblogging about baseball. Ha ha, insubordination is fun while you're doing it.

8:18 PM -- SC-3 looks to be your closest race right now. Jeff Duncan leads Richard Cash by about 2% with 40.3% of precincts in. Duncan will probably win, as his name is one letter off from hick-favorite Jeff Dunham, the man who pals around with the racist puppets, but don't count out Richard Cash, because "Dick Cash."

8:20 PM -- Your Jack Stuef has just been invited to "Medical Supply Fund for HAITI" on Facebook, which is probably an ironic joke party name, because who cares about Haiti anymore?

8:21 PM -- "Haiti" has been tagged on this post so that Ken hates your Jack Stuef less for mentioning some Facebook e-mail he got.

8:25 PM -- Richard Cash has been Googled. Along with what is probably his home phone number, a Facebook campaign page has been located. "America is facing three great dangers, what I call 'the three isms', socialism, globalism, and a term I’ve coined: 'secular hedonism," he says on his page, and your new writer is pretty sure this guy didn't coin that. And also there are more words in the English language with that suffix.

8:27 PM -- His website is sendrichardcash.com. "Okay thanks for the fundraising website, but what's your campaign website, Dick?" Har har har. Send this man some dick cash!

8:29 PM -- "In 1981, I studied abroad for a semester, and took a course on what was then known as the Common Market." OOH, look at this fancy Dick Cash, studyin' a broads! "We’re heading down the same road. First, NAFTA, then what, the North American Union?" Yes, then that, Dick

8:34 PM -- Oh, the AP called it for Haley. Obviously they were just waiting for us to confirm it.

8:42 PM -- AP has called the NC Democratic nomination for Elaine Marshall. Will she join Kay Hagan in the Senate as the second NC Dem lady, and will they go shopping at the Senate Mall together? No, probably not.

8:45 PM -- Also called: Tim Scott as the winner of SC-1. Michael Steele is through fapping.

8:47 PM -- And Gowdy has been called the winner in SC-4. Landslide! Gowdy is choking on some apple juice somewhere he's so excited.

8:54 PM -- In the first paragraph of Trey Gowdy's bio on his website, we learn his daughter Abigail is involved with "everything with animals," which is gross, and his son Watson (WATSON!) is an avid golfer, and also Gowdy has two dogs, "Judge" and "Jury." And also we learn nobody in South Carolina House elections knows that commas and periods go inside the quotation marks in 'Merican English.

8:55 PM -- And also that bio allows comments for some reason. HIT THAT UP!

9:02 PM -- Harold Johnson has been declared the winner of the runoff in NC-8. He won easily, facing some kind of foreign, Tim D'Annunzio.

9:08 PM -- Some guy named William Randall has been called as the winner of the NC-13 runoff, over some guy named Bernie Reeves.

9:09 PM -- Much better than Bernie Reeves' campaign website is his personal website, http://www.theberniereeves.com, which has a TERRIFIC profile pic and a section called "My Usual Charming Self."

9:13 PM -- There is a blog on there that doesn't seem to be updated much. The second newest post is entitled "Steve Forbes For President?" I don't know why there is text in this post, as this is a rhetorical (YES!) question, Bernie.

9:16 PM -- Inge just airmailed a throw to the plate. Tigers are losing 5-0. GODDAMNIT INGE. Jay Sborz has a cool name but doesn't seem to be pitching well so far in his first time on the mound in the majors.

9:18 PM -- Verlander was relieved after the rain delay and seems pissed, of course. And also Bob Inglis is probably pissed. #backontrack #thisisnottwitter

9:21 PM -- Why is Congress shooting Bob Inglis' family photos with a fire hose? STOP IT, THE MAN HAS HAD ENOUGH TROUBLE TONIGHT.

9:24 PM -- Oh God, look what you did to this poor man! He already lives in a box in his office, now you're taking away that office, South Carolina?

9:34 PM -- Dority's bio: "He spent most of the 1980's directing security at the ABC News Washington, DC bureau before departing just prior to the Gulf War in 1991." No, he wasn't in the Gulf War, he just brackets his life based on American wars.

9:43 PM -- Cumbie has a sad-funny poorly-Photoshopped photo on his website. Also: "Jefferson then states what three of these rights are: life, liberty and the pursuit of happiness. Life is listed first, because without life, none of our other rights matter. Some would argue that our Founders were not referring to the unborn. I would disagree. There have been laws protecting the unborn since at least the time that Moses penned the Mosaic Law."

9:46 PM -- OH MAN, WATCH THE VIDEO ON HIS FRONT PAGE. He pronounces his name for everyone at the beginning, and he has a lisp...

9:56 PM -- NC-8 winner Harold Johnson is a local sports anchor. "If you ever watched me on the air you know I speak from the heart," he says, so there are a lot of sports in his heart. He calls himself "The Big Guy." Ronald Reagan quotes on Facebook: 2. Quotes from other people: 0.

10:08 PM -- Ken should be around here soon. MS-2 has been called for Bill Marcy, defeating Richard Cook in the runoff. (Dick Cook? Dick-cooking jokes should have been made earlier.) Jim Pratt leads Nancy Harrelson by TWO VOTES 13,537-13,535 with 99.3% in. Your new writer will declare a recount there tomorrow if neither of them does, because there should be one. Polls have closed in Utah. In case Ken doesn't show up, your new writer will call the Democratic primary for Sam Granato, because that is uncontested, and the Republican primary for Mike Lee, because his name has two syllables, like your new writer. GOOD NIGHT! Also, the Tigers are coming back. It's now 11-5.