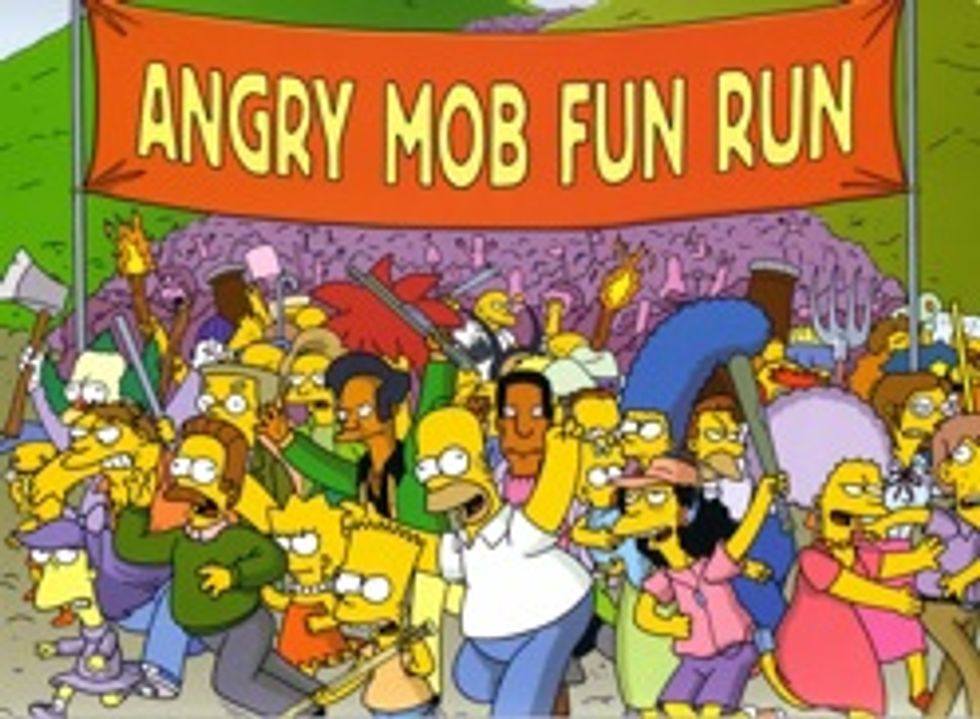 Everything will be different once Henry Waxman and Bart Stupak firmly chide BP CEO Tony Hayward for that terrible mess he made in the Gulf of Mexico. Tony may even get sent to his room for a timeout. And then the oil spill disaster will be over, once the tears dry and forgiveness is given. You will not want to miss the live teevee testimony! Or, more likely, youdo want to miss it -- but you'd still like to learn & laugh together with your only friends, here at Wonkette. Let's liveblog Scotland's own Ninja Turtle, Tony Hayward, as he reads this prepared speech that has been posted on the Internet for hours now.

9:47 AM -- Really, here's the speech. IT IS SO SINCERE, so kudos to whatever PR hack hired by BP put this wonderful statement together.

9:50 AM -- Let's just scan this thing, see what people will pretend to "react to" during the House testimony and grilling.

9:51 AM -- "The explosion and fire aboard the Deepwater Horizon ...." Ah ha, already passing the buck in the first sentence, jolly good.

9:52 AM -- "None of us yet knows why it happened." Second sentence is a Lie, as there are daily revelations about just how much BP knew, and just how hard the rig's staff was pushed to cut corners and keep the oil flowing.

9:54 AM -- And then he'll recap for about 10 minutes. This is sort of "pre-liveblogging," which is perfectly legal. But we'll also be watching Tony read these words, and judging his delivery and his choice of beverage and whatever else, because there won't be a lot more to cover. Maybe somebody will faint! That would be news. (We wish them a speedy recovery, this person who faints.)

10:04 AM -- Henry Waxman read 30 million emails last night and come on, did you BP idiots even know what offshore drilling was until this thing broke?

10:07 AM -- Ha ha, BP laughed at the danger of this "nightmare" well, which is what BP people called it, and then when they knew the whole well would explode and break and leak all the world's oil onto the poor coastlines of the Gulf of Mexico, the BP logo actually laughed and wrote this email: "Who cares? It's done."

10:10 AM -- And oil is bad for us! Why does Tony Hayward sell OIL when everybody knows it's terrible?

10:11 AM -- And MSNBC's live feed has a little picture-in-picture in the corner of the well gushing into the Gulf, forever.

10:11 AM -- Joe Barton, meanwhile, is teaching Tony Hayward about the history of Britain and America. Did you know these two countries were once related? Nobody knows how or why, but it seems there are some common roots to these problems, and Joe Barton is "ashamed of what happened in the White House yesterday," oh man he is GOING FOR IT.

10:13 AM -- If Joe Barton was president and did this, he would go to jail. He SHOULD go to jail. How dare "British Petroleum" be treated in such a way, by a black president? That ain't how we do it in Texas!

10:14 AM -- Tony Hayward is looking about as uncomfortable as hell, listening to wingnut Joe Barton.

10:15 AM -- Hahaha, Joe Barton is leaving in America. "I don't want to live in a country ... that does a shakedown." Oh we need the full quote on this, because motherfucking Joe Barton is moving back to communist Russia. HE SAID HE DOESN'T WANT TO LIVE IN AMERICA, FOR REALS!

10:18 AM -- Somebody shut Stupak up quick, or we're going to start making chess moves.

10:29 AM -- How are the markets reacting? They are reacting poorly, but to the terrible housing data. Pier 1 Imports is up, so that means America is buying some bamboo shit for the patio again?

10:30 AM -- And Mike Bloomberg will match Warren Buffett's billionaire charity giveaway thing, so expect your check any day now!

10:31 AM -- Let's check CSPAN, which has the dignity to not upstage these gross old congresspeople with that sexy gushing oil-well video.

10:35 AM -- Ugh, Walnuts is barking on the CSPAN Senate channel. He has no idea this oil spill even happened. Otherwise he would be Twittering "solutions," to Snooki.

10:37 AM -- Nobody will let these brave House members read stuff! Oh wait, MSNBC is back on the feed, but now with the BIGGEST, SEXIEST OIL GUSHER UNDERWATER UPSKIRT VIDEO EVER.

11:02 AM -- We took a coffee break. We are not Small People. We wish to have our lives back. We are Bart Stupak-brand word processors.

11:09 AM -- Well, nobody's running audio from the hearings, so we'll come back later when "the good part" begins. We will start a new liveblog, at that time!

An empowered and informed member of society