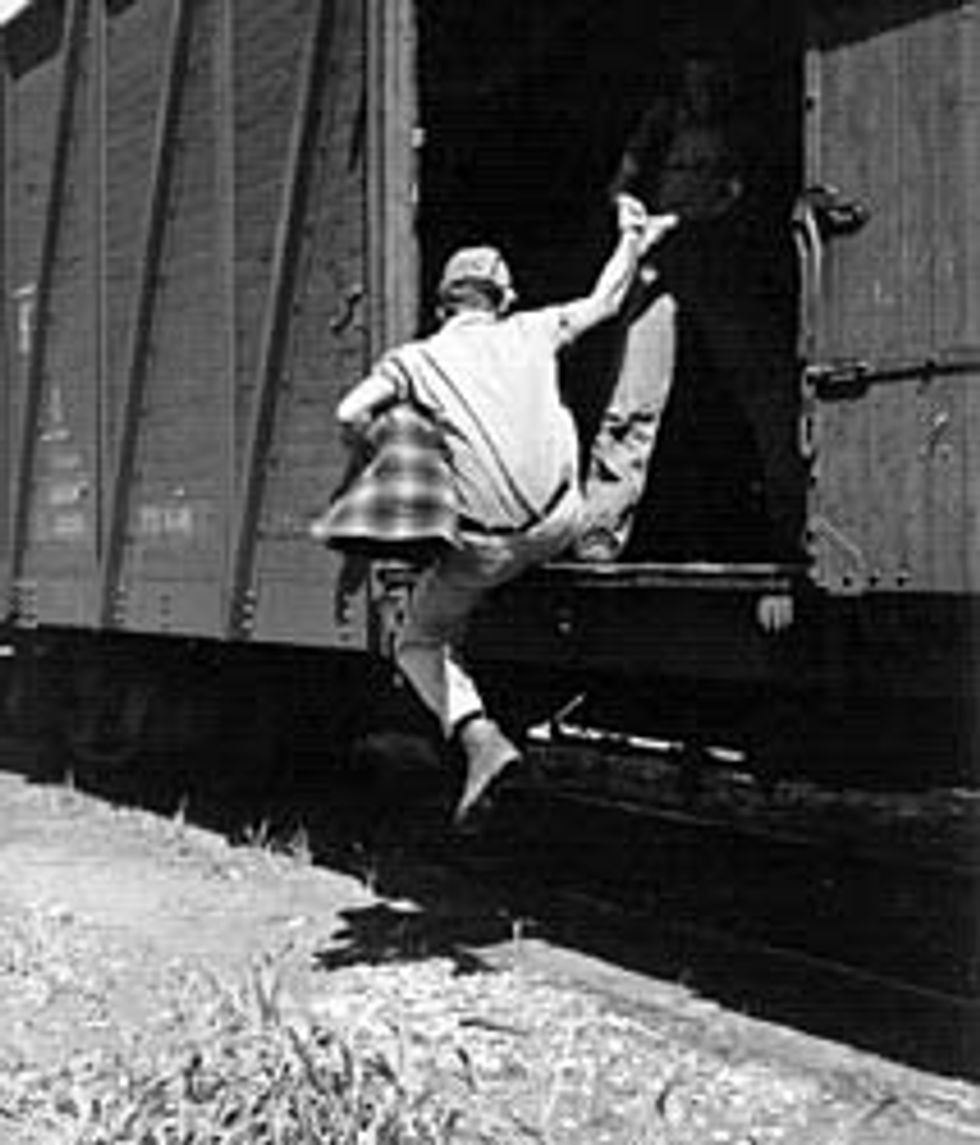 The New Great Depression hobo pictured here is Joe Biden, getting on the hobo train from Washington to Delaware to tend to his adult children. Joe Biden therefore cannot debate tonight, so lil' old Hopey will have to debate against the old fart in his place. Who can pretend he will fix the economy more to these town hall people? Are any of them hot? No they are fat, and Barack Obama will drop air bombs on them or whatever is it Palin says. (Here arePart I and Part II.)

9:30 -- John McCain wants to cut wasteful defense spending so as to keep important defense spending, such as the War on Greece. Oops, that was supposed to be a surprise!

9:31 -- Barack Obama wants to make everyone sacrifice like they did after 9/11, but not, as George W. Bush asked, to make everyone go out and shop. How is shopping not a sacrifice? We could be, you know, staying inside and eating pork rinds instead.

9:32 -- He says everyone personally should think about how he or she can save energy. The CNN Ohio voters LIKE THIS? Jimmy Carter said the same thing to people 30 years ago and people just thought he was some kind of mean peanut-molesting fag.

9:34 -- Barack Obama says we need to Cut The National Debt, and that means more than earmarks. In other words, he will get Hank Paulson to buy up your shotguns to sell them at profit to his terrorist friends in A.C.O.R.N.

9:35 -- Obama disagrees with McCain's proposal to cut all government spending in the middle of a depression. "What're we buying anyway with all that money, poop or something?"

9:36 -- Ha ha, McCain unleashes one of his NASTIEST ATTACKS EVER, by saying that he wants to nail Barack Obama's Jell-o to the wall -- not easy! Like most of his other attacks tonight, the Ohio Focus Group immediately flatlines. Tell Better Jokes.

9:37 -- Barack Obama wants to respond, leading to the fortieth lecture from Brokaw about how they LIED TO HIM when they said they wanted these rules. "Fuck you fucks, I knew LBJ" Brokaw says.

9:38 -- [Brokaw cries about dumb ineffectual rules for another minute]

9:39 -- Entitlement reform, again. Barack Obama will cut taxes for 95% of America! (HE WANTS THE POORS TO THINK HE LIKES THEM.)

9:40 -- McCain stands up in the middle of Obama's turn, grinning! What happened was, "Teresa" gave him a big boner and he had to sit down and think about ugly things (his crippled first wife, Carol, is his special de-bonerizing thought), so he was really happy when he got to stand again.

9:42 -- Another black gal has a question for McCain, about the Environment. McCain will clean it while SIMULTANEOUSLY grunting about earmarks, alone, on his private ranch.

9:46 -- Someone finishes answering a question, meaning Tom Brokaw has to yell at them both again. How do you teach those who don't want to learn? Answer: catty sarcasm. Brokaw basically asks them if they've heard of clocks, which can be very useful -- they tell the "time" -- and especially useful during, say, TOM BROKAW'S LAST DEBATE BEFORE HE DIES. John McCain says "no", he doesn't know about these new Apple time gadgets or whatever, and thens asks Tom to act like a crazy retard with hands flailing to tell him the time instead.

9:51 -- Time to discuss health care. Should it be treated as a commodity? Yes! Capitalism! Obama says "Nah nah, I'll get you health care" and then Ellen the lesbian comes out and they dance and he starts shooting 3's from way downtown into Brokaw's trashcan along with his vomit.

9:53 -- John McCain: Obama will give you Mandates, for your children, and then all of America's haberdashers will be low on inventory. McCain says he'll give a $5,000 tax credit to eliminate the employer-based system so people can have more choice. Then everyone can buy individual health insurance, the most expensive and exclusive market for needy consumers for anything on the planet. Oh god and then he brings up that "gold plated plans" crap -- you know, the ones that some people need but which cost $20,000 on the open market! IT'S YR CHOICE BABY.

9:56 -- Obama: "Nah nah, no McCain stuff." Explains how he disagrees about literally everything, John McCain said, EVERYTHING. Health care should be a right! Blah blah you can cross state lines to get health care, my cheap care. Tom shuts him up after a while.

9:58 -- McCain randomly stands up and laughs about Obama not answering some dumb question he wanted to hear. It was, "How old are you, you jackhole?"