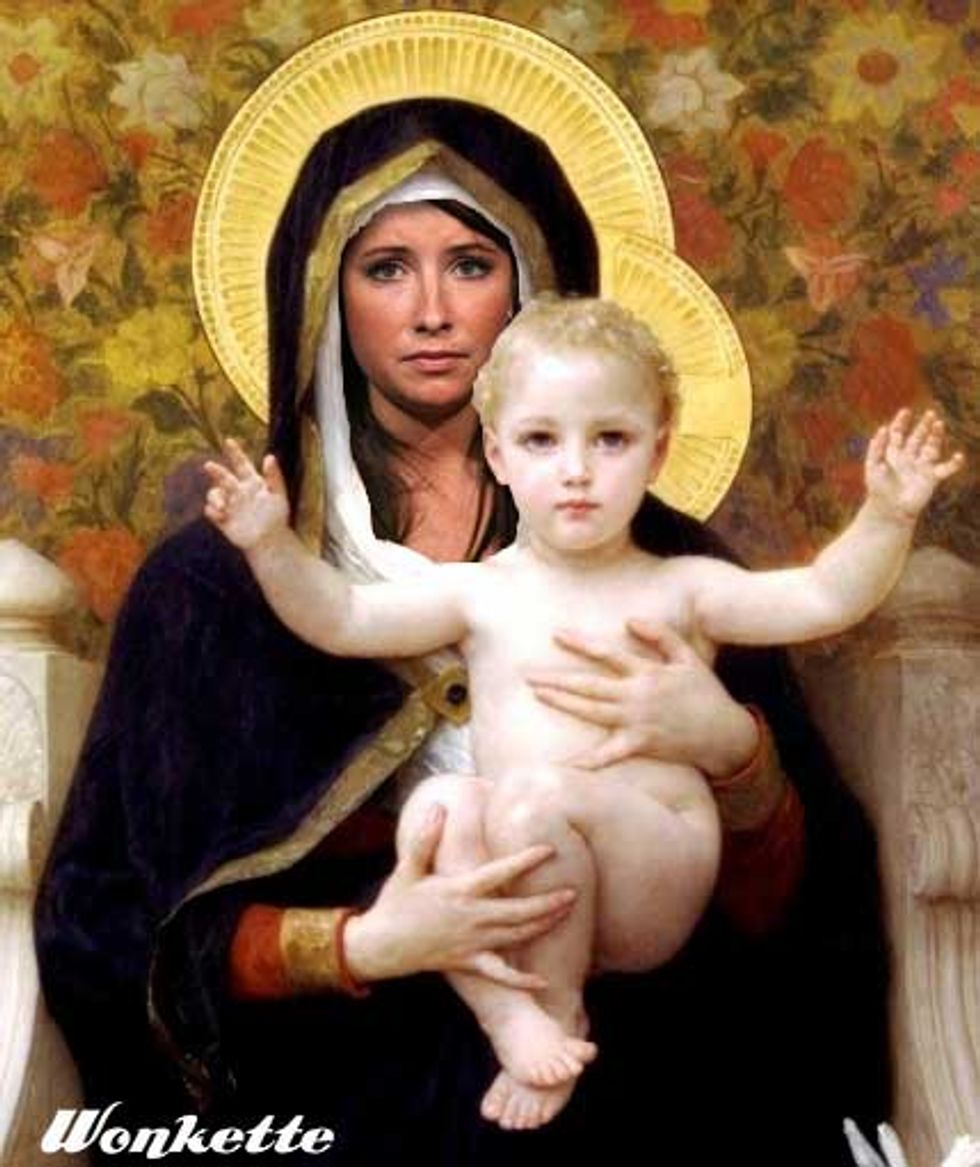 Abstinence before marriage is batting 2 for 2!

It's a Festivus Miracle, just two days late: Abstinence activist Bristol Palin has brought forth from her holy loins a Second Immaculate Palin, a daughter named "Sailor Grace," although around here we'll be calling the miracle child by the winning name in our office pool, Eggnogg. Wonkette wishes mother and child -- who look lovely! -- a happy holiday and many ghostwritten blog entries over the years.

Bristol, who has made a career of telling young people that God doesn't want them to have sex outside the bonds of holy matrimony, announced her virgin pregnancy in June, not long after calling off her engagement to Dakota Meyer, who, while no longer in the Marines (same difference, right?), was clearly still a sharpshooter. God knocked her up real good at some point, although her pregnancy announcement seemed a bit confused as to how all this happened:

Honestly, I’ve been trying my hardest to keep my chin up on this one.

At the end of the day there’s nothing I can’t do with God by my side, and I know I am fully capable of handling anything that is put in front of me with dignity and grace.

Honey, we hear it has very little to do with where your chin is, but that's abstinence-only sex ed for ya. While she was pregnant, she managed to get super-angry that some teen girls in Washington won't have the chance to triumph over adversity by getting knocked up in high school like she did, although somewhere in her addled brain she changed those high school gals into a bunch of ten-year-olds forced to get IUDs by Barack Obama.

Mother and babby are both doing fine, and looking quite beatific indeed! Mommy's announcement of little Eggnogg's arrival is as unintentionally hilarious as anything else she says:

My sweet Sailor Grace was born yesterday, our family couldn't be more complete

Unless, perhaps, it included a father, which we hear you traditional family types are pretty big on. DOH! Forgot something!

Bristol's Instagram feed also included a pic of Eggnogg being greeted by big brother Tripp, who is no doubt warning her that her entire extended family is full of crazy people:

Mommy says we should always blame the media,'kay?

This heartwarming photo was captioned "My heart just doubled," so we're glad that Bristol received prompt medical attention for the unexpected cardiac byproduct of giving birth.

Yr Wonkette has no animus whatsoever toward little Sailor Eggnogg, who is after all a baby and had very little choice in who she ended up with for parents. We wish her all the best, and welcome her with the traditional greeting from Uncle Kurt Vonnegut:

Hello babies. Welcome to Earth. It’s hot in the summer and cold in the winter. It’s round and wet and crowded. On the outside, babies, you’ve got a hundred years here. There’s only one rule that I know of, babies -- “God damn it, you’ve got to be kind.”

Here's hoping that despite her weirdass family, little Eggnog Palin will grow up happy and well-adjusted. Our advice: Get out as soon as you can and write the tell-all memoir of the century.