Lobbyists Stuffing Tax Bill With Cigs, Popcikles And Those Cakes They Like 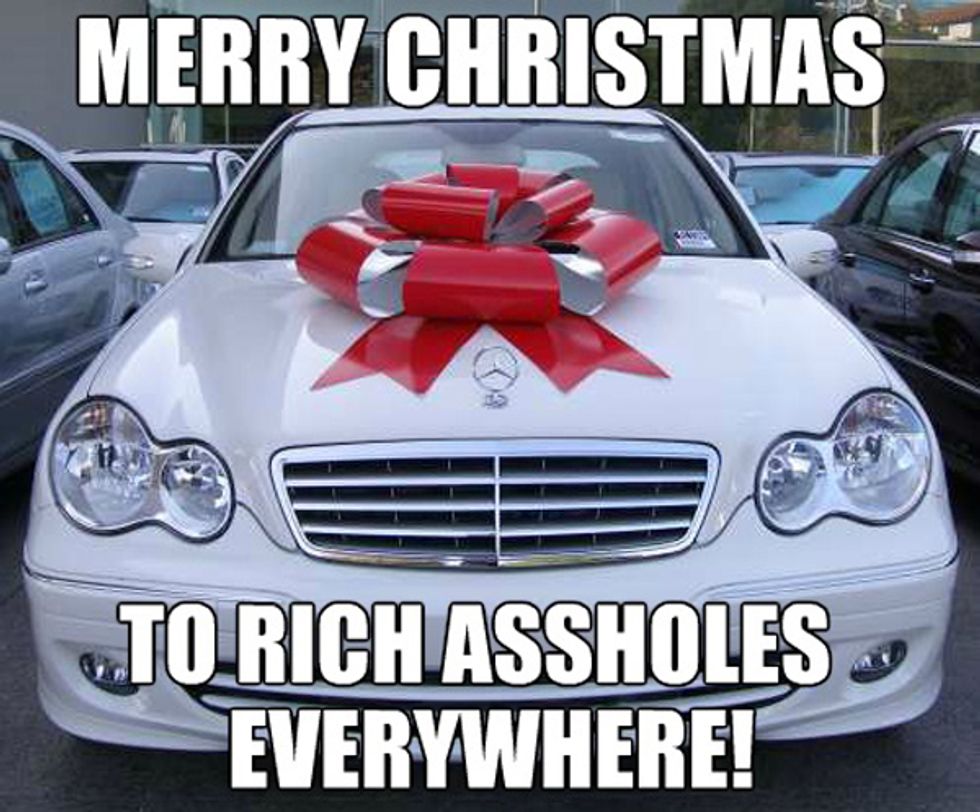 Pfft. If you really loved her, you'd have bought a Bentley. Loser.

Here's a quick reminder of everything wrong with this goddamned Republican tax bill! With a vote planned for today, or tomorrow at the latest, Missouri Democratic Senator Claire McCaskill tweeted out a wish list of amendments to the tax law -- provided not by the Republicans, but by lobbyists. Said McCaskill:

This is so bad. We have just gotten list of amendments to be included in bill NOT from our R colleagues, but from lobbyists downtown. None of us have seen this list, but lobbyists have it. Need I say more? Disgusting. And we probably will not even be given time to read them.

[wonkbar]<a href="http://www.wonkette.com/625395/lol-the-gop-tax-cut-bill-realllly-doesnt-want-you-to-get-edumacated"></a>[/wonkbar]Do we have any idea what half this crap is? Hell no -- and with no hearings, no meaningful time for debate, and not even a text of the goddamned bill yet, neither will the Republicans voting this crap into law. Some of it sounds good, like "Modify low income housing credit/add preferences for vets and rural housing." But maybe those preferences for vets will come at the expense of others, and perhaps a loophole to let slumlords evict people more easily, just to pull some possibilities out of thin air. "Excise tax on university investment income" sounds like one more slam on higher education, which is no surprise.

For all we know, somewhere in there is a tax break for cedar cheese, popcikles, and honeycooked ham turkey. Or maybe a 300% surcharge on cakes we like. Nobody has the slightest idea, but the Rs have to hurry up and pass it immediately, so America will be great again.

In any case, Hawaii Democrat Brian Schatz has had just about enough of this idiocy:

Oh, and the economic stimulus this bill would supposedly supply? Turns out that after years of steady economic growth during the Obama administration, which kept the Great Recession from becoming a worldwide economic collapse, corporations have all the cheap capital they need, and a tax cut will simply be plowed into stock buybacks, corporate mergers, and profits, not expanding employment or wages. Go figure!

But the super-rich need their goodies. They were promised a massive tax cut, and by god, they're going to get their fucking tax cut.

Yr Wonkette is supported by reader donations. Please click here to help us out! We'll save you a spot in the bread line.