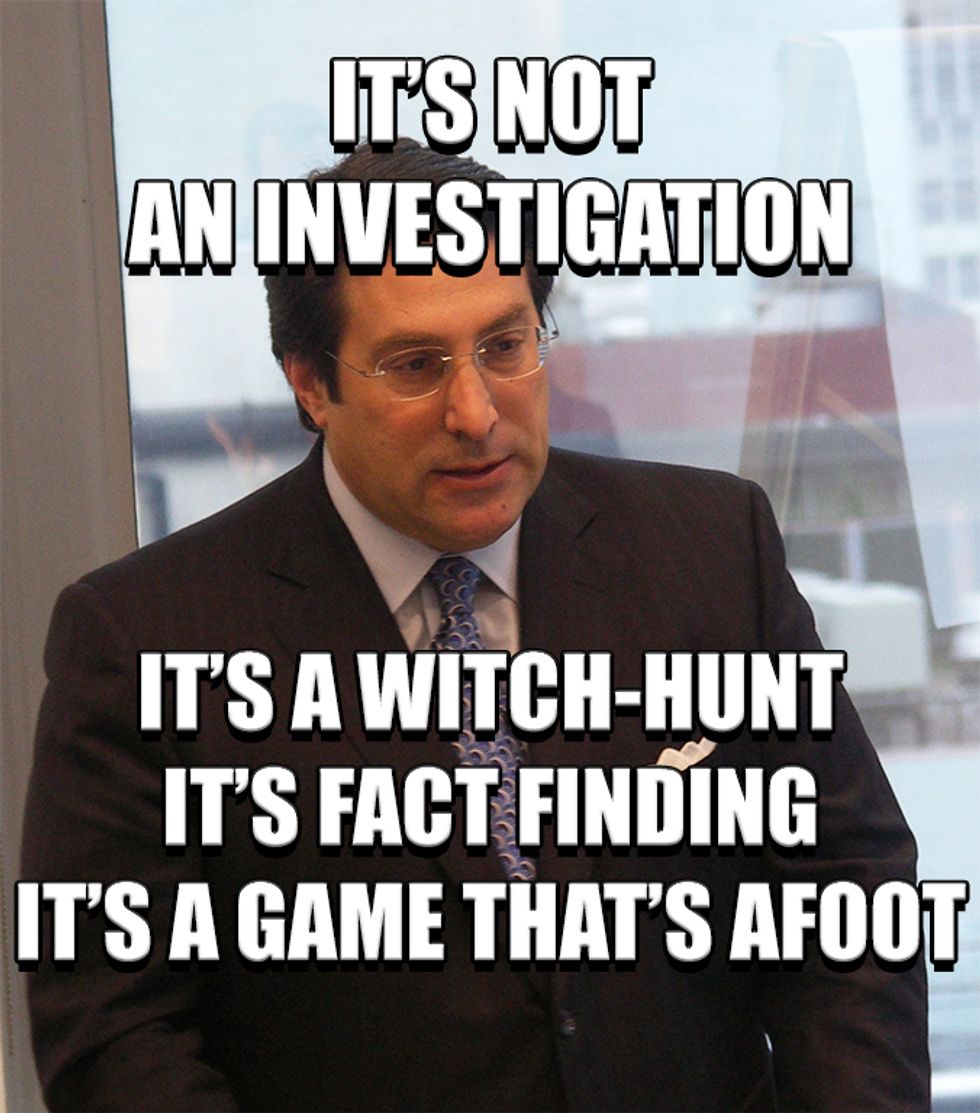 The USS Franklin was struck by a Japanese merchant ship Saturday, leaving the Captain critically injured and seven sailors dead.

A van has rammed into a group of pedestrians in North London, killing one person and wounding 10 others in an apparent terrorist attack on Muslims.

A 17-year-yold Muslim girl from Virginia's DC suburbs was kidnapped and killed after leaving a diner, and police are investigating the incident as a possible hate-crime.

TRUMP IS NOT UNDER INVESTIGATION, so stop saying he's under investigation, even if you're literally quoting him word-for-word when he says he's being investigated. It's a witch hunt, but it's not a special investigative witch hunt -- don't you people watch Law and Order? Just listen to Kellyanne Conway!

Why was Paul Manafort meeting with a Ukrainian business associate who served in the Russian military? Oh, money. A shit load of money. NEVERMIND!

Congressional Republicans are desperate for a win on TrumpCare, even going so far as using shrapnel from the shooting of Republican Rep. Steve Scalise as props to guilt-trip members into a vote.

Trump has drafted an E.O. that would let him "You're Fired" Robert Mueller, but tucked deep inside this same article is a nugget about how much Trump really hates being president.

If they even bother to show up, tech CEOs have to share a room with Trump and Peter Thiel and try not to vomit during a conversation about modernizing government technology later today. [Archive]

Six people on the Presidential Advisory Council on HIV/AIDS have "You're Fired" themselves over Trump's lack of commitment to HIV/AIDS policy and are stating that "Trump doesn't care about HIV. We're outta here."

Vets injured before 9/11 are routinely denied caregiver services due to freedom not being free for quadriplegic grandpas.

Employees of a child care facility for special needs children run by Arkansas Republican state Rep. Dan Sullivan have been fired after a child died in a van. Sullivan has been calling for deregulation of the childcare industry. There's no joke here.

The NRA has been oddly quiet lately. With another mass shooting, and acquittal of yet another cop who killed a black man, it really makes you think about what they're up to.

The Georgia special election is tomorrow, and it's going to be a nail biter, so a PAC for Republican Karen Handel is basically accusing Ossoff of shooting Rep. Steve Scalise in Alexandria last week. Real classy.

A new campaign in Colorado wants to ban smartphones for children, saying they turn kids into creepy, low-energy losers and loners whose only interaction with the outside world is through Pokemon Go.

The anti-gay March for Marriage drew 47 people to DC, a turnout so pathetic that it doesn't seem like anybody bothered to send a reporter.

Milwaukee County Sheriff David Clarke has "rescinded his acceptance" as assistant secretary for DHS which is just a murderer's way of sounding smart, and not like A Idiot.

Some California hipsters stole $300,000 worth of avocados, but really, bro, do you even know how expensive avocado toast is at the locally grown free-trade vegan cafe if you don't have your parents' credit card?

Illinois Republican Gov. Bruce Rauner is dragging legislators back to the state capital and locking them in a room until they agree to his bullshit budget cuts that want to hack and slash social programs that haven't been funded in over two years.

Not America thinks they can rely on Congress to keep the world in balance which is funny as hell because the only thing anyone in Congress can agree on his how much they hate Ted Cruz.

Prince Kushner is packing his Kevlar for a trip to the Middle East to finally bring peace between Israel and Palestine.

GOOD NEWS, EVERYONE! Your new Not American boyfriend, French President Emmanuel Macron is projected to win 355 of 577 seats in Parliament, a massive win for frogmen everywhere (and a hilarious and embarrassing defeat for the veiled neo-Nazis in Marine Le Pen's National Front).

The Mexican government has been using US/Israeli spyware to illegally monitor critics because political dissidents are bad for the business of drugs cartels.

Former commanders and military scholars are bitching that Trump and the Pentagon don't have a plan, despite sending thousands more troops to Afghanistan, and they're just running around flailing their arms in a desperate attempt to look productive.

Trump spent Father's Day tweeting about his poll numbers, haters, and his failures while he dragged his robed ass around yelling at cable news shows.

Megyn Kelly's interview with Alex Jones was far more brutal than everyone initially thought after she called him out for being a lying, manipulative conspiracy theorist, so of course the crazies are insisting she edited the footage to make Jones look like a fat, repugnant turd in a tin-foil hat.

The Student Press Law Center has been busting their butts lately to help student journalists write about things their schools try to censor, and they deserve more than a hearty hug.

The rivalry between the NYTimes and WaPo editors Dean Baquet and Marty Barron is the most adorable nerd fight ever, and we want tickets and popcorn for that pocket-protected slap fight.

And here's your late night wrap-up! John Oliver splainered the idiotic idea that coal is "clean"; Chelsea Handler had some brutal Father's Day advice for Ivanka; Bill Maherwants America to shop smart at S-Mart to bring jobs back.

GIVE US MONEY (please) and we'll give you words, and splainerings, and cute, nice-time animal babies. Deal?