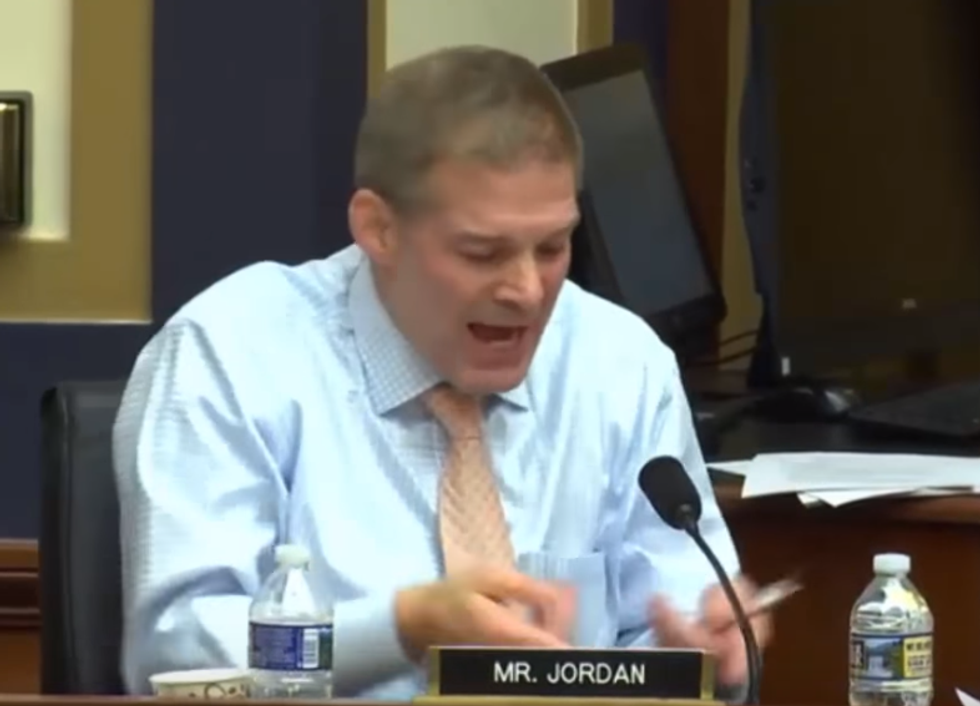 Earlier, we told you Deputy Attorney General Rod Rosenstein spent his day with the House Judiciary Committee, listening to howler monkeys who call themselves GOP congressmen trying their damnedest to convince Donald Trump to try to kill the Robert Mueller investigation. They also really want a second special counsel to investigate why the FBI is so far in the tank for Hillary Clinton and hates Trump so much. (Really. These world champion brain-thinkers have the best short-term memories.)

Watchers on Twitter agree with our assessment that this is just a big (and expensive!) show to convince Trump to try to fire Mueller:

Occasionally, the congressmen let Rosenstein answer a question, but mostly they just did sexxxy obstruction of justice burlesque for the resident White House dipshit. Will it work? Meh, we are skeptical. Trump lawyer Ty Cobb is swearing up and down to his client, the media and anybody else who will listen that Robert Mueller is DONE, FINISHED, THROUGH with all his White House interviews, which OBVIOUSLY means the investigation is almost over and Trump will be declared most bigly innocent president in the history of presidenting. We question Cobb's police work there, but we understand if he needs to say that to keep his loon client from shooting his own dick off again, like he did when he fired James Comey.

We're not going to bore you with one million videos from Wednesday's hearings, because a lot of the GOP reps just sounded like they were reading whatever script Fox News asshole Jeanine Pirro stuck up their butts last night while they were sleeping. We'd rather share at you videos with PIZZAZZ and OOMPH!

That's why we will start with Ohio Rep. Jim Jordan, a man no one has ever accused of having his dick screwed on correctly. We will transcribe his entire line of questioning for you, and by "transcribe," we mean we are going to write down animal sounds that resemble Jordan's words:

MOOOOOOOOOOOOOO! DID THE FBI PAY CHRISTOPHER STEELE FOR THE DOSSIER? YESTERDAY I THOUGHT THE ANSWER WAS YES, BUT NOW I THINK IT IS OH GOLLY YES, BECAUSE THAT GUY ROBERT MUELLER FIRED WROTE TEXT MESSAGES! THIS PROVES THINGS TO ME, BECAUSE MY OHIO SQUIRREL BRAIN IS MADE OUT OF STIR-FRIED GOAT SEMEN!

MOOOOOOOOOOOOOO! TEXT MESSAGES! PETER STRZOK RAN THE HILLARY CAMPAIGN! WAIT NO HE DIDN'T! HE DID OTHER STUFF!

MOOOOOOOOOOOOOO! AND ALSO FART! PETER STRZOK WAS WORRIED TRUMP WAS GOING TO GET ELECTED, ACCORDING TO ONE OF HIS TEXTS, BECAUSE IT WOULD BE BAD FOR AMERICA TO HAVE A RUSSIAN INTELLIGENCE ASSET AS PRESIDENT! OH NO, DON'T LOOK AT THAT PETER STRZOK TEXT! JIM JORDAN DID NOT MEAN TO DRAW ATTENTION TO THAT! OOPS!

MOOOOOOOOOOOOOO! NEW SPECIAL PROSECUTOR TO INVESTIGATE THE DOSSIER AND HILLARY AND ALSO EVERYBODY WHO MAKES FUN OF JIM JORDAN WHEN HE POOPS HIS PANTS IN PUBLIC LIKE THIS!

So that's how that went.

While Jordan was unleashing his verbal river of horseshit about appointing a new special counsel, he didn't allege a single crime, which is a shame, because SPECIAL COUNSELS ARE APPOINTED TO INVESTIGATE CRIMES, YOU FUCKWIT.

After Jim Jordan, we almost feel sad showing you Louie Gohmert, because Jordan clearly out-crazied him. But we'll be Ford Tough and have Gohmert time, don't worry.

But to set up Gohmert, let's first watch Democratic Rep. Steve Cohen of Memphis (HI, OUR CONGRESSMAN, HI!), who gave a SHOUTY and PASSIONATE defense of the FBI, and talked at length about how grotesque and un-American it is that these GOP shitferbrains are impugning its integrity, just because they're upset their pussgrabbing trash prince in the Oval is probably also a big crimer. Cohen also gave Rosenstein a chance to talk at length about what a badass Robert Mueller really is.

As Cohen noted how all these GOP asswipes used to looooove Robert Mueller, before he was appointed to investigate their beloved president -- and more particularly, when Cohen said everybody in Congress respects Mueller -- Louie Gohmert piped in to say, "I didn't! I don't!" Louie Gohmert would like the record to show he has ALWAYS been a birther moron when it comes to Robert Mueller.

As for Louie Gohmert's actual questioning, here are the highlights: