Look What You Made Taylor Swift Do! 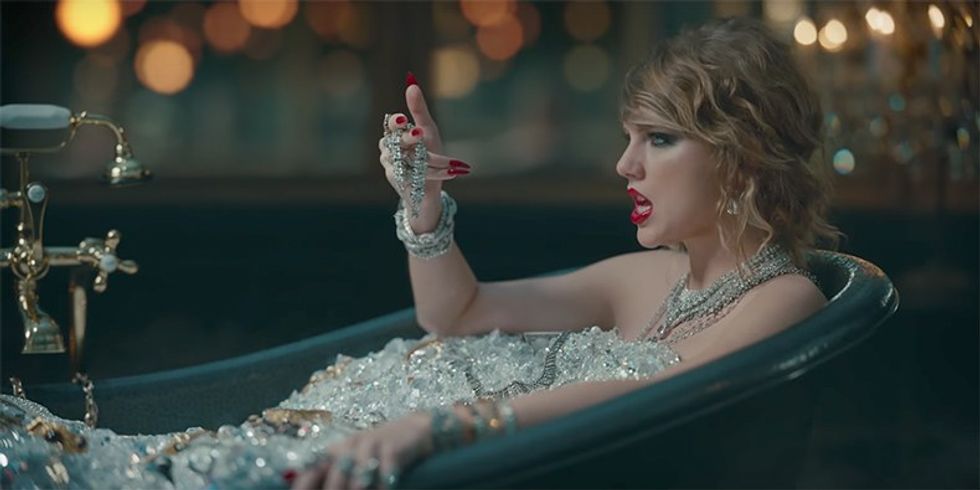 As you very likely know by now, all the alt-right nazis are super obsessed with Taylor Swift. It is a whole thing and has been a thing for a while. It is not a particularly surprising thing, as she does have that whole Aryan look going on, and is also kind of the worst. They obsess over her like, well, like Swifties, posting images and memes of her declaring her their perfect Aryan goddess and what have you, and often suggesting that Swift is, herself, some kind of stealth Nazi. Which she is not.

Perhaps most notably, Andrew Anglin of Stormfront once told Broadly that “It is also an established fact that Taylor Swift is secretly a Nazi and is simply waiting for the time when Donald Trump makes it safe for her to come out and announce her Aryan agenda to the world.”

In a September 5th article on PopFront, titled "Swiftly to the alt-right: Taylor subtly gets the lower case kkk in formation" Meghan Herning suggests that Swift may be aware of this fan base, and that the video for “Look What You Made Me Do” and the lyrics of the song itself were designed to appeal to them on some level, somehow. See if you buy it:

Taylor’s lyrics in “Look What You Made Me Do” seem to play to the same subtle, quiet white support of a racial hierarchy. Many on the alt-right see the song as part of a “re-awakening,” in line with Trump’s rise. At one point in the accompanying music video, Taylor lords over an army of models from a podium, akin to what Hitler had in Nazis Germany [sic]. The similarities are uncanny and unsettling.

OK, do I think Taylor Swift is purposely trying to appeal to Nazis? No. I do not. I do not think she is even clever enough to pull that off. But Herning is entitled to her opinion. She also suggested that, even if Swift weren't purposely trying to appeal to Nazis, the fact that she's never said "Hey Nazis, you are gross, I do not want to be your Aryan love goddess" is not cool.

“Taylor’s silence is not innocent, it is calculated. And if that is not true, she needs to state her beliefs out loud for the world -- no matter what fan base she might lose, because in America 2017, silence in the face of injustice means support for the oppressor.”

That, I am somewhat more on board with. I can get that. If Nazis were going around saying I was secretly one of them, my first instinct would be to be very upfront about how very wrong they are about that, and that's something anyone who is not a Nazi should eagerly do.

But Taylor Swift and her lawsuit-happy band of lawyers are not on board with it at all, and have sent a cease-and-desist letter to PopFront demanding they delete the article.

“The notion that Ms. Swift supports white supremacy is utterly fabricated and a reprehensible falsehood, and it attempts to portray Ms. Swift in a false light. Let this letter stand as a yet another unequivocal denouncement by Ms. Swift of white supremacy and the alt-right.”

I am quite certain that similar letters have not been sent to the actual Nazis going around saying that Swift is one of them. Mostly because I know for a fact I would have been right on top of "Taylor Swift sues Andrew Anglin."

The PopFront post is, of course, an opinion article, not a reported piece. Herning is entitled to her opinion.

For instance! I can say that I still think the bigger Taylor Swift awards show scandal was actually Swift DARING to sing with the beautiful, talented and perfect Stevie Nicks at the 2010 Grammy Awards and being terrible at it.

I can also say I think she is the worst, and that her various weird music video attacks on Katy Perry have actually made me like Katy Perry, a thing I once never thought possible. I am now Team Katy Perry forever.

Weirdos on YouTube are free to make up theories about how her videos prove she is in the Illuminati.

Why? Because of the First Amendment.

Does it suck for Taylor Swift? Sure, it sucks for lots of celebrities. It sucks when people interpret things you did in a way you did not intend. I've been there, even. But it's not a thing you sue over or send cease-and-desist letters over. You get out there and publicly say "I am Taylor Swift and no, I am not into Nazis. I'm also not in the illuminati, and I don't care what Robyn thinks about my singing with Stevie Nicks." That is how that is handled.

Because we've got enough attacks on the free press happening right now -- from Harvey Weinstein's attempts to derail reports on his misdeeds, to Disney's blacklisting of the L.A. Times, and no one needs Taylor Swift jumping in there with this bullshit.

Now you people get to your open thread, OK?