Looks Like GOP Sen. Bob Corker Thinks Trump Is A Moron Too! 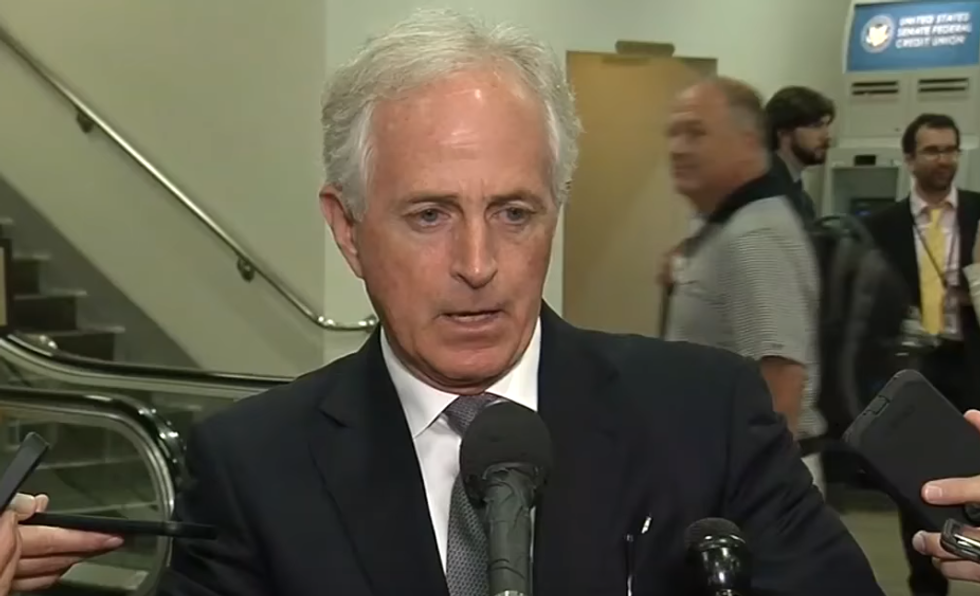 The less dumb senator from Tennessee.

Add another one to the list! Bob Corker, Republican senator from Tennessee, said some very interesting things about Donald Trump right to a reporter's face on Wednesday. Corker is retiring at the end of his term -- maybe he's running for governor, maybe he wants to primary Trump in 2020, maybe he just wants to catch more big sales at the Big Lots by his house, fuck if we know -- so it's possible he's more willing to say completely honest things about the president than he was before. Then again, Corker did say a couple months back, in his very polite Southern way, that Trump is incompetent, so this isn't brand new.

Corker was just shooting the breeze about Secretary of State Rex Tillerson's correct belief that Trump is a moron, and he said this:

CORKER: I think Secretary Tillerson, [Defense] Secretary [Jim] Mattis and [White House] Chief of Staff [John] Kelly are those people that help separate our country from chaos, and I support them very much. And I don't know what he may have said after the briefing. I watch from — I mean, look, I see what's happening here. I deal with people throughout the administration, and [it] from my perspective is an incredibly frustrating place where, as I watch, okay — and I can watch very closely on many occasions — I mean, you know, he ends up not being supported in the way that I would hope a secretary of state would be supported. [...] I think he's in a very trying situation, trying to solve many of the world's problems a lot of times without the kind of support and help that I'd like to see him have.

Q: Did he ever think about resigning at any point?

CORKER: I can’t get into that.

Q: When you say that Tillerson, Mattis and Kelly are separating this country from chaos, do you mean from the president’s chaos?

CORKER: Well, it’s just they act in a very — they work very well together to make sure that the policies we put forth around the world are sound and coherent. There are other people within the administration, in my belief, that don’t. Okay? I’m sorry.

In other words, DON'T GO, REX TILLERSON, YOU ARE AMERICA'S ONLY HOPE FOR SAVING US FROM ALL THESE FUCKING LOSERS!

As WaPo notes, you need to watch the video, because you need to see Corker's face saying these words about how Tillerson, Jim Mattis and John Kelly are the only thing protecting us from "chaos," by which he means "Donald Trump," and further adding that Trump treats Tillerson like shit. Bob Corker is disgusted by this president, which is funny because Tennessee GOP Senator Lamar Alexander (or as we call him in Tennessee, "the one who is stupider than Bob Corker") has said in the past that Corker talks to Trump more than any other senator. Not anymore, probably!

As for Donald Trump, the orange-faced pussbaby stinking up the Oval Office is having a bona fide tantrum over #FakeNews right now, accusing NBC News of literally making up the story about Tillerson calling him a fucking "moron," as if NBC News is ClickHole or something. He can't get it through his weak, sad, physically repulsive skull that literally EVERYONE IN THE WORLD WITH TWO BRAIN CELLS TO RUB TOGETHER thinks he's a moron, at the very least. Most people think even more awful things about him than that!

Sorry, President Dickshit, but they weren't elected to investigate your hurt feelings.

Maybe the motherfucker should resign.

Wonkette salaries, servers, and all of the things are fully funded by readers like you! Click here to keep us ad-free!