Looks Like It's Time To Execute Another Mentally Ill Guy, For Justice 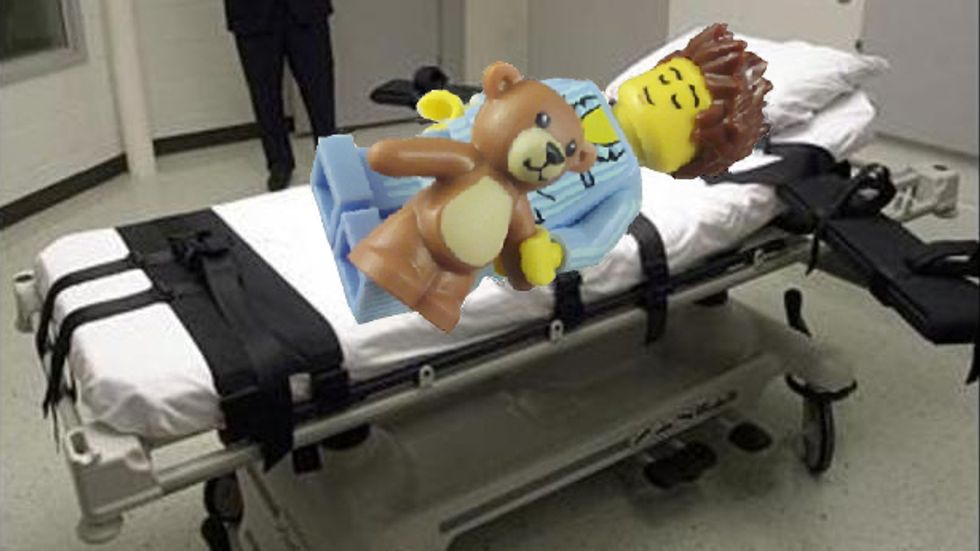 We know you're all sick of Ebola and ISIS, so here's a pick-me-up: Texas is fixing to execute Scott Pannetti, who is so disconnected from reality that he buried a sofa and other furniture in his yard because he was sure the Devil was in it. He murdered his in-laws in 1992, in front of his estranged wife and infant daughter -- his wife had left him two years earlier, after he threatened her with a cavalry sword. He turned himself in to the police and explained the killing was the fault of "Sarge," one of the people in his hallucinations. By the time of the killings, Panetti had been "diagnosed with paranoid schizophrenia, delusions, auditory hallucinations, and manic depression, and had been hospitalized 14 times."

Panetti was allowed to represent himself at his trial, because Texas, even though he subpoenaed as witnesses Jesus, JFK, and the pope. He refused to cooperate with his court-appointed attorneys, who he was sure were conspiring against him with the police. And he certainly made an impression on the jury:

Two jurors later told one of Panetti's lawyers that his behavior had so frightened them that they voted for death largely to make sure he'd never get out of prison. (Texas at that time did not offer the option of life without parole.)

And so of course in 2003 Texas found that he was sane enough to be put to death.

This is where we add our standard disclaimer about death penalty stories: Yes, Panetti committed a horrible crime, shooting his in-laws to death in cold blood. We are not claiming he didn't do it or that killing people is OK. In fact, we're so against killing people that we don't think the state should be in the business of killing people, either -- especially when those people are so mentally ill that they are incapable of understanding what they did or what is going to be done to them. And no, we don't think there's any contradiction between opposing the death penalty and saying that murder is bad.

And how did we get to this crazy place, where a severely mentally ill man is about to be put to death despite Supreme Court decisions supposedly outlawing the execution of the severely mentally ill? That's complicated, and it's unraveled in desk-punching detail by Stephanie Mencimer in Mother Jones. In essence, the Court, wary of laying out a specific set of guidelines, has merely ordered the states to take unspecified steps to make sure that they don't execute anyone who is "unaware of the punishment they're about to suffer and why they are to suffer it." And the states have complied, setting the bar for competence so ridiculously low that they still execute people with severe mental illness:

"Competence to be executed is an extremely low standard," explains Phillip Resnick, the director of forensic psychiatry at Case Western Reserve University. "All you need to know is you're going to be executed and why. You can be quite psychotic and still know those two things."

The Supreme Court even delayed Panetti's execution in 2007, ordering Texas to evaluate him carefully and make sure that he had "a rational understanding" of what was going on. Unfortunately for Panetti, Texas hired Alan Waldman, a freelance psychiatrist from Florida whose specialty is assessing accused prisoners and declaring them sane enough to execute. Seriously, go read the MoJo article, if only for its profile of Waldman, who is almost too bizarre to believe, unless of course you're a Texas death-penalty jury.

Waldman billed Texas $250 an hour to examine Panetti and $350 an hour for his testimony. He determined that Panetti was very definitely faking his mental illness -- the same assessment Waldman usually finds among the defendant population. Going by Waldman's history, there may not actually be any such thing as mental illness, since he never seems to meet a single defendant who is mentally ill. As proof that Panetti was definitely faking, Waldman cited the fact that Panetti kept calling him "Dr. Grigson." James Grigson was the quack Texas psychiatrist nicknamed "Dr. Death," whose stock in trade, as detailed in Errol Morris's brilliant The Thin Blue Line, was testifying that every defendant he ever interviewed was a cold, manipulative psychopath who would definitely kill again unless put to death. Obviously, said Waldman, Panetti had to be a manipulative, calculating creep (and perfectly sane) to pretend that Dr. Waldman was Dr. Grigson:

[He] he suspected that Panetti's mother had coached her son to bring up Grigson -- that Panetti had "premeditated" the whole thing as a way to "handle" his examiner. Defense attorney Kathryn Kase informed him, however, that Grigson had in fact testified at Panetti's trial -- and Panetti, representing himself, had cross-examined him. He had been obsessed with Grigson ever since. Waldman hadn't known any of this, he admitted.

Waldman also conceded that he hadn't given Panetti a single test or standard psychological exam, even though such things—including a test for malingering schizophrenia—not only exist, but are used regularly in his field.

Not surprisingly, Texas prosecutors have relied extensively on Waldman's assessment to argue in appeals that Panetti is sane enough to be killed. And now the Supreme Court has given the go-ahead for Panetti to be executed. Who knows, maybe Bill Clinton can fly in to witness it. Panetti may not want his last piece of pecan pie, either.