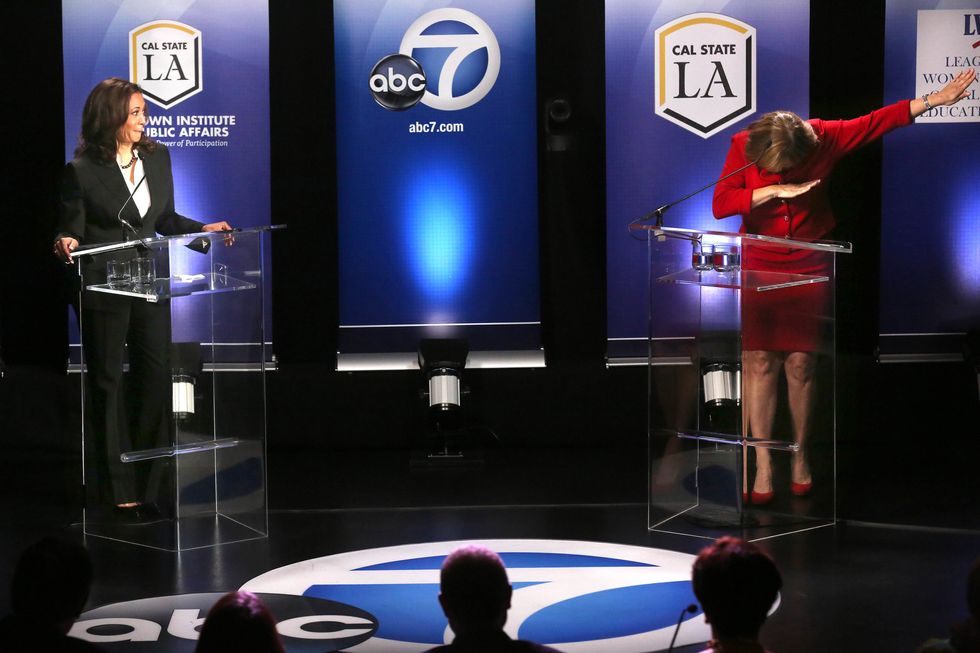 Rick Loomis of the LA Times must have died when he developed this, like in The Paper. They still do that right?

Ninety-nine percent of the coverage of the US Senate debate between California Attorney General Kamala Harris and Congresswoman Loretta Sanchez (both Democrats facing each other after the state's "jungle primary") will focus on a picture by Rick Loomis of the LA Times, because WHAT THE HELL WAS SANCHEZ DOING at the end with her sportsball dance, "the dab," which also looks like she is doing Thriller?

And it was indeed WTF!

Did Loretta Sanchez #dab at end of Senate debate with Kamala Harris? What do you think? @NBCLA pic.twitter.com/YeAb0zYWsj

But cruising through the entire debate -- it's just an hour! come on and sit a spell! -- you will be forgiven for wondering WHO IS THE CRAZY WOMAN making all the faces and E NUN C ATING all her syllables and words as if she is trying to be a So Cal Grey Gardens grande dame, and also is kind of shockingly dumb?

Hint, it is not Kamala Harris!

Considering how outclassed Tim Kaine was by Mike Pence in this week's vice-presidential debate, style-wise, I'm attempting to go by Harris's and Sanchez's actual answers and policies, and leave weird faces and tics out of it. But it's haaaard. Then you realize Sanchez's answers and policies are vague and lame and scatterbrained, while Harris's are straightforward, knowledgeable and competent. So there's that. (About 10 minutes in, I called my mom to tell her she had to watch this crazy Loretta Sanchez/Kamala Harris debate. She stopped me before I could: "First, I've got something for you!" she said. "You have GOT to watch this crazy Loretta Sanchez/Kamala Harris debate!")

Early in the debate, Harris and Sanchez are asked about a federal policy for police body cams. Harris, her very conversational and definitely not-canned style marred only by a few "ums," talks about leading the California AG's office into first-in-the-nation policies on "busting open" the data around cop shootings. Sanchez just calls Harris "absent" (from Congress?) and then says few people know this, but the Santa Ana PD came to her church last Sunday to do "service" to them and everything will be fixed if cops just hang out at black churches.

It's kind of dumb!

You know what else was dumb? Calling Harris "absent" when Harris could then pull out of her back pocket that Sanchez, out of 435 House members, was the third-most absent, missing two-thirds of Homeland Security committee meetings, whoops. Unforced error, Sanch.

Sanchez yells a bunch. It is weird. Harris is calm even though she is nonplussed by being on the stage with a lunatic.

On Californians voting to legalize recreational marijuana, Harris says she believes the ballot initiative will pass, here's what it means for a community that has been criminalized, and it's time to reclassify marijuana away from Schedule 1. Sanchez says instead of "talk," she's actually "done something" on the issue -- which is to try to get it rescheduled, but that hasn't happened, so why be so pugilistic? And why take a victory lap for a thing you haven't accomplished while calling the other person a loser? Why be a dick? Harris, calmly, reminds voters Sanchez has voted for legislation allowing mandatory minimums for juveniles, and trying 13-year-olds as adults.

That was all in the first 20 minutes. It goes on and on like that!

Sanchez has taken some good votes in Congress; she voted against the PATRIOT Act and the Iraq War, which weren't easy votes in Orange County, California, or in the rest of the country either. But holy shit, is she stupider than I ever remember. (I used to see her at Dem events when I covered politics in OC. Mostly that took the form of her picking up my sweet small buttercup of a son, swinging him around, and then realizing with chagrin he was mine. I hadn't written much positive about her. But I never remembered her seeming actually impaired?)

If you don't have an hour, pick any moment at random. Watch one response by Sanchez, and one response by Harris. Be dismayed that a long-serving Democrat is so bad at this; she's veritably Bachmannian except she seems crazier. Then be re-mayed that she's going to be beaten by a better one.