Loser Republicans Want Debates To Be More Fair To Losers 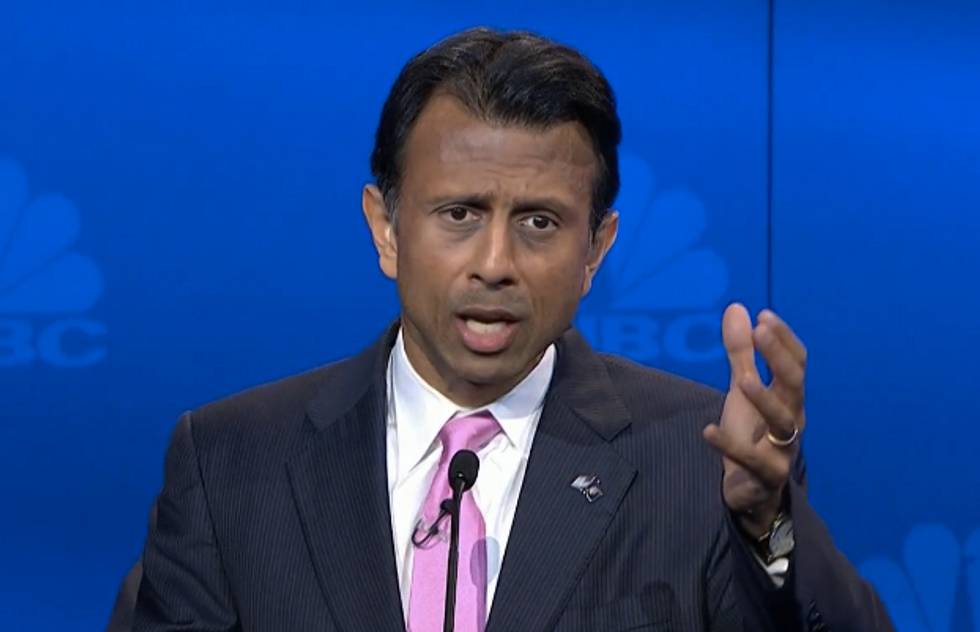 Won't someone please think of the losers?

This is so pathetic, even we feel sorry for the Republican Party. Yes, we, Yr Wonkette, always first in line to instruct Republicans on the various ways they should have sexual relations with themselves, often involving unhygienic tools.

After boo-hooing about how last week's CNBC-hosted Republican debate was SO mean and SO unfair -- they tried to make Ben Carson do math, for fuck's sake! -- representatives from the campaigns had a stitch-n-bitch Sunday night, where they braided each other's hair and expressed all their sad feelings about how it sucks to be them.

[T]he campaigns wish to have in all future debates a minimum 30-second opening statement and a minimum 30-second closing statement for each participant; candidate pre-approval of any graphics and bios you plan to include in your broadcast about each candidate, and that there be no “lightning rounds” because of their frivolousness or “gotcha” nature, or in some cases both.

Sure, the reason Jeb Bush is about three, maybe four at most, stupid fucknut statements from dead is because of the mean liberal media's unfair graphics under his face during the debates, and not because Jeb Bush is a stupid fucknut, whose own campaign posted a video of him STRUGGLING TO PUT ON A SWEATSHIRT.

Is there more? Sadly, yes. The campaigns want all future debate sponsors to promise, among other things, they will not:

So, no asking "Gov. Huckabee, have you ever fucked a goat, yes or no?" without allowing him sufficient time to explain, "Yes, but the goat was asking for it."

No showing the live studio audience sleeping through George Pataki remembering that time he was governor of 9/11.

No showing the candidates using notes -- "America, Obamasux, freedom, America" -- because god fucking forbid Republicans appear not to have all their rehearsed canned answers memorized in their heads.

And no ass shots, because ewwww gross.

Plus, they want a "pledge that the temperature in the hall be kept below 67 degrees," presumably so none of them (Marco Rubio) looks like a shiny sweaty mess of Marco Rubio.

The terms of this demand letter were apparently agreed to by all Republican presidential campaigns, even the ones that don't count, like the second-tier losers all polling at or just a breath above nothing. Awww, so nice to let the little ones play with the big kids, huh?

Not included in the final list of demands was a novel idea that every candidate deserves a participation trophy and the chance to stand next to Donald Trump. Guess who thought that should be included, for fairness:

Being considered is a proposal to split the 14-candidate Republican field into two equal-sized debates, with candidates drawing straws to determine who competes in each. The proposal is being pushed by campaign representatives of Jindal and Sen. Lindsey Graham (R-S.C.), who would naturally benefit from the even distribution. Both men have been relegated to the "undercard" debates, which have a far smaller audience than the main-stage events, and a kiddie-table stigma.

Forgive us for our confusion, but we thought the Republican Party was all about meritocracy. No free handouts, no special treatment, no affirmative action just because the system is inherently unfair. You want to be a winner? You're in America, that's all the advantage you need to get there yourself.

"Make it more fair for the losers" is about as un-Republican as it gets.

Not that the completely arbitrary rule of "top 10 candidates only" makes any sense, of course. CNN already shrugged it off when Carly Fiorina whined her way into the 11th slot. But rules are rules, and you can't let people cut ahead in line just cuz they wanna. We're pretty sure we've heard every single Republican presidential candidate say something like that.

But, as is always the case with the GOP, they only mean that for other people. When it comes to Republicans, it's different because it's different, shut up, it just is. And that is why Bobby Jindal -- who is losing in New Hampshire to Jim "Who the fuck?" Gilmore -- should get to pretend he is a legitimate candidate for president, otherwise it's unfair to him, poor guy. He probably wants a fancy-pants greenroom with a big screen TV and a jacuzzi, too. Because he deserves it ... somehow.

Well I think we should have moderators who are interested in disseminating the information about the candidates, as opposed to, you know, 'gotcha' 'you did this' and 'defend yourself on that.'

We certainly wouldn't want any further incidents of Ben Carson being asked about that time he used his reputation as a world-class neurosurgeon to shill for a fraudulent "nutritional supplements" company. For 10 years. Or how the hell his "tax plan" is supposed to work. That's not what voters want to know. Can't Carson just give a long opening statement, then say "thank you and goodnight," and be done with it?

Not that you needed the reminder, but these are the same manly mas macho candidates who can't stop blustering about how when they are president, they will kick so much Iranian ayatollah ass and show Putin who is the boss of him, with their toughness. And ooooh, just wait until they get their debate holes all over Hillary Clinton.

But first they need to earn the Republican nomination. And to do that, they're going to need debate moderators to tone it down and not ask the tricky questions and be very gentle while fondling the candidates' balls and say only nice things to them and about them, or else it's unfair, and then how are they supposed to win, huh?