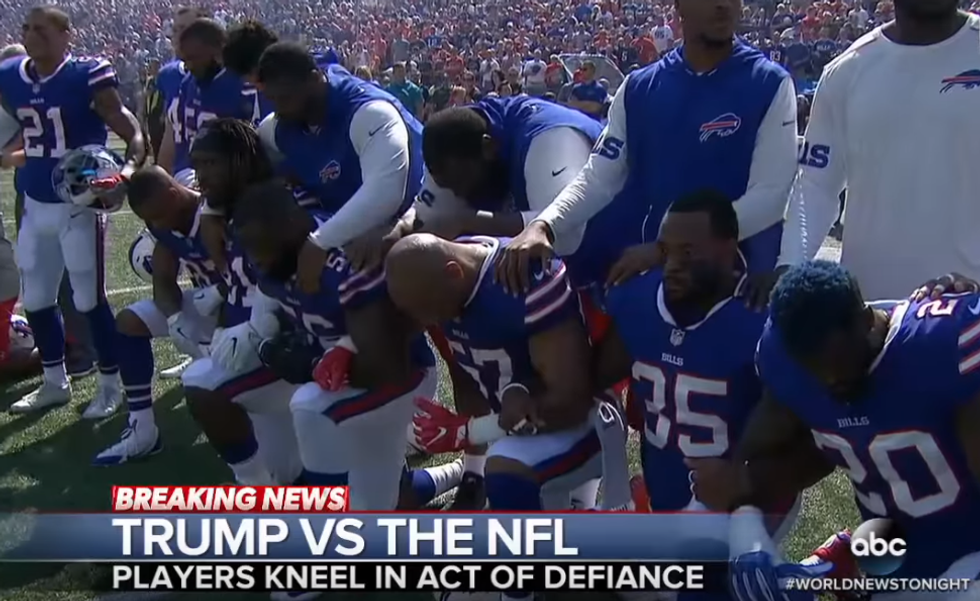 King Fuckhead of Trumpfuckistan was up early Monday morning, continuing his very presidential war against   mean football players taking a knee to protest racial inequality, which, according to the First Amendment, they very much have the right to do. This, you see, has hurted his thin-skinned feelings very bigly:

Breaking news, people who think turning left is a "sport" are A-OK in Trump's eyes. Also breaking news, Trump still has a generally high opinion of low-information white people. Who could have fucking predicted?

Big fucking deal. Are those idiots really going to boycott FOOOOBAWWWWW now? Really? Is that a thing that NFL owners are worried about?

A Trump-linked group called America First Policies is actually trying to make a boycott happen. It. Is. Adorable. Patton Oswalt noticed something weird about its ad, though:

All right, look, White Supremacist-In-Chief, you don't actually get to say what "the issue of kneeling" is about. You didn't start the goddamned protest, did you? Then STFU about what it really means.

Of course, the orange trash boy has been bitching all weekend. We've covered a lot of what he's said, and what athletes and their moms and other generally wonderful Americans have had to say in response. ("U BUM.")

Trump thinks it's cool that his white friend Tom Brady locked arms with his fellow New England Patriots on Sunday, because he's apparently too stupid to realize those interlocked arms were a giant "fuck you" directed at him. The New York Times has a couple of juicy tidbits about the Patriots, whose owner and whose "Tom Brady" have been biiiiiig Trump backers in the past:

Green Bay Packers quarterback Aaron Rodgers posted a photograph of himself kneeling with three of his teammates during warm-ups before the game, and New England Patriots quarterback Tom Brady, a supporter of the president, “liked” Rodgers’s photo. Later, before the Patriots’ game against the Houston Texans in Foxborough, Mass., Brady locked arms with a teammate on the field and placed his hand over his heart during the anthem. Rodgers stood during the anthem, but three of his teammates sat on the bench. [...]

... [O]ne of the more surprising reactions came from the Patriots’ owner, Robert K. Kraft, a friend and campaign donor of the president who has invited Mr. Trump to sit with him at home games, as well as from other owners who were considered bedrock supporters of the president.

“I am deeply disappointed by the tone of the comments made by the President on Friday,” Kraft said in a statement hours before the New England game, adding that he supported players’ “right to peacefully affect social change and raise awareness in a manner that they feel is most impactful.”

Dumbass Trump has literally no idea how stupid of a fight he's decided to pick this time. Then again, he's never been too bright when it comes to picking battles.

The New York Times has a nice round-up of the rest of the NFL protests that happened Sunday. The Oakland Raiders played the Washington Redskins, and the whole Raiders offensive line (all of whom are black guys, as NYT notes) kneeled, while basically the entire rest of the team either kneeled or otherwise ignored the national anthem. Many of the Redskins did the same. Reportedly they all wanted to stay in the locker room, but they would've gotten a penalty if they did, so they went with kneeling. The Tennessee Titans and the Seattle Seahawks played hooky from the national anthem, as did the Pittsburgh Steelers. So much solidarity, in support of racial justice and America and against President Fuck-Bonkers!

BUT then he went and fucked it all up by saying something stupid:

Oh Drew Brees, you are so pretty. Just stand there and look pretty, OK?

We'd be remiss if we failed to mention that noted shitheel Treasury Secretary Steven Mnuchin weighed in, saying athletes "can do free speech on their own time," which is funny since A) that is not how any of this fucking works and B) Mnuchin sure does like doing personal things on the country's dime. We guess it's OK when you're  noted shitheel Steven Mnuchin.

(Oh and also too, did Donald Trump not want ESPN's Jemele Hill fired for saying ON HER OWN TIME the very true fact that Trump is a white supremacist? HMMMMMM he sure does want a lot of people fired who don't actually work for him!)

Anyway, this has been a very productive weekend in U.S. America, and our president is absolutely qualified to hold the office Russia jamfucked him into. You bet. We can hardly wait for whatever fresh hell he'll create for us this week. U-S-A! U-S-A! U-S-A!