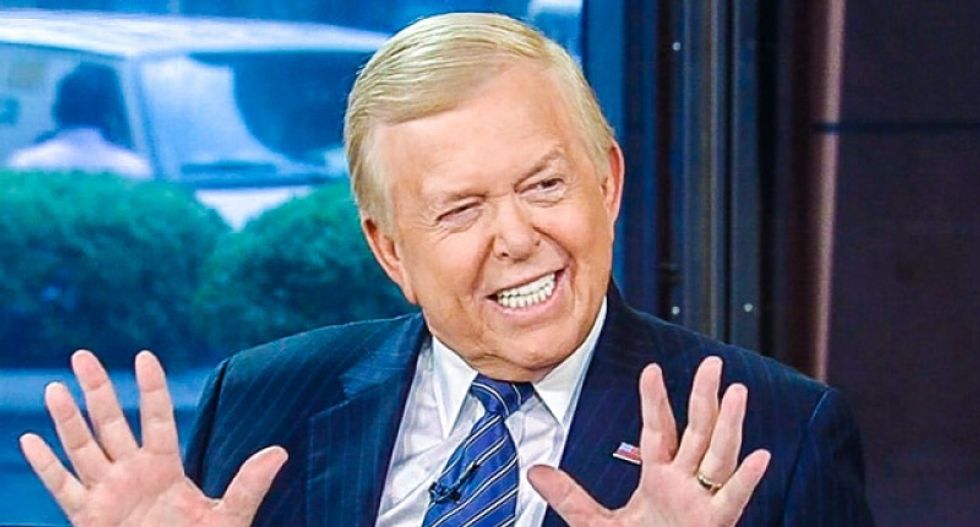 Gosh, these terrible Clinton supporters are so terrible

Here's one way to keep people from causing trouble for Donald Trump: Retweet lies about their supposed connections to Hillary Clinton that contain one very important true thing: the accuser's address and phone number. The day after the New York Times carried a story accusing Trump of groping Jessica Leeds on an airliner in the early 1980s, Fox Business Channel host Lou Dobbs tweeted out a screenshot of a message claiming Leeds had the very same phone number as the Clinton Foundation, and listing what appeared to be Leeds's phone number. Which, incidentally, was not the same as the Clinton Foundation's. To top it all off, Dobbs complained -- yes, above a tweet containing a private person's personal information -- "This is the Dirtiest Campaign in our History":

Image from Business Insider; personal information redacted by them

At least he confirmed his claim with his very own Tweet. And even though the original tweet was deleted fairly quickly (the article at the wackaloon conspiracy site it linked to is still up, although Leeds's alleged phone number has been blurred), Dobbs's tweet remained up for a couple hours, giving trolls the chance to make some phone calls. Charming, huh?

Dobbs later posted an apology, of sorts, albeit one plastered with the omnipresent #MAGA (Make America Great Again) hashtag.

[wonkbar]<a href="http://wonkette.com/601202/after-gq-profile-of-melania-trump-fans-send-writer-amusing-auschwitz-pics-death-threats"></a>[/wonkbar]Still, it's a comfort to know he was sorry about posting Leeds's information. It's not like other Trump supporters would do anything untoward with a prominent Trump critic's name and address, after all. For heaven's sake, none of the other women who've accused Trump have been getting attacked online:

These Trump supporters seem nice. That very first one is from Award-Winning Journalist Chuck C. Johnson, who did some Sherlock Clouseau work and concluded that since Stoynoff -- whose job is to write about celebrities -- posted Facebook messages about Kirk Douglas and Mike Tyson, well then OBVIOUSLY Stoynoff is fixated on rapists:

Kirk Douglas has been rumored to be a rapist for a long time. Mike Tyson was a convicted rapist.

Here's hoping Ms. Leeds sends her bills for additional security and the costs of getting a new phone number to Lou Dobbs. Fox News's address is easy to find online.