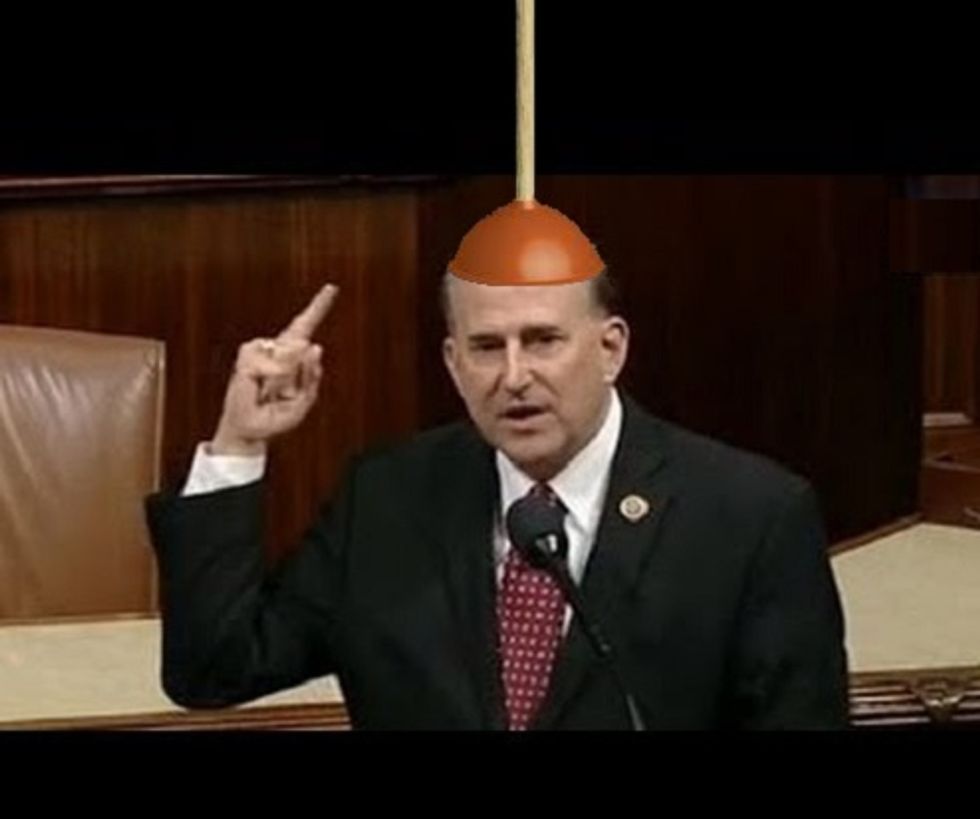 All these Republican wingnut jokesters, making promises they never keep! So Rep. Louie Gohmert (R-Asparagus Aspersions) is very, very upset about the Iran deal, because it's not a treaty, which means Iran won't pay any attention to it, and will therefore Holocaust Israel with nukes, and then it will Holocaust America, and all other kinds of scary things that Gohmert can't spell. But Gohmert had an idea! So he went and put on his Idea Hat (pictured above) and wrote hisself a resolution to force the United States government to treat the Iran deal as a full, balls-out TREATY, because this is the only way to keep the world safe. And he dotted his I's and crossed his T's and zipped up his pants and gave it to Congress, saying, "Here is my treaty, I only had one accident on it."

But, SADNESSES, the Democrats now have all the Senate votes they need to block Republicans from trying to fuck everything up, so Gohmert's little resolution could've been DOA unless he put on his Idea Hat AGAIN!  So he sat back down, unzipped his pants, and wrote A Email to Glenn Beck, and it said words, and Beck read the words on the radio to his cohost "Stu":

GLENN: I just got an email from Louie Gohmert. He said, last week I announced to the world if the House and Senate will treat Iran — the Iran treaty as a treaty, I will not run for my congressional seat again. It’s the only thing that I have left that our leadership wants beside my integrity. And after last week that I spent in Egypt, I feel so compelled to do absolutely everything I can to derail this president’s drastic move towards a nuclear holocaust. I won’t run again if the House voted on my attached resolution and the Senate voted on ratification.

STU: Although I’d hate for the consequence to be Louie Gohmert not in Congress.

So, there are some misleading headlines out there on this story (MENTIONING NO NAMES) that make it sound like Gohmert is saying he's just gonna up 'n' quit, goldarnit, pew pew pew, because the Iran deal's got him so rootin'-tootin' mad smoke's a-'comin' out his ears and his dick don't work no more. That is not exactly what he's saying. Instead, he is being Drama Gohmert. He's saying it is SO important to him, that if he has to sacrifice his congressional career in exchange for Congress doing exactly what he wants it to do, to prevent all the Holocausting, he'll do it, by God.

Indeed, his resolution very specifically states that he's doing this because he doesn't trust the weaselbritches Republican establishment and thinks they're pussies:

“Regardless of what Republican establishment leaders are saying publicly, some apparently believe Iran is going to get nuclear weapons no matter what we do. They reason that if we treat the Iranian agreement as the Treaty it is, and the Senate fails to ratify it, then when Iran gets nuclear weapons, everyone will blame Republicans since we did not ratify the President’s Treaty.”

“However, if Republicans pretend to fight the Iranian deal like our leaders pretended to fight the President’s amnesty, and let the President’s Iran treaty slip through without stopping it, then when Iran gets nukes, everyone will blame the President and the Democrats and the pitiful deal they made with Iran that allowed Iran to get nukes. Then Republican leaders can say that we tried to stop that terrible Iranian Deal but we just did not get the two-thirds we needed in the U.S. House and Senate to vote it down.”

See? Louie is the ONLY one who cares about the nuclear holocaust Iran is going to do to everybody in the entire world, and therefore he's the only one willing to put his ass on the line and threaten to quit his job if his party doesn't do what he says RIGHT NOW DAMMIT.

And what a rock-and-a-hard-place situation that is! We're sure there's somebody in Congress who is like "No, Louie, don't go!" After all, if he left, who would warn us that God is going to smite the American earth with fire, because of the homosexuals? Who would wink wink, nudge nudge, Just Ask Questions about whether maybe Obama loves the terrorists? Who would shame the Republican lady lawmakers, when they dare to vote as if they have vaginas?

But the rest of the universe (many Republicans included, apparently!) pretty much agrees Gohmert is a stupid hayseed who doesn't have any business cleaning toilets on Capitol Hill, much less holding elected office. So we guess that's a vote for "Do his thing, you can cross your fingers and repeal it as soon as Gohmert's done fucking the horse he rode in on and finally leaves."

But, GRRRRR, the Iran deal seems to be pretty good. It's got the support of our allies, and Tom Cotton, the babydick senator from Arkansas, REALLY hates it, so that's pretty much a vote in its favor by default.

So, we hate to say it, but we guess Gohmert will have to keep being maybe actually, for real, the dumbest congressman the state of Texas has ever produced, until the idiots who elected him choose somebody different, or East Texas gets attacked by Iran, which is not going to happen. OR WILL IT?