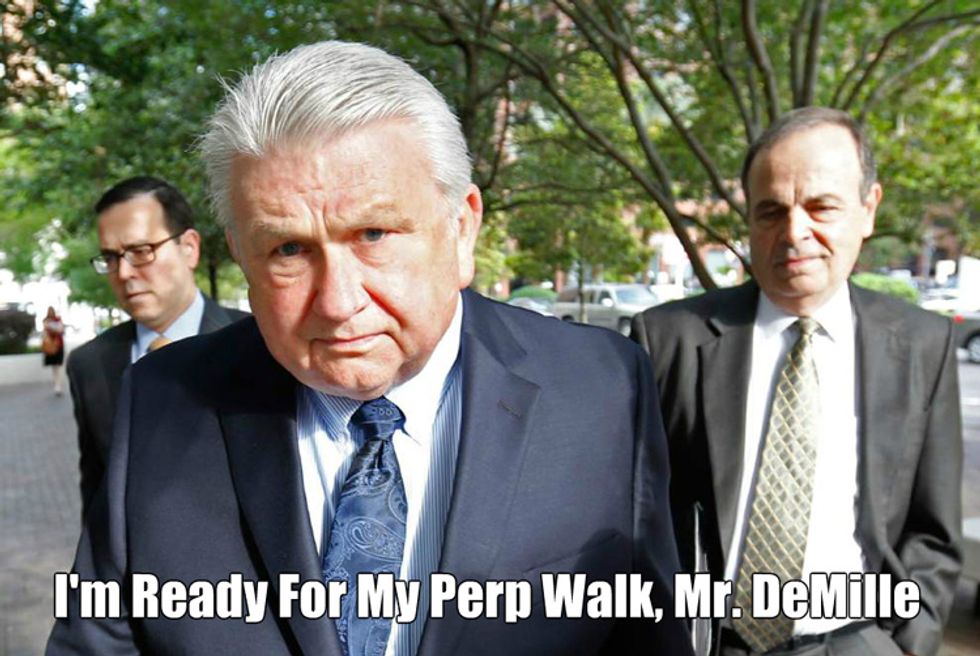 I'm still big. It was my sentence that got smaller.

Hey, if you're sick of stories about cops behaving badly and getting away with it, how about a change of pace? From Louisiana, we have this nauseating story of a district attorney behaving very badly and getting away with it, possibly for decades, but then he got caught! Former St. Charles Parish D.A. Harry Morel pleaded guilty Wednesday to obstructing a federal investigation into his pressuring women into sex in exchange for leniency for themselves or family members. Yes, you may want to take a moment to go vomit. But don't put that bucket away just yet!

"Harry Morel could make things go away, but he wanted sexual acts in exchange," U.S. Attorney Kenneth Polite said. "We suspect that this pattern of conduct has been ongoing for many decades. In fact, we will never know the full extent of it."

One of Morel's alleged victims, 27-year-old Danelle Keim, became a key witness against him. Keim died of a drug overdose in 2013, but investigators said her cooperation with an FBI investigation was instrumental in securing a guilty plea from the 73-year-old, who faces a maximum sentence of three years in prison.

See, told you! Three whole years for interfering with an investigation into his own criming?

Court documents say Morel went to Keim's home following her arrest on DUI charges in March 2010, and engaged in "inappropriate behavior" with her. The filing doesn't specify the nature of that behavior, but does say Morel offered to drop the charges against her. After he left, Keim called 911 to report the pervy old prosecutor, accusing him of sexual assault. In an almost-pleasant surprise, the story doesn't end with the police refusing to believe her:

Keim ultimately agreed to record conversations with Morel for the FBI after he agreed to assist her with new theft and drunken driving charges, according to the court filing.

The FBI also videotaped a July 2012 meeting between Morel and Keim at her home. Morel brought two bottles of wine and again attempted to engage in "inappropriate behavior," the filing said.

"Harry Morel is nothing short of a sexual predator ... His days of victimizing the most defenseless among us are over. He has been brought to justice and will now pay for his crimes."

The court filing claims that Morel also tried to solicit sex from other women between 2007 and 2009, offering leniency for them or their relatives in exchange for sex, but did not provide further details on those alleged cases. Oh, hey, you may want to get that bucket handy again:

In the end, prosecutors did not charge Morel with any sexual crimes. He pleaded guilty to a narrowly tailored charge of obstruction of justice for harassing Keim and pressuring her to get rid of evidence in the federal grand jury investigation that targeted him.

Morel knew Keim's boyfriend had taken photos of him meeting Keim at least twice, and told her to destroy the photos since he knew he was under federal investigation.

"You shoulda got rid of it a long time ago," Morel told her during a 2012 meeting, according to the filing.

As for the other allegations of exchanging leniency for sex, U.S. Attorney Kenneth Polite said the statute of limitations and the lack of concrete evidence of Morel offering women some quid in exchange for a quick pro quo under his desk made a successful prosecution unlikely. So, no, not quite as satisfying an outcome as an episode of Law & Order.

Morel's defense attorneys, who are of course only doing their job, object angrily to officials' descriptions of Moreal as a sexual predator, since this is, after all, merely an obstruction of justice case; they complain the allegations are sleazy prosecutorial smears aimed at influencing Morel's sentencing, set for August 17. "That is both unfair and, in my judgment, impermissible," said his attorney, Ralph Capitelli. Feel free to imagine him officiously adjusting his tie as he said that. Morel will remain free on bond until sentencing; as far as we know, no one in the federal prosecutor's office has offered him a sweeter deal in exchange for a handy.

Yr Friendly Neighborhood Comments Moderator reminds you to review The Rules for Commenting Radicals, and points out that while Harry Morel is indeed a despicable excuse for a human being, you are not to wish death, prison rape, or other horrors upon him. Feel free to wish that he eventually dies of natural causes, completely alone and unloved.