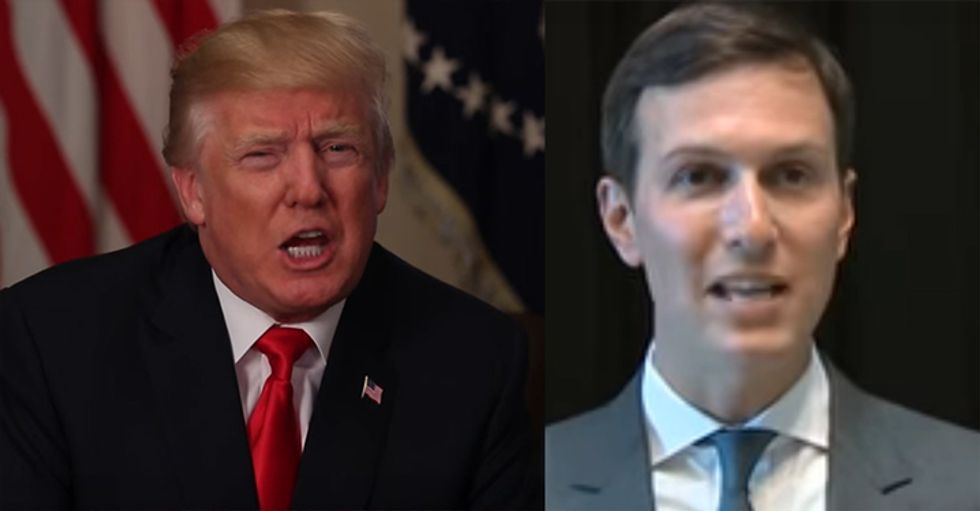 Jared Kushner is one hell of a lucky guy! After watching his father flail around for a year trying to refinance the family's devil building at 666 Fifth Avenue, Jared can now sleep easy knowing that a Qatari-backed real estate company will be there to bail them out. Isn't it nice when things just work out?

The Kushners bought the property for $1.8 billion in 2007, when Jared was all of 26, and his father was in a federal penitentiary in Alabama for hiring a prostitute to sleep with his brother-in-law so he could blackmail him. Families, amirite?

The Kushner clan were already upside-down on their fancy, Manhattan high rise before the market crashed and key tenants decamped. So the family sold off chunks of the building to other investors, and their current business plan seems to be finding tenants to pay 30 percent above market-rate for an outdated building. Which is ... unorthodox!

Oh, and their $1.4 billion loan -- which is greater than the value of their remaining stake in the property -- comes due next year.

Jared sold his share of the business to his family [cough, cough] in 2016, so his father Charlie Kushner led the hunt for capital. After getting left at the altar by Chinese insurance giant Anbang last year, Papa Kushner approached the Qatari Investment Authority in March of 2017, just to tell them he couldn't possibly take their money now that his son is working in the White House. Per WaPo,

Before the meeting, Kushner Companies had decided that it was not going to accept sovereign wealth fund investments. We informed the Qatar representatives of our decision and they agreed. Even if they were there ready to wire the money, we would not have taken it.

Shortly after that meeting, the US government's policy toward the nation of Qatar, led by Middle East guru Jared Kushner, underwent a radical shift. Although Qatar hosts CENTCOM and 40,000 American troops, the White House decided that it was suddenly a state sponsor of terrorism. In May 2017, Donald Trump enthusiastically endorsed the blockade of Qatar by Saudi Arabia and the United Arab Emirates.

(Has Saudi Arabia ever sponsored terrorism? No? Just checking!)

Now, we can't say for sure that Jared Kushner upended US policy toward a strategic ally to punish it for giving his family business the stiff-arm. But we can't help but notice that after Kushner's family got $184 million from Qatari-backed Apollo Capital in November 2017, and the Qataris decided not to give the Mueller team allegedly incriminating info on Jared's ties to the UAE, the US posture toward Qatar swung back to normal. By March 2018, Donald Trump was threatening to cancel a planned Camp David summit with the Gulf Cooperation Council if they wouldn't stop being so mean to the US's good buddy Qatar.

And if Jared was trying to shake down the Qataris, he probably wasn't the only one. Trump superlawyer Michael Cohen is reported to have solicited a $1 million fee and millions for "various members of the Trump family." Because he's a smooth operator!

Last month Trump greeted the Emir of Qatar in the Oval Office.

And Tamim and I have been working for a number of years now — actually, even before the fact — on terrorism. And we’re making sure that terrorism funding is stopped in the countries that we are really related to — because I feel related. But those countries are stopping the funding of terrorism, and that includes UAE; it includes Saudi Arabia; it includes Qatar and others. A lot of countries were funding terrorism and we’re stopping it. It’s getting stopped and fast. Very important. And you’ve now become a very big advocate, and we appreciate that.

Which brings us to today, and how Brookfield Asset Management -- whose largest investor is, ta-da!, Qatar -- has suddenly decided to buy a 50 percent stake in the 666 Fifth Avenue building and spend hundreds of million dollars to renovate the property.

Brookfield, which will take over leasing and operating 666 Fifth Avenue, plans to spend hundreds of millions of dollars to give the 61-year-old building a major face-lift: stripping off the distinctive aluminum facade, installing floor-to-ceiling windows, renovating the lobby and installing new elevators, according to the executives.

After which, they will be able to raise rents by 30 percent and reach full occupancy, even though the building is 60 years old and considered architecturally out-of date. We guess?

Oh, well. We're sure it will all work out. Even without real estate Wunderkind Jared on the case -- his lawyer says he's totally recused and knows nothing about the deal to save his family from his youthful indiscretion which threatens to sink the business his father, mother, brother, and sister depend on.

YOU CAN INSERT YOUR OWN GIF HERE.